The transition was about as subtle as a sledgehammer in watching Brandon Figueroa emerge as the most prominent member of his boxing family.

The unbeaten 22-year old has already established himself as among the best super bantamweights in the world. It’s come at a time when his older brother, Omar has transformed from a once-rising lightweight to a perceived underachiever, the bottom completely following out in a one-sided loss to Yordenis Ugas earlier this summer.

“It obviously sucked to watch my brother suffer his first loss but now it’s my turn to carry on the family name,” Figueroa (19-0, 14KOs) told BoxingScene.com, as he prepares for the first defense of his interim super bantamweight title versus Argentina’s Javier Chacon. 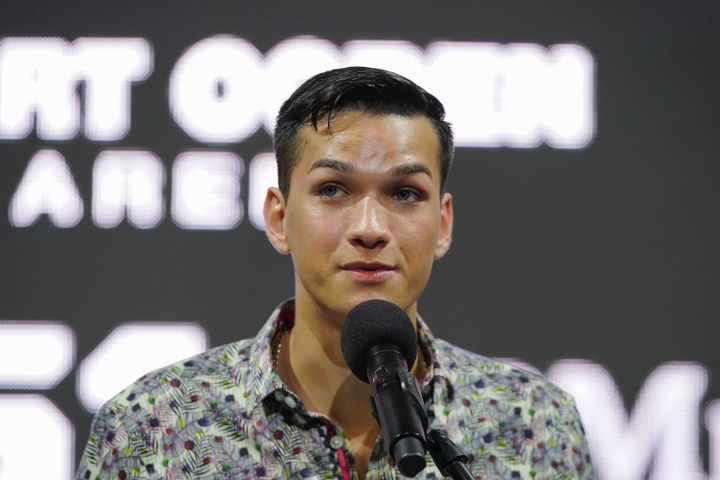 The timing for his first true homecoming couldn’t have been any better, given recent family events along with his own recent industry surge.

Figueroa has been on a roll ever since scoring a 10th round knockout win over former interim titlist Oscar Escandon last September. From there came a crushing 3rd round knockout of former title challenger Moises ‘Chucky’ Flores their title eliminator in July, followed by an interim title win in an 8th round stoppage of veteran Yonfrez Parejo in his most recent performance this past April.

The latter feat delivered Figueroa a 6th consecutive knockout win. He hopes to extend that streak in his first hometown appearance in nearly two years, which just so happened to mark the start of his current knockout run.

“Even that first knockout (a 4th round stoppage of Victor Proa in Oct. 2017 in nearby Mercedes, Texas), I was still growing,” notes Figueroa, who was two months shy of his 21st birthday at the time. “I’m still growing now. My body is finally getting that man muscle and I’m hitting my prime. I have a lot to represent, so I have to keep working hard.”

While the younger brother return home a hero and riding a hot streak, there’s still the need to fly the family banner with even greater pride.

“All eyes are on me,” acknowledges Figueroa. “After his loss, I told Omar, ‘Pick your head up and get back to work; you live and learn.’  It was weird, I kind of felt like I became the older brother, but we are always there for one another.

“Omar will be back. In the meantime, it’s my time to shine, and to show that that Team Figueroa is still out there. We won’t cave in. We’re a team. I have to push him just as he’s always pushing me. I’m grateful for this chance to headline on Fox Sports, and motivated more than ever to remind everyone what our family represents.”

Big brother can't lay off the sauce long enough to get it together. Smh

Is he any good? Whoever matchee omar against ugas is a ****ing moron