UNCASVILLE, Connecticut – Brandon Figueroa gave Damien Vazquez everything he asked for and then some Saturday night.

The relentless Figueroa battered Vazquez throughout their fight, until referee Gary Rosato eventually prevented Vazquez from taking more punishment at 1:18 of the 10th round at Mohegan Sun Arena. Vazquez tried to slug it out with the bigger, stronger Figueroa, but the WBA world super bantamweight champion overwhelmed him with pressure and volume punching that made their scheduled 12-round, 122-pound championship match completely lopsided.

Figueroa made the third defense of the WBA’s secondary super bantamweight championship. He fought to a 12-round split draw with Mexico’s Julio Ceja (32-4-1, 28 KOs) in his last fight, a back-and-forth brawl November 23 at MGM Grand Garden Arena in Las Vegas. 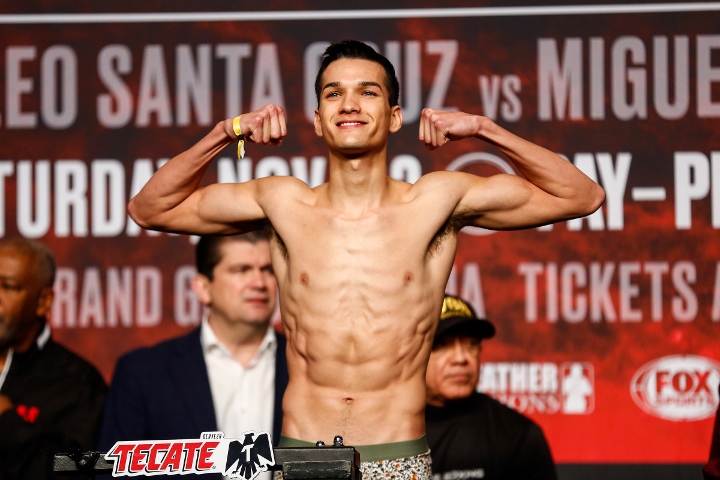 “I felt good,” Figueroa said. “I knew the pressure was gonna work. He’s a lot tougher than I expected. You know, he lasted 10 rounds, and I was punishing him to the body, the head. … I had to switch lefty because he was coming in with his head a lot. I didn’t want him to head-butt me and give me a cut, so that’s why I switched lefty and I tried to box him lefty.”

Figueroa was surprised Rosato didn’t stop their fight sooner than he did.

“He was taking a lot of punishment,” Figueroa said. “He was just throwing a jab and trying to survive. But, you know, he’s tough. I’ve gotta give him credit where credit is due. He came to fight, and he proved that he deserves to be in the ring with me. And, you know, he was very tough, but I knew that with pressure, he wasn’t gonna last 12 rounds.”

Figueroa viciously assaulted Vazquez throughout the ninth round. Vazquez bravely survived Figueroa’s onslaught, but a ringside physician took a close look at Vazquez before he allowed him to start the 10th round.

Figueroa picked up right where he left off by hammering Vazquez with body and head shots to start the 11th round. Rosato finally stepped between them, with a vulnerable Vazquez still on his feet, eating unnecessary punches.

Following a solid seventh round for Vazquez, Figueroa went after him at the start of the eighth round and landed several thudding punches that backed Vazquez against the ropes. Vazquez eventually hold Figueroa tightly to stop him from punching temporarily.

Vazquez, bleeding from a cut over his swollen right eye, had more success during the seventh round than he had in previous rounds.

An aggressive Figueroa unloaded several flush rights and lefts to Vazquez’s head just after the halfway point of the sixth round. Vazquez looked like a beaten boxer when he sat down on his stool following that one-sided, three-minute period.

Figueroa continued pressuring and battering Vazquez to his head and body throughout the fourth and fifth rounds. Vazquez tried his best to fight back, but Figueroa remained in his chest.

Figueroa backed up Vazquez for most of the third round and went after his body. Vazquez had difficulty keeping Figueroa off of him, and tried his best to trade with his bigger, stronger opponent.

Figueroa applied pressure throughout the second round and appeared to start wearing down Vazquez. He drilled Vazquez with a straight left hand when there were just over 30 seconds to go in the second round.

They spent the remainder of the first round trading hard shots from the inside.

Man Figueroa is the man he has a nice style, with his frame he can probably win titles up to 135. He looks like one of the best p4pers under 126 if not thee best

[QUOTE=Kannabis Kid;20780754]I saw that interview a while back and I'm not going to paraphrase because I'm not 100% sure off the top but it was something along the lines about the perception of fighters being treated badly cause of color…

[QUOTE=Boxingfanatic75;20780305]No! I hadn’t heard about this! Wth! Freaking weak society these days. What he say?[/QUOTE]I saw that interview a while back and I'm not going to paraphrase because I'm not 100% sure off the top but it was something along…

[QUOTE=Kannabis Kid;20780273]Lol that's not what he means he meant like you don't know? He got fired bro for making some remarks pretty dumb but this is the sensitive revolution.[/QUOTE] No! I hadn’t heard about this! Wth! Freaking weak society these…

[QUOTE=Boxingfanatic75;20780256]Yes! He’s one of the absolute best. Mares is a freaking bore[/QUOTE]Lol that's not what he means he meant like you don't know? He got fired bro for making some remarks pretty dumb but this is the sensitive revolution.