Their bout is scheduled for July 28th at the O2 Arena in London.

The contest is Brook's second fight at 154-pounds. He made his debut at junior middleweight in March, and blew away Sergey Rabchenko in two rounds. 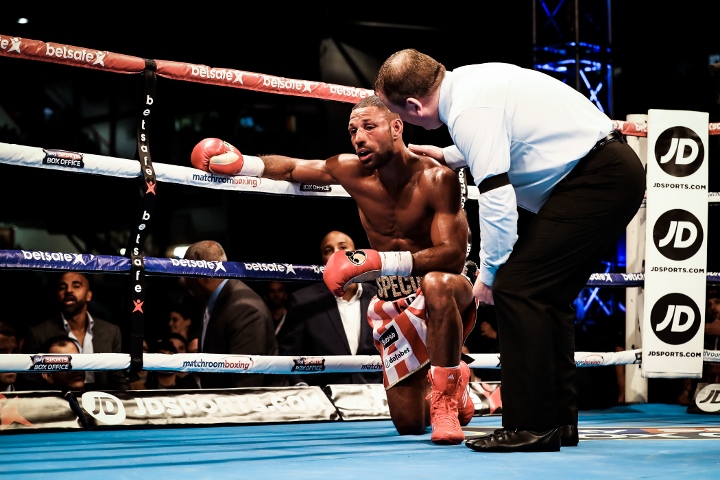 Cook holds a stoppage victory over talented contender Steven Butler, but he also lost in his very next fight, by knockout, to talented Kanat Islam.

Since suffering his first career defeat, Cook has won two fights in a row - both by knockout.

Cook is planning to do a lot of damage to the face of Brook - who suffered facial injuries in two of his last three fights.

Cook believes he has the necessary power to break the bones in Brook's face for a third time.

“If I can start landing good punches on his face and hurt..and make that injury come back it is going to be good for us..but not for him obviously. I am just going to hit him as much as I can. If I hit you on the button you are going down," Cook told Boxcaster.

“I’m no stepping stone. I’m coming for a fight. I will enjoy the moment, the biggest of my life. This is a real good opportunity that could change my whole life. I am just hoping it goes to plan.

“He has one of the best one-twos in boxing. Brook is one of the best in the world; I was watching him when he first started boxing. I never thought in my life I’d be fighting him. This is an opportunity to make a name for myself. They have no clue what’s going to happen. I might be some nobody from Canada but this nobody is going to come to his back yard coming to fight. Once the bell rings I hope he’s ready because I will be ready.”

[QUOTE=paulf;18916621]What rolodex of obscure Canadian boxers did Hearn find this guy in? Embarrassing.[/QUOTE] He is ranked a lot higher then you are? [url]http://boxrec.com/en/boxer/559487[/url] Kudos to BC for stepping up his competition unlike so many divas out there not making fights,…

[QUOTE=paulf;18916621]What rolodex of obscure Canadian boxers did Hearn find this guy in? Embarrassing.[/QUOTE] He got KOd by a plastic jug before

[QUOTE=GlassJoey;18915828]There’s only one eye socket left him to break..... I think Brook has steel plates all over his head now so this cool guy will be lucky to do anything other than make Brook look good. Brook should fight Lo…

[QUOTE=mapleleaf27;18916550]whats the beef with Canada?[/QUOTE] They just don’t have a history of producing tough fighters. I like Canada as a nation.

Does Brook even have either orbital bone left? Didn't both of them already get smashed to pieces? I'm pretty sure both of Brook's eye bones are just metal plates now. Which isn't really fair. It is really hard to break…