Brandon Adams had less than a week to prepare for the opponent he would ultimately meet in the ring.

All he needed was 4 ½ minutes to make a statement. 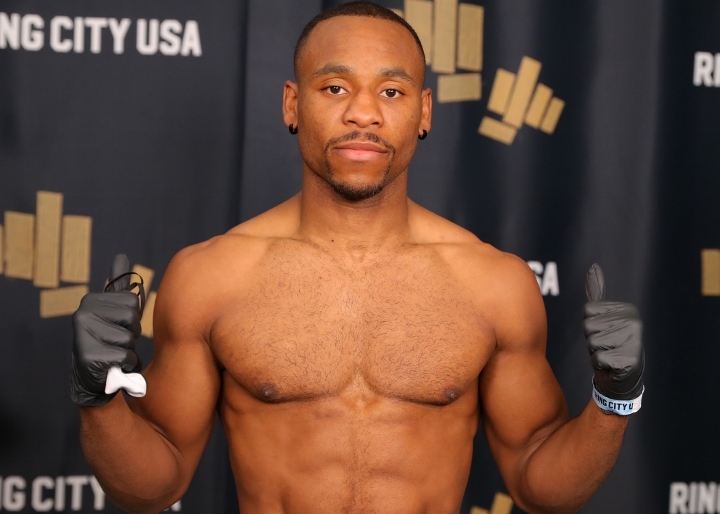 Adams had Duversonne trapped along the ropes, forcing referee Jack Reiss to stop the contest at 1:42 of round two in their NBC Sports Network-televised main event.

Duversonne accepted the fight on less than one week’s notice, replacing unbeaten knockout artist Serhii Bohachuk (18-0, 18KO) who tested positive for COVID-19. The bout came just four weeks after the rangy boxer-puncher from Central Florida came up just short in a disputed eight-round decision defeat to Chordale Booker at nearby Staples Center in downtown Los Angeles.

Despite the quick turnaround, Duversonne still found himself following the lead of Adams in the opening round though warming up toward the end of the frame. Adams rattled off power shots in combination, closing the gap against his much taller foe. Duversonne found his groove in the closing seconds of the round, landing a right hand and left hook.

Adams jumped out to a quick start in round two, letting his hands go against a defensive-minded Duversonne. A left hook by Adams had Duversonne rocked and trapped along the ropes. Referee Jack Reiss repeatedly warned Duversonne to find a way to get out of trouble, but Adams refused to let him off the hook—literally. A compact left hook at the tail end of a flurry of punches forced the referee to stop the contest.

Duversonne falls to 11-3-2 (8KOs), with all of his career defeats coming in his last three starts spanning just 55 days.

The win was much needed for Adams, who improves to 22-3 (14KOs). The bout was his first since a 12-round loss to Jermall Charlo in a failed middleweight title bid last June and his first victory since a 10-round decision win over Shane Mosley Jr. in November 2018 to win season five of The Contender.

As for his future, revisiting a showdown with Bohachuk is not out of the question.

“I’m not prepared to turn nothing down,” Adams told NBCSN’s Curran Bhatia after the win. “If the opportunity presents itself, you damn right we gonna fight.”

I was surprised that Adams went the full 12 with Charlo at Middleweight, since I always felt he was too small for 160. I think a big reason he won the Contender was because he seemed the most comfortable staying…

This card was good. I’m loving these fights so far. I hope that they can continue hosting these Ring City USA cards from the Wild Card gym. Brandon Adams put on an impressive performance as well.

Missed it, forgot all about this Card but Congrats to Adams for the bounce back from the Charlo fight which he fought tough in

The next main event looks good, hopefully it doesnt fall through as well. Overall liking these ring city cards hearing all the stories about wild card.. When all this covid **** blows over a bit they should try this at…