Bradley: I Don't Think Lomachenko Will Go To 140 For Pacquiao

Former Manny Pacquiao foe Tim Bradley believes the Filipino has "too much experience" for Lucas Matthysse.

"I think it's a great fight. I think both guys are towards the end of their career right now," Bradley told ESNEWS. "Even Pacquiao, being the age that he is and [having] been through the wars that he has, I think [with] the speed and the power he's going to give Matthysse problems." 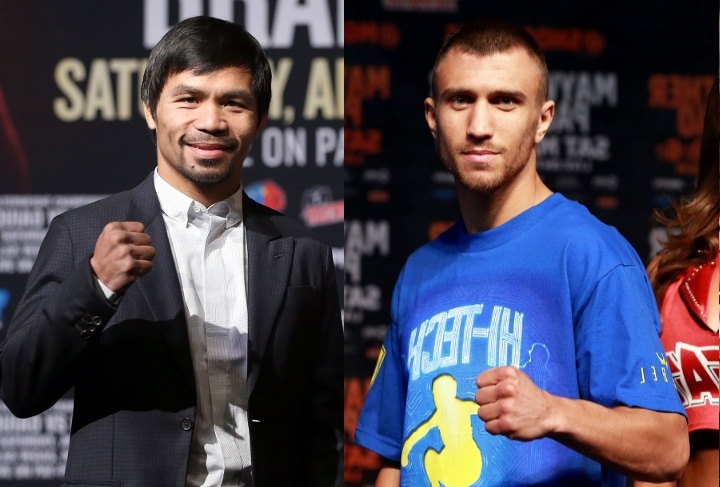 Matthysse is known for his power, with 36 of his 39 victories coming before the final bell. Last week, former world champion Ronald 'Winky' Wright warned Pacquiao not to stand and trade.

Bradley echoed that sentiment, but is confident 'PacMan' will outbox the Argentine: "Matthysse's got that one knockout punch, that right hand. He can punch really hard with the right hand.

"He'll have his opportunities, but I just think Pacquiao has too much experience and will still be able to outmanoeuvre the younger guy."

Speculating about who Pacquiao could face next if he wins in Malaysia, Bradley admitted he would love see the 39-year-old take on Vasyl Lomachenko, who became WBA lightweight champion by knocking out Jorge Linares in May.

"Everybody wants to see that," explained Bradley. "Who wouldn't tune in to see Pacquiao and Lomachenko go at it? That's a great fight, but I don't think Loma will go up to 140lbs to face him."

P4P King stated multiple times he will fight Manny at 137 lbs (+ rehydration clause) Manny must come down, while on his way out.

He'd be a dummy not to. It'd be Pacquaiao vs De La Hoya all over again.

Vasya stated still, that he won't go to 140. whats the point of all this talk

[QUOTE=SAN D13GO VILLAN;18929507]Why is it ok for manny to runaway from the division he has been fighting for years now that it's hot??? I wanted to see old lion vs young lion in Crawford vs Pacquiao... Try to get his…