Brad Foster wasn’t happy, but at 22-years-old, and just four years after taking up boxing, he had a Lonsdale Belt for keeps after successfully defending his British and Commonwealth super-bantamweight titles against James Beech Jr at the BT Sport studios in East London.

Foster started well and finished strongly, generally outworking Beech during the 12 rounds. Beech gained a foothold in the middle rounds and dug deep, but Foster kept on the pressure, picked his punches well and switched stances like a veteran. Not that he had impressed himself.

“I’m a bit tired, I didn’t feel the best in there, but I got the win and took these belts home and that’s the main thing.” 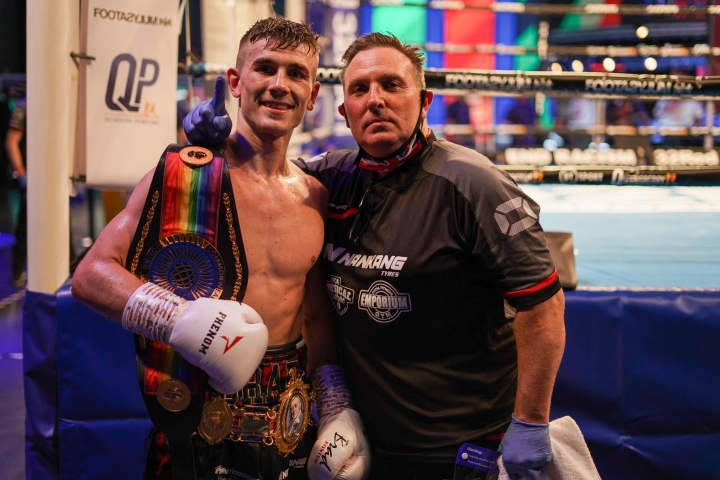 A British champion only gets to win the belt outright with three winning defences. This was the fourth defence of the title he had won just 16 months ago, although one of those was a draw.

“This was one of my goals coming into boxing and it means the world,” he said.

Foster made a good start, forcing Beech onto the backfoot with a relentless attack to head and body. But after the third round, Beech started coming back into things, forcing Foster to stand and trade.

Beech was hampered by a cut over his left eye early on from a solid left jab and, although Foster was cut too, it was the challenger who was looking banged up by the latter rounds.

The seventh was a tough round for Beech, though, as Foster moved into a different gear and while Beech had a good ninth, Foster came on strong in the last three rounds. Beech looked exhausted in the final round and slumped back into the ropes after a Foster body shot, which was followed up.

All three judges scored the fight to Foster, Michael Alexander making it 116-113, while Howard Foster and Terry O’Connor both scored it 117-111. The referee, who issues some stern warnings about use of the head, was Marcus McDonnell.

“If all the fans had been here it would have been a cracking event,” Foster said, who is behind Gamal Yafai in the queue to get a European title shot.

“I do feel tired. With this lockdown, all I have been doing is working and training, there is no play. You have to have a rest to go out with your mates, go have a dance, a boogie and I haven’t been able to do that.

“I don’t drink, so I just go out for a dance, a little two-step and I can’t wait to do that with my boys.”

I am happy that Brad Foster got the win, but sad that I was working during this boxing card. I have the fight right now and I am going to see it after UFC 251 in the early morning. :boxing: