25-year old Gervonta Davis (23-0, 22 KO) has mostly treaded water in the ring since a breakthrough win over Jose Pedraza in 2017, facing little in the way of the better challenges at Jr. lightweight or lightweight while being built into one of the more promising new draws in the sport.

Davis’s ticket sales are real, his power is real, and this weekend the opposition starts to catch up. 32-year old Leo Santa Cruz (37-1-1, 19 KO) has held belts in four weight classes, starting at bantamweight and currently holds the primary WBA belt at 126 and 130 lbs. Santa Cruz can validate his fourth title with a win over Davis, who never lost the WBA super title before testing the water at lightweight. Santa Cruz has mostly been on cruise control in his career since a rematch win over Abner Mares but he’s pushing his limits here.

The primary WBA belt at lightweight is held by Teofimo Lopez so this shouldn’t really count as a fifth title if he snares Davis’s WBA sub-title at the weight (the intended weight for this one is 130) but put the belts aside. It’s a proven veteran in his fourth weight class against a dangerous puncher looking to prove his worth in a fight where the physical dimensions of the competitors carries at least a similarity to Arguello-Pryor. That one turned out well for fans. This one should too. 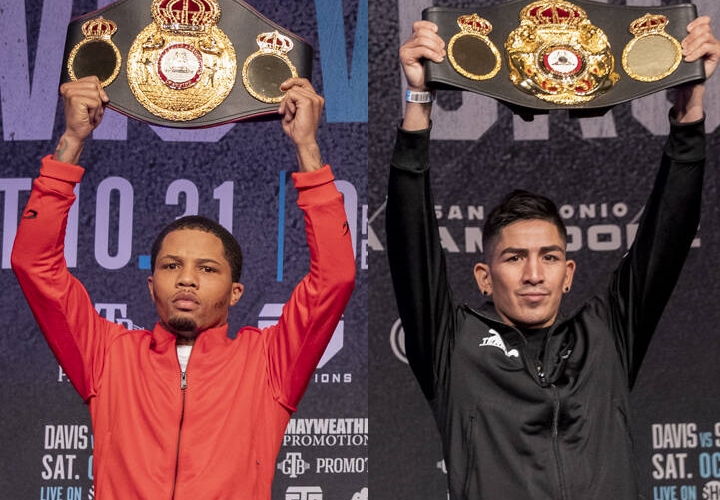 24-year old former Jr. middleweight titlist Jaime Munguia (35-0, 28 KO) makes his second start in pursuit of middleweight contention. Munguia has shown a lot of vulnerability but he makes good TV. How he’s managed, and if he can start to grow his game, will determine his ceiling. 36-year old Tureano Johnson (21-2-1, 15 KO) has played on the fringes, often making good fights, for years. He has a chance for a career best in what could be a dramatic affair. Elwin Soto defends his Jr. flyweight belt on the undercard.

Injuries and COVID have conspired to derail the momentum of 33-year old former cruiserweight king Oleksandr Usyk (17-0, 13 KO) since he rose to heavyweight. Usyk makes only his second start in the last two years against 36-year old Derek Chisora (32-9, 23 KO). Chisora is a recognizable name but unlikely to be much risk with Usyk eyeing a mandatory crack at Anthony Johsua (or a belt Joshua leaves aside for more important affairs with Tyson Fury). Still, one of the most skilled practitioners in the game is typically worth a look and Chisora can be fun when he’s locked in.

This could just as easily have been the pick of the week. Anytime “The Monster” is on air, it’s must-see TV. 27-year old Naoya Inoue (19-0, 16 KO) returns from his Fight of the Year victory over Nonito Donaire to defend the WBA, IBF and Ring Magazine belts. He missed a chance to add another alphabet strap when COVID scrapped a unification with Johnriel Casimero. That would be a date to circle in 2021 if they can resume the course toward hostility but 29-year old Jason Moloney (21-1, 18 KO) will have something to say about. It’s a top ten clash in a quality weight class. Also on tap, Olympian Mikaela Mayer (13-0, 5 KO) chases her first belt against Ewa Brodnicka (19-0, 2 KO) at Jr. lightweight. A solid show on the Plus.