Silly social media boxing isn’t this scribe’s thing but a lesson seems to have been learned from the last round of it. This time, they’ve come up with a pretty stacked card to hopefully build off the extra eye balls. Andrade (28-0, 17 KO) will defend the WBO middleweight crown against Keeler (17-2-1, 5 KO), staying busy until something better comes along. It’s probably the least enticing of three major title bouts. The IBF Jr. lightweight titlist Farmer (30-4-1, 6 KO) faces Diaz (30-1, 15 KO) is a bout built with lots of trash talk.

Diaz’s only loss was a highly competitive affair with featherweight titlist Gary Russell. Unified Jr. featherweight beltholder Danny Roman (27-2-1, 10 KO) returns for the first since last April against Akhmadaliev (7-0, 6 KO) who is low on pro rounds but high on Amateur pedigree with an Olympic appearance and a Silver medal at the World Championships in 2015. Throw in multi-division champion Amanda Serrano and this is a hell of a way to head into the weekend. 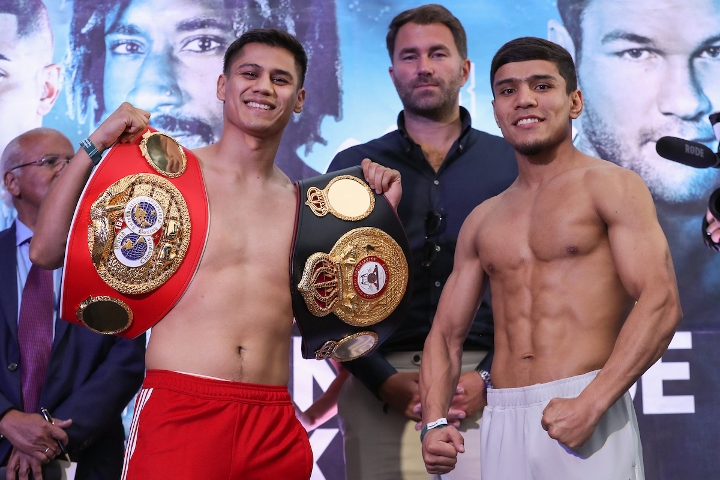 Undefeated Jr. bantamweights headline in this one. Jade Bornea (14-0, 10 KO) of the Philippines is making his US debut and faces his third undefeated opponent. Ernesto Delgadillo (11-0-2, 2 KO) is coming off a win over undefeated Nate Green.

Welterweight Yordenis Ugas (24-4, 11 KO) turned heads last year when he came up just short in a challenge of Shawn Porter for a belt in the division. He’s seemingly aimed at another title shot sooner than later. Dallas (23-3-2, 11 KO), 4-0-1 since a knockout loss to Lucas Matthysse, could change the course of his career if he can upset the apple cart.

The maiden voyage of the Impact network, a Christian broadcast outlet, into the sweet science kicks off with former Jr. middleweight titlist Austin Trout (31-5-1, 17 KO). Trout is 1-3-1 in his last five fights but the losses came to the Charlo brothers and Jarret Hurd. He competed like hell with all three. Rosbel Montoya (17-9-1, 13 KO) is in the way of one more chance at bigger things.

That looks like a great fight but is on a different card next day. [MENTION][MENTION][QUOTE][/QUOTE][/MENTION][/MENTION]

No mention of Ilunga Makabu vs Michal Cieslak?