Vergil Ortiz Jr. saw his 2018 campaign end in anti-climactic fashion, the recipient of a medical form from the New York State Athletic Commission denying him a boxing license due to having received Lasik eye surgery just two months prior. It cost him a showcase slot on the undercard of Saul ‘Canelo’ Alvarez’s first career appearance at New York City’s famed Madison Square Garden, but provided him with plenty of motivation to ensure that his 2019 campaign was one to remember.

Twelve months and four knockout wins later, it proved to be great enough to land honors as the BoxingScene.com 2019 Prospect of the Year.

“I would grade this year as definitely A+. I’ve fought some quality opponents,” Ortiz Jr. (15-0, 15KOs) said of the year that was, with three of his four foes in 2019 having previously never been stopped prior to facing the hard-hitting Dallas, Texas native.

Ortiz entered the year having never before been extended past the third round of any given prizefight, and having fought just 19 combined round through 11 pro fights. That statistic was bound to change a mere 26 days into 2019, as Golden Boy managed to line up a quartet of opponents who between them have suffered just one stoppage loss—Jesus A. Valdez, a Mexican southpaw and 28-fight veteran whose lone defeat inside the distance came at the hands of Jesus Rojas who would go on to win a secondary featherweight title.

Fittingly, Rojas fought on that same Jan. 26 card in Houston, Texas, losing his title to Xu Can. By then, Ortiz had already begun his Prospect of the Year run, picking up his first win of the year when a cut over Valdez’s left eye prompted a stoppage after five rounds. There weren’t any knockdowns in the bout, nor any real sense of satisfaction from the winner.

“I felt like I could’ve done better,” Ortiz said of his performance. “It didn’t go—or end—how I wanted it to go.”

The rest of his year most certainly would.

A little more than three months later came the Canelo undercard showcase Ortiz sought to end his 2018 run. It landed on a Cinco de Mayo themed show topped by Alvarez’ three-belt middleweight title unification win over Daniel Jacobs this past May in Las Vegas. The preliminary portion of the evening saw Ortiz collect by far his best win to date, tearing through former interim titlist Mauricio Herrera in three rounds, in a bout that marked his official arrival at welterweight after outgrowing the junior welterweight division. 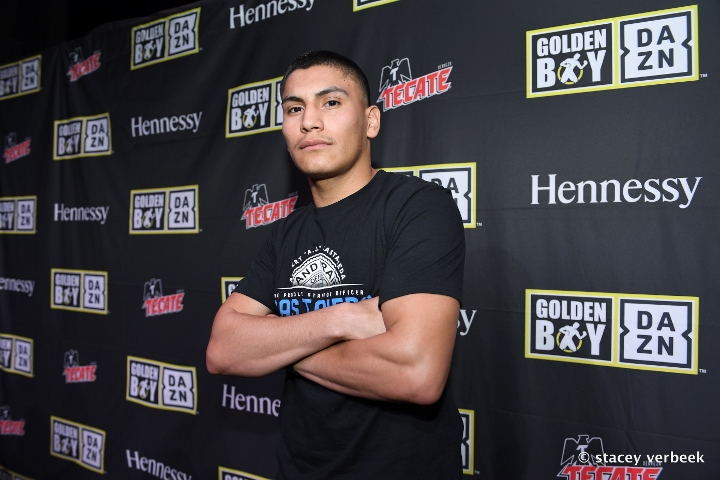 Given his performance and the two more to follow, it was clear that he was also quickly outgrowing prospect-level competition.

From there came the type of risk rarely taken by a rising prospect headlining his first hometown card. An August 10 show in Ortiz’s hometown of Grand Prairie, Texas came with the challenge of facing former title challenger Antonio Orozco, a no-nonsense contender whose lone defeat was a points loss to 140-pound titlist Jose Ramirez.

“Look, if we saw Vergil struggle with Mauricio, or even earlier this year with [Valdez], then sure we slow him down,” Roberto Diaz, executive matchmaker of Golden Boy Promotions told BoxingScene.com of its rising young star at the time. “But when you give him fighters who’ve never been stopped before and he’s running through them like nothing, we have to keep raising the bar.”

The goal was accomplished only in Ortiz being extended into the 6th round for the first time, fittingly coming in his first-ever scheduled 12-round bout. It merely provided him with his deepest knockdown to date, flooring the normally relentless Orozco three times in forcing the stoppage win.

Once again, Ortiz managed to exceed all expectations—even his own.

“I took [opponents] out when some people didn’t believe I would—including me,” Ortiz would admit of the win. “I’ve really shown that I really belong with the top dogs.”

If there was any critique of Herrera and Orozco in terms of what they provided for the 21-year old, it’s that they were there to be hit and their naturally aggressive style complementing that of Ortiz.

Few thought it would be the case when Golden Boy announced slick welterweight Brad Solomon as his final opponent of the year. For a rising welterweight with title aspirations in the year ahead, it was a challenge he was willing to accept and conquer.

“It’s another different style to face, to show that I’m ready for the best welterweights in the world,” Ortiz told BoxingScene.com ahead of their Dec. 13 fight at Fantasy Springs Casino in Indio, California. “All my fights have ended early, so boxing fans haven’t yet seen everything that I can do.

“I don’t know if (Solomon) is the guy to bring that out, but it will be a different look for however long he can stick around.”

Ortiz’s words proved prophetic, relying on a blend of boxing and banging to score a 5th round stoppage of Solomon, who—like Orozco before him—had only lost once before and in a distance fight.

That changed for the worse in less than five rounds, as Ortiz boxed early before dialing up the pressure in round four when Solomon was sent to the canvas for the first time in the bout. Two more knockdowns came in round five, the final one courtesy of a pair of left hooks to the body which prompted an end to the fight.

It also put an end to the Prospect of the Year race, with the biggest question in 2020 being just how high the rising welterweight can fly.

“This kid is a future star, and it’s not just us saying it,” insists Diaz. “Everyone in the industry sees it. So, we have a responsibility to make sure he’s developed the right way and not just fed soft touches.”

The step up in class has raised Ortiz’s game and profile.

“I feel like people are starting to recognize me more,” notes Ortiz Jr. “This was my breakout year and next year I’m going to break out even more.”

FIVE MORE TO WATCH IN 2020 (IN ALPHABETICAL ORDER)

Janibek Alimkhanuly (8-0, 4KOs) - The 2016 Olympic quarterfinalist from Kazakhstan is just eight fights into his pro career but already has his dream team—Hall of Fame promoter Bob Arum, manager Egis Klimas, renowned cutman Russ Anbar and Hall of Famer former two-division titlist and current head trainer James ‘Buddy’ McGirt—already eyeing a path to middleweight title contention in the year ahead. Alimkhanuly—who turns 27 in April—went a perfect 4-0 on the year, including his being extended 10 rounds for the first time in his young yet rapidly ascending career in a virtual shutout of Cristian Olivas in April. Knockout wins over Steven Martinez, Stuart McLellan and Albert Onolunose round out his impressive rise this year.

Chris Colbert (13-0, 5KOs) - The 23-year old junior lightweight began his year with a lopsided victory in his Brooklyn hometown and ended 2019 with four wins and news of an interim title fight. With each fight came a steady increase in competition level, with Colbert emphatically proving that there is plenty of substance behind his style. The rising young prospect—who fights under the Premier Boxing Champions banner—drew rave reviews from many in the industry and even the originator of his ‘Prime Time’ moniker, Hall of Fame NFL legend Deion Sanders whom Colbert paid tribute in the ring outfit for his final win on the year—a crushing 1st round knockout of Miguel Beltran Jr. to convince his handlers to take his career to the next level. The message was received, as he will next face former 130-pound champ Jezreel Corrales in January. The absurd interim title aside, a win over the veteran boxer from Panama City will launch Colbert firmly into true title contention.

Daniel Dubois (14-0, 13KOs) - Having gone the distance for the first time in his career in his last fight of 2018, England’s Dubois never came close to hearing the scorecards in any of his five fights in 2019. The 25-year old heavyweight fought a combined 14 rounds on the year, five of which came in his best win to date— a 5th round stoppage of Nathan Gorman in their battle of unbeaten prospects this past July. Blowout wins over Ebenezer Tetteh and Kyotaro Fujimoto helped keep him active, as the 6’5” Dubois now sets his sights on bigger game in 2020—literally, as he aims for shot at 6’6” countryman and 2016 Olympic Silver medalist Joe Joyce.

Jaron Ennis (24-0, 22KOs) - The 22-year old phenom was poised to top this list following the end of his 2018 campaign, only for promotional issues keeping him out of the ring for much of 2019. The youngest member of a boxing family—whose older brothers Derek and Farah were also pro boxers—was finally able to return to the ring in September, even as his promotional status remains a matter on which for a courtroom judge to rule. In the ring, the unbeaten welterweight is free of conflict, scoring a pair of blowout wins to help set up what figures to be a big 2020 campaign. First out the gate will be a January 10 clash with Bakhtiyar Eyubov in Atlantic City, in what should mark a significant step towards emerging as a welterweight contender by this time next year.

Israil Madrimov (4-0, 4KOs) - The crushing junior middleweight—who turns just 25 in February—perfectly fits the mold of manager Vadim Kornilov, who has one of the best eyes for talent in the game today and who loves to aggressively match his clients. Madrimov continues to rise to the occasion in such a short time, having fought scheduled 10-rounders since his pro debut last November. The former amatuer standout from Uzbekistan—who now lives in Indio, California where he trains under the watchful eye of Joel Diaz—has yet to need more than six, which also came in his pro debut. His three wins in 2019 have come against opponents with a combined 96 fights between them. Madrimov ended his three-knockout campaign with a 5th round stoppage of Alejandro Barrera in October, delivering a statement-making performance that has his co-promoter Eddie Hearn (along with World of Boxing) already talking about a title run in the year ahead.