Roughly the same time one year ago, Shinsuke Yamanaka and Anselmo Moreno ended their bantamweight title fight with more questions than answers.

Their rematch this past September not only resolved all lingering issues, but produced the type of high-level drama worthy of being celebrated as the BoxingScene.com 2016 Fight of the Year.

Such honors tend to come in championship contests featuring five knockdowns and non-stop punching in the moments when both boxers are on their feet. It was exactly what was provided in their highly anticipated sequel on September 16 in Osaka, Japan.

The major question going in was where exactly Yamanaka stood among today’s best bantamweights and among the best boxers in the world. The long-reigning bantamweight titlist from Tokyo showed signs of perhaps slowing down after struggling to a highly questionable split decision win over what was supposed to be a faded version of Moreno, the visiting former champion from Panama who turned in his best performance in years.

It wasn’t enough to sway two of the three judges, but the final verdict came into question enough to convince the World Boxing Council (WBC) to sanction a rematch.

Yamanaka did his best to prove it was just one rough night at the office, proven in soundly outpointing former super flyweight titlist Liborio Solis in March, overcoming two knockdowns to score two of his own. The win looked even better after watching Solis outbox another bantamweight titlist in Jamie McDonnell in November, only to fall prey to perhaps the worst decision of 2016 as McDonnell retained his title.

Still, the defending unbeaten champ wasn’t going to be let off the hook unless he proved it versus the man who made him look like less than the very best bantamweight in the world. With that in mind, he wasted no time in their rematch, flooring Moreno with a counter left hand shot in the very first round.

Sweet revenge was soon to follow, right? Well… yes, but not before both boxers were dragged through hell and back.

Moreno dusted himself off and fought back as hard as he could with a style in stark contrast to his career-long scouting report. The charm that came with his six-year bantamweight title reign (May ’08-Sept. ’14) was his ability to make his opponents look foolish, a style so slick and frustrating he often drew praises as South America’s answer to legendary Hall of Fame former four-division champ Pernell ‘Sweet Pea’ Whitaker.

Those days and his optimal skill level behind him, the 31-year old southpaw decided the best course of action was to dig in and trade. A new style for a faded former titlist versus an unbeaten foe who’d just put him on his ass didn’t figure to boast favorable results.

But it did… at least until it didn’t.

Yamanaka’s dream start quickly evolved into a nightmare. He was up on all three scorecards through the first three rounds before finding himself deposited on the canvas. A right hook to the sweet spot of his draw floored Yamanaka for just the fourth time in his career, although it was the third such occasion in his last three fights.

Not only did all the questions of his current status resurface, but it came as boxing fans knew something special had now developed.

Ever the champion, Yamanaka rode out the bout’s worst moments, well aware that he had to dig deeper than ever before not only to retain his title but prove he was superior to the boxer who’d made him look ordinary just one year prior.

That drive and motivation translated into a power-punching frenzy in round five, but Moreno wouldn’t wilt. Instead, it was the Panamanian southpaw who scored the round’s most telling blow, as a savage right hook once again had Yamanaka in trouble. Efforts to ride the wave of momentum into round six instead proved disastrous.

A booming left hand shot that seemed to begin from the rafters came crashing down on Moreno’s chin in round six, thus permanently changing the bout’s course of action. Surviving perhaps the roughest 17 rounds of his career to that point, Yamanaka finally saw daylight and decided this one needn’t be left in the hands of the judges.

Two more knockdowns followed in round seven, the latter of which provided emphatic closure to their two-fight set as Yamanaka was hailed the knockout winner at 1:09 of round seven.

Additionally, it provided the boxing world with the reminder that Shinsuke Yamanaka is in fact one of the very best boxers in the world

Ultimately, it provided BoxingScene.com with its choice for 2016 Fight of the Year. 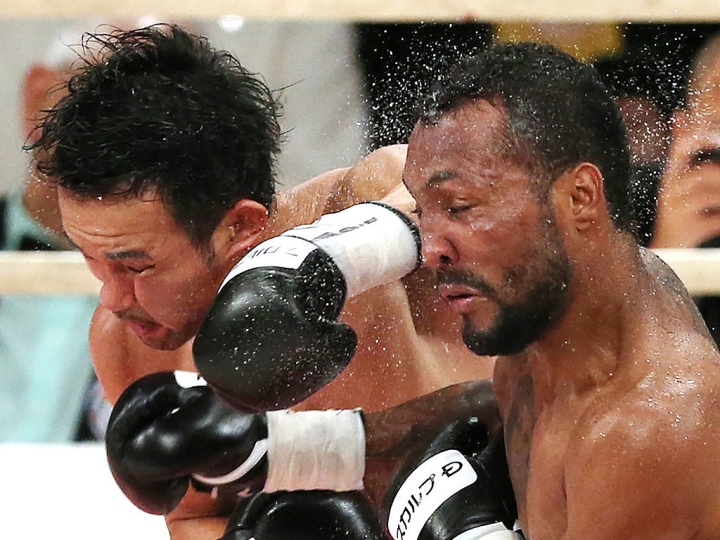 THE VERY BEST OF THE REST

Carl Frampton MD12 Leo Santa Cruz (7/30/2016, Barclays Center, Brooklyn NY): Frampton’s two wins in his 2016 Fighter of the Year campaign couldn’t have come in starker contrast. His highly anticipated title unifying grudge match with longtime rival Scott Quigg in February devolved into a game of pitty pat, as he pawed his way to victory over 12 painfully boring rounds. He expected a much more furious pace of action in moving up to face an unbeaten three-division titlist in Santa Cruz – and got that and more as fans on hand at Brooklyn’s Barclays Center and viewers at home watching on Showtime. The two unbeaten boxers combined for 1,670 punches, but in the end with two of the three judges favoring Frampton’s accuracy and edge in power punching over Santa Cruz’ windmill-like workrate. They will have the chance to do it all again in late January; if it’s even half as good as the first time around, fans will have been given their money’s worth.

Francisco Vargas D12 Orlando Salido (6/4/2016, StubHub Center, Carson, Calif.): Any bout that EXCEEDS ridiculously high expectations going in is an automatic contender for Fight of the Year. There was no less than an eight-week stretch where this one was the clubhouse leader, and one that stood the test of time in the collective eyes of several respectable outlets that honored the slugfest from the s its Fight of the Year. Vargas won his super featherweight title by surviving a knockdown and a grotesquely cut and swollen eye in dropping and stopping Takashi Miura in the 9th round of 2015’s Fight of the Year. He needed all seven months of rest to prepare for 12 rounds of hell from Salido – who by now has become a regular entrant in the Fight of the Year category. The two never stopped punching, leaving fans and viewers on their feet and the judges split as the night ended in a stalemate.

Jamie Conlan KO8 Anthony Nelson (4/30/2016, Copper Box Arena, London, England): By the end of the first round, Nelson had already been sent to the canvas while Conlan suffered a cut just outside his left eye. Drama already present three minutes into their super flyweight bout, but with plenty more to come. Conlan – an unbeaten 30-year old from Belfast and aptly nicknamed ‘The Mexican’ – was forced to survive two knockdowns and a hailstorm of punches to finally put away Nelson for good courtesy of a left hook body in the 8th round.

Roman Gonzalez UD12 Carlos Cuadras (9/10/2016, The Forum. Inglewood, Calif.): Gonzalez had stormed through three weight classes, winning titles at strawweight, junior flyweight and flyweight with only an occasional test along the way in emerging as the sport’s top pound-for-pound boxer in the world. It’s only fitting that his pursuit of a championship in a fourth weight class came with a Fight of the Year-level test from Cuadras, the unbeaten super flyweight titlist who in suffering his first defeat refused to go down without a fight. The free-swinging puncher from Mexico managed to land enough shots to produce significant facial damage to Gonzalez, but not enough to prevent his counterpart from becoming Nicaragua’s first-ever four-division champion, doing so in the honor of the late, great Alexis Arguello.

Dillian Whyte SD12 Dereck Chisora (12/10/2016, Manchester Arena, Manchester, England): A long-standing grudge match that both boxers were practically dared into taking turned into the talk of the town on perhaps the busiest boxing night of 2016. Even in the presence of the more celebrated unbeaten heavyweight titlist Anthony Joshua - whom stopped Whyte in seven rounds exactly 52 weeks prior - this 12-round heavyweight war easily stole the show. It was Chisora at the best he's been in years, but the brash Brit came up just short versus the resurgent Whyte, who now enters 2017 with visions of a mandatory title shot versus Deontay Wilder thanks to his career-best feat.

Yunier Dorticos KO10 Youri Kalenga (5/20/2016, Palais des Sports Porte de Versailles, Paris, France): In a long overdue breakout year for the cruiserweight division, this savage punchathon was the very best of the lot in terms of pure in-ring violence. It mattered little to either fighter - at least once the opening bell sounded - that the contest was downgraded from a WBA "Regular" to "Interim" title fight. Kalenga was floored in round two, but the Congo-born, France-based cruiserweight stormed back in the middle rounds in forcing Dorticos to work every second of his first-ever bout outside of the United States. The Miami-based Cuban was docked one point for rabbit punching in round eight and trailing on two of the three scorecards heading into the championship round, but he took it out of the judges hands with a non-stop flurry in round ten that ended with a final right hand crashing down on the mug of a defenseless Kalenga to close the show in their interim title fight.

Keith Thurman UD12 Shawn Porter (6/25/2016, Barclays Center, Brooklyn NY): Talk about a fight being well worth the wait. Discussed since last September, originally slated for the first quarter of 2016, the two welterweights disallowed ring rust or the threat of defeat from performing at the highest level of skill and action over their course of their 12-round championship bout. Thurman managed to preserve his "0" but having to sweat out the scariest moments of his career as Porter came oh-so-close to becoming a two-time welterweight titlist. Instead, it was "One Time" who prevailed in prime time, with the CBS-televised main event drawing rave reviews and favorable overnight ratings in the network's first prime-time boxing telecast since 1978 when Leon Spinks shocked the world with a 15-round win in his first fight with the late, great Muhammad Ali.

Jason Sosa UD12 Stephen Smith (11/12/2016, Salle des Étoiles, Monte Carlo, Monaco): What began as a routine super featherweight title instead became the latest form of proof in exhibiting just how miserable was HBO's 2016 boxing season. The network could have boasted three entries on this list, but instead passed on this bout in favor of a painstakingly dull 12-round waltz between unbeaten heavyweight Luis Ortiz and the monotonous Malik Scott. Sky Sports viewers (along with "radio listeners") were able to take in the terrific 12 rounds of action that followed the heavyweight heap, with Sosa forced to settle for his first decision win in more than four years but well worth going the full distance in outlasting a game Smith, who came up a bit short in his second bid at joining brother Liam as the championship members of his fighting family (also including Paul and Callum).

Yoshihiro Kamegai D10 Jesus Soto Karass (4/10/2016, Belasco Theatre, Los Angeles, Calif.): This clubfight came with a built-in cult following, with many among the Boxing Twitter universe outright demanding the matchup months before it came to fruition. The fine folks at Golden Boy Promotions responded to the call, and the two boxers took care of the rest. Skill level was non-existent, but this night was all about two past-prime warriors looking for one more day in the sun in their Estrella TV-aired main event. Ten blood-soaked rounds later, their night ended in a stalemate and producing the chance to do it all again, this time live in front of an HBO-televised audience with Kamegai battering Soto Karass into retirement.