They say the best boxers are liars. For years, academics and students of the sport have pointed out how, to take it to the top of this rough old business, you need to be a master of deception. You must be able to disguise punches, mask pain, trick a foe using your eyes, feint until they no longer know what to believe and punch at 75 percent until a window opens and then, when an opponent is oblivious to it, fire off a missile at 100 percent to turn out some unsuspecting lights.

You need to be able to dance convincingly one way, only to start moving the other, control your breathing when you’re actually panicking or panting and tell the referee you’re absolutely fine when you’d rather be on the beach with a cocktail. When the blood is covering your face, your chest and lungs are on fire through exhaustion and your legs are covered in cement, you look coldly into an official’s eye and smile, “I’m fine.”

Yet it’s not just fighters who can be deceptive, it’s appearances, too, certainly in the ring.

Boxing aficionados know all too well that muscles don’t make a fighter, that you can’t put muscles on a chin and that the size of one’s biceps don’t make a jot of difference when it comes to punch power.

We have seen it time and again.

In the recent past, some will look at how the comparatively diminutive Joe Calzaghe was able to outmanoeuvre and outman the man dubbed the next Mike Tyson, Jeff Lacy. Earlier this year, Andy Ruiz – he of Snickers fame – outlasted the supremely hulk-like Anthony Joshua. And the Adonis that was Frank Bruno struggled with some comparatively doughy heavyweights.

Because for however fit you might be behind closed doors, nothing prepares you to fight, not really. There’s no exercise in the world that stokes fear, shocks the nerves or pools the adrenaline the way fighting does. 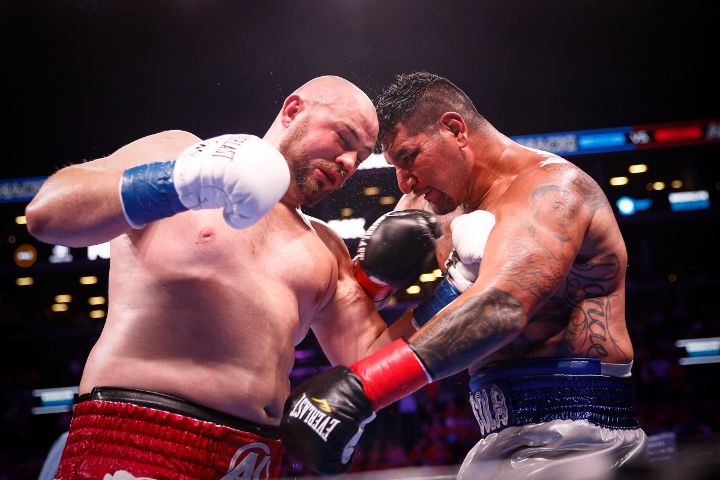 You can have the world’s greatest specimen doing laps of an athletics track but put him in the ring with a fighter who knows his way around and he will be gasping on red hot lungs and, minutes later, trying not to vomit.

Two physiques lied to us on Saturday night, in the Barclays Center, as Adam Kownacki and Chris Arreola – who’s been the brunt of a decade of fat jibes – not only beat the heavyweight CompuBox record, they obliterated it by so much it was as if they’d started a new sport.

The previous record was held in the dramatic attractional battle between Ike Ibeabuchi and David Tua back in 1997.

CompuBox had them trading 1,730 more than two decades ago. These two fleshy giants hurled 2,172 blows. They simply didn’t stop in a wild and woolly brawl that had it all bar either fighter having the ability to seriously hurt the other.

But the type of fitness levels you can build behind closed doors matter little if you don’t know the ropes.

These guys know the ropes.

They might not have a 20-minute 5k run, be able to deadlift 500lbs or have an unbroken set of 20 pull ups, but they can do what’s required. They can go rounds. They can steal breathers. They can use their minute’s respite between rounds and come again. They can fight in spurts, stay calm in a crisis and do something that someone who is simply extraordinarily fit can never do.

Part of that is the mental game, not to be straddled by fear, suffocated by nerves and hyperventilating with panic, but a lot of it comes from experiences and just, basically, being a fighting man.

When Tyson Fury started his long road back to fitness he had to walk on some of the runs, but he could always go rounds. He could spar, he could work the pads…

Kevin Johnson is another example; he can do 12 rounds in his sleep. Sure, they might be increasingly lacklustre as his career winds down, but that’s so, so hard. It’s phenomenal and commands respect.

Kownacki and Arreola were busy and industrious, but there was no shortage of skill, there were tidy combinations, neat inside work and a wonderful fighting rhythm.

Sure, there were some strategic flaws but they had accepted one another’s limitations early on and decided they were going to do what they were going to do, Kownacki trying to break out and become a name in the division against self-confessed gatekeeper Arreola, himself fighting for one last payday or the opportunity to leave the sport with nothing left to offer, something that’s often been said he had not done enough.

Last night made up for several of the false starts and the false dawns. He emptied his tank. He didn’t fold when he hurt his left hand half way through the fight. He didn’t slow. He didn’t stop churning forwards, taking shots to land his own.

He left with his heart bursting, pride intact. Maybe as far as his career was concerned it was too little too late in that respect, but maybe it was the kind of performance that has given him closure; knowing he did all he could, leaving everything he had, and it still, ultimately, it was not quite enough.

Astonishingly, it was the first time Kownacki had done the full 12 and he paid tribute to the “Aztec Warrior” opposite him afterwards. “Mexican’s are great fighters,” he said.

For 38-year-old Arreola, well, he will talk to his family and discuss whether he wants to go on.

“I am blessed to have been a boxer,” he said.

We, too, are blessed.

Through the last couple of hard weeks boxing has endured, with talk of death and drugs on loop, it’s nights like this when you believe in the sport again. It was the kind of fight where you don’t have to lie to yourself about loving a sport that is far more flawed than the men it all too often fails.

you are always a good writer

[QUOTE=Scopedog;19963222]Very good article. I liked the opening segue about how traditional kinds of fitness often don't avail you for much in the ring. One of my favourite stories one of the trainers at the gym back home in the UK…