The initial impact of COVID-19 was most visible on a national scale in the world of sports. The National Basketball Association, Major League Baseball, and other time-honored institutions shut down. Boxing followed suit.

Now sports are in the early stages of return. Initially, most competition will take place without spectators onsite. The powers that be will rely on television license fees to make ends meet. But inevitably, spectators will be invited back into the fold.

Will boxing fans return to arenas? At the moment, the question is academic. But there will be significant practical implications before long.

It's one thing to get fans to turn on their televisions sets or other devices to watch a fight. It will be a more formidable task to get them back to ringside.

Boxing at its best is the greatest sport of all. But there are times when buying tickets for a fight feels like a bad habit.

No sport disrespects its onsite fans as badly as boxing. Ticket prices are high. There are long periods of inactivity between undercard fights, which are usually mediocre. Bad decisions frustrate fans, who want to see fair fights as well as good ones. Now COVID-19 has further complicated the issue.

Donald Trump would like to see fans return to sports events across the board. “We want to get it back to where it was," the president said in an interview that aired during a May 17 golf telecast on NBC. "We want big, big stadiums loaded with people. We want to get back to normal where you have the big crowds and they’re practically standing on top of each other and enjoying themselves, not where they’re worried. Things can happen very quickly. We’re getting it back and it’s going to be fast.”

But it won't be that easy. 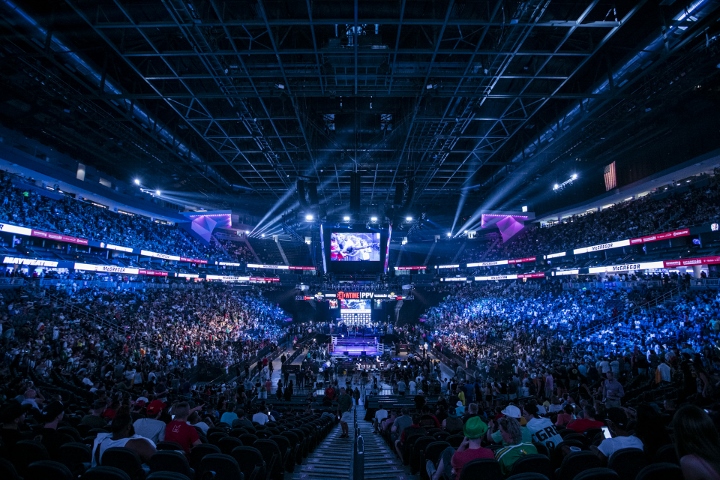 Relatively few people have gone through the past three months thinking that, once the pandemic has passed, their lives will be better than they were before COVID-19 hit. They're worrying about getting their heads back above water. In a time of mass unemployment and failing businesses, discretionary income goes down. Some states might consider professional sports to be an "essential business" that should be reopened to spectators as soon as possible. But boxing fans might not consider it essential to go to fights.

Unlike team sports, boxing doesn't have the narrative of a season culminating in championship playoffs to attract attention. There are no season ticket packages to lure fans in. And lengthy travel is often required to get to a fight.

That leads to perhaps the biggest obstacle that all sports including boxing will face in bringing fans back to arenas - the health issues involved.

Some sports fans will discount health issues, just as some people discount the need for safe sex. It depends on how, and how badly, someone wants something. But realistically speaking, many sports fans won't return to arenas until there's an effective vaccine to combat COVID-19.

Promoters favor the notion that fighters must accept smaller purses. They're less enthusiastic about paycuts where their own bank accounts are concerned. Fans might decide that their own safety is more important to them than the checking accounts of promoters, managers, and fighters.

A few major promoters might finance a few big fights with large site fees from the Middle East, Macau, or some other foreign entity. That seems to be the formula in bigtime boxing these days: solicit funds from a network or other source outside of the sport with the fights that follow failing to generate enough revenue to cover the investment.

ESPN, FOX, and DAZN have invested hundreds of millions of dollars in boxing over the past two years. Has it worked? Right now, the prospect of a 54-year-old former fighter who lost three of his last four fights and hasn't fought in fifteen years facing off in an exhibition against a 57-year-old former fighter who hasn't fought since 2011 is generating more interest than anything currently on the boxing calendar.

Boxing has to reset. It hasn't satisfied its fans for a long time. That's a longterm project. But a journey of a thousand miles begins with a single step.

Sports are addictive for their fan base. It's hard to shake an addiction, but it can be done. The more time goes by, the more fans will adapt to life without sports and say, "I can live without attending a fight." In that regard, some thoughts that I received recently from a reader are instructive.

"Since the pandemic hit the sports world," the email read, "I have noticed the obsessive value that is put on sports in this county. How if people could not watch live sports, well, they were going to talk about sports. And if there were no sports to talk about, then they were going to reminisce about the old days. That thirst for sports is still there, right? Well, not so fast. There is a natural progression to some things in life. Sorta like losing a girlfriend. At first, it is painful. It hurts just not to hear the phone ring. But after a while, you find out some things. You find out that there were parts of that girl's persona you do not miss. Was she really all that much? And before you know it, bam! You see a nice swinging skirt pass by and you are over her. The promoters do not want to you to find out you can possibly live without sports. And the truth is that sports in their current form can be done without."