Boxeo Telemundo Returns To Its Roots For Season Premiere

The 31st year of 'Boxeo Telemundo' will look a lot like its series debut.

The long-running boxing series returns to its roots for its 2020 season premiere, with the show to air live from Miccosukee Resort & Gaming in Miami, Florida (Friday, Telemundo, 11:35pm ET).  The famed venue returns to the fold for the first time in nearly 10 years, with Friday's show topped by the junior flyweight debut of Caguas, PR's Jonathan 'Bomba' Gonzalez (23-3-1, 13KOs) versus Mexico City's Saul 'Baby' Juarez (25-10-2, 13KOs) in a 10-round regional title fight. 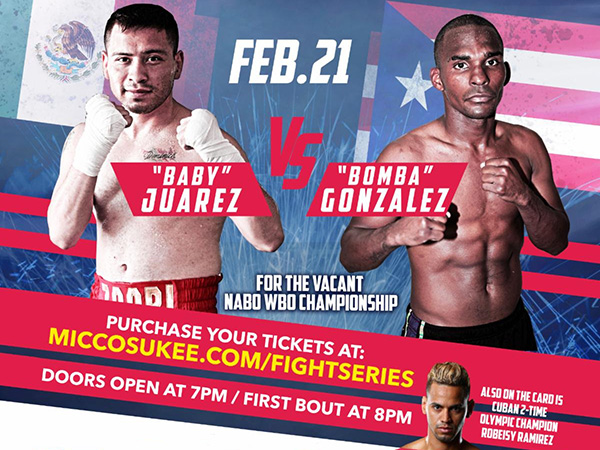 “There can’t be a better place than this one,” Felix ‘Tutico’ Zabala Jr., president of All Star Boxing told BoxingScene.com of the series returning to where it all began in 1989. “I live seven miles away, and Telemundo is only a couple of miles away from Miccosukee. It’s win-win for everyone involved. We had so many great shows here in the past so it means a lot to be able to bring back this series.”

The makeshift Miccosukee Dome served as a circuit favorite for more than 20 years before hosting its last Telemundo card in October 2010, with the series eventually moving primarily to Central Florida and Mexico City. The venue is now back in the mix and likely to host at least three Telemundo events this year.

With a return to familiar grounds comes a main event with familiar faces, both looking for in-ring redemption.

Gonzalez fights for the first time since a 7th round knockout loss to three-division titlist Kosei Tanaka last August in Nagoya, Japan. The bout was far more competitive than the lopsided odds suggested, as Gonzalez dropped Tanaka in round four and was up on two of the three scorecards through six rounds before suffering three knockdowns in the fateful 7th round.

Tanaka made one more defense at the weight before abandoning his reign to move up in weight. Meanwhile, Gonzalez heads in the opposite direction as he takes his 5'2" frame down to junior flyweight.

"It's an honor to be back on this series and I'm excited to be fighting in a new weight division, a weight I should have been fighting at all this time," Gonzalez told BoxingScene.com. "I can't wait to fight for this WBO (regional) title and then hopefully another shot at a world title in 2020."

Juarez looks to bounce back from a points loss to countryman Ganigan Lopez last November. The well-traveled former two-time title challenger surprisingly fights for the first time in the United States, having previously fought in six other countries.

Also on the show: Dominican knockout artist Elvis Rodriguez(5-0, 5KOs) —who is trained by Freddie Roach—will face Louisiana's Kaylyn Alfred (4-2) in a six-round junior welterweight clash; and Kissimmee's Antonio Vargas—a member of the 2016 U.S. Olympic boxing team—makes his eighth Telemundo appearance as he squares off versus Nicaragua's Juan Centeño (4-4, 1KO).

"Kissimmee's Antonio Vargas—a member of the 2016 U.S. Olympic boxing team—makes his eights Telemundo appearance as he squares off versus Nicaragua's Juan Centeño (4-4, 1KO)". Vargas with another tomato can

Back in the day I watched dozens of fights on [B]Boxing Desde Mexico[/B]. Back when you had to GET OFF YOUR COUCH TO CHANGE THE CHANNEL. Yeah, back in the Paleozoic.