SES will begin the new season on September 15 in Magdeburg with heavyweight Tom Schwarz (21-0) and light heavyweight Adam Deines (15-0-1) headlining. The show goes ahead at the historic Stadthalle (Town Hall) which hasen´t had a boxing event since 1935.

According to the EBU, SES then returns to Leipzig October 27 with a big show topped by Dominic Boesel´s defence of the EBU 175 lb title against stable Enrico Koelling - this one was set for June 9 but Boesel got injured in training. In the co-feature EBU super middleweight ruler Robin Krasniqi makes a voluntary defence of the title against an opponent to be announced.

There could be a third headliner as EBU heavyweight title-holder Agit Kabayel is booked to fight on this date as well. 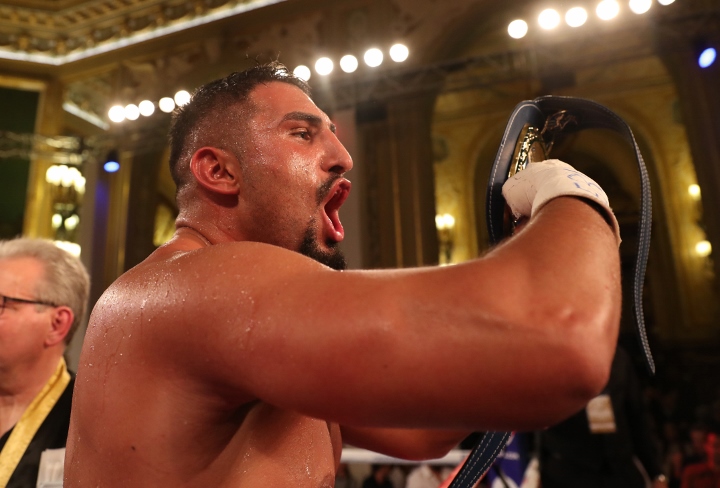 Spaniard Ronny Landaeta (15-0) takes on Cesar Nunez (15-0) on September 22 in Malaga with the vacant EU super middleweight title at stake.

Landaeta was first set to fight for the title on August 22 and for a while he even had Juergen Braehmer as the opponent - but after Braehmer pulled out the show was moved to September 22.
...

Zakaria Attou´s defence of the EBU super welterweight title against unbeaten Sergio Garcia (27-0) goes ahead on August 4 in Poissy (France). Attou, 27-6-1, was 5-4-1 in his two years as a pro but is 6-0-1 in the last two and that includes wins over Orlando Fiordigiglio and Maxime Beaussire.

Dave Garside says James Jazza Dickens needs to fight with a boxing glove on his head, ahead of the Liverpudlian’s rematch with Martin Ward at the Rainton Meadows Arena on July 27.

County Durham’s Ward faces Dickens, 23-3 (8), for the British Super Bantamweight Title live on Freesports (Freeview 95, Freesat 252, Sky 422, BT 95, Talk Talk 95), and the war of words between the southpaws’ camps is heating up ahead of the highly-anticipated clash.

Martin, 26-4-1 (5), and Jazza originally squared off in 2015 for the same title, with Dickens edging a close encounter via a split decision verdict.  That contest was a bloody affair, with Martin having to veer from his game plan after suffering serious lacerations from head clashes.

[QUOTE=joe strong;18921375]Put them on the same card fighting for the EU belt. Both in The top 15 in a couple bodies. Christian Hammer would be a good opponent for either guy. Schwarz is another Dimitrenko. At least Sasha beat some…

[QUOTE=BigZ44;18921344]Hopefully Schwarz and Kabayel get solid opponents[/QUOTE] Put them on the same card fighting for the EU belt. Both in The top 15 in a couple bodies. Christian Hammer would be a good opponent for either guy. Schwarz is another…