BKFC Prez To Boxers: "If You Want To Make The Money You Deserve, Come To Bareknuckle"

While pro boxing has adapted to the times in many respects, creating COVID-free bubbles and running shows in studios and empty venues all over the world, many fighters are still left unemployed, or at best, underemployed.

Boxing’s big budget promoters have the resources to run network television shows, and those with shallower pockets have adapted to online streaming technology as well. But that isn’t a reality for everyone in the sport, and although the amount of boxing being broadcast may feel the same to the common fan, there are still far fewer shows being run globally than there have been in a very long time. The shows that have fallen off the calendar have been the club shows, the small hall cards where less experienced and decorated fighters would normally be able to find work.

One entity that has continued to run throughout 2020 has been Bare Knuckle Fighting Championship (BKFC), and it has notably been scooping up pro boxers who might not otherwise be getting any fights—or any fights they would want to take, anyway. 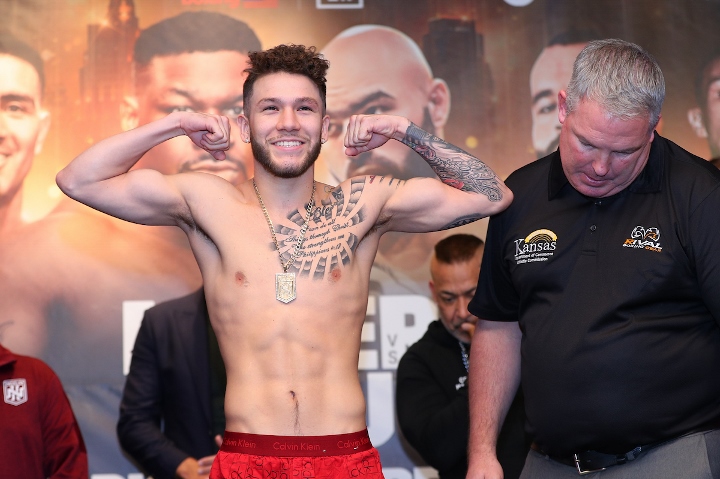 BKFC will host an event on Friday night, BKFC 14, from the Intercontinental in Miami, Florida, one of sixteen formally sanctioned events that have happened under its umbrella. The event will air on the BKTV app and website, as well as FITE via pay-per-view.

Among its participants, the event will feature eight fighters with professional boxing experience.

The card represents an increasing pattern of pro boxers, particularly club-level fighters or those early in their careers, taking the gloves off and stepping in the bareknuckle ring. For some it might represent a wholesale change of careers, but for most, it’s simply an additional discipline in their fighting career.

“It kinda makes sense, because the first couple shows we used mostly MMA fighters, and that's why I think we were able to bring over the MMA audience. Now that we're starting to use more boxers, we're starting to see some of the boxing audience come over,” said BKFC president David Feldman. “I would say in the beginning we were like 95-5, now we're like 70-30. Once we get to 50-50, that's when we know we're doing something special.”

The company’s most recent major event, BKFC 13, was headlined by Olympic bronze medalist Nico Hernandez, who is still very much an active, prominent—and undefeated—pro boxer. But Hernandez still represents something of an outlier in terms of the types of boxers the sport is attracting. More recognizable names like Hernandez and Paulie Malignaggi, who helped boost the company’s profile in a bout against Artem Lobov, are in the minority compared to less experienced and accomplished fighters who have come to BKFC and found greater exposure and opportunity.

On Hernandez’s undercard, his fellow Kansan Antonio Louis Hernandez turned in one of the more exciting performances of the night in a five-round decision win over Jack Frerichs. Hernandez is a 2-11-1 pro boxer who has been used as an opponent most recently against hot prospect Lorenzo Simpson. To this point in his career, only twice has he been matched with a fighter who even has one loss on his record. With his lopsided record, it is sadly unlikely any promoter would spend the money to put him in a pro boxing match that he wasn’t expected to lose. Moreover, a boxer with that type of record would often not be deemed suitable for American television, and would find themselves fighting off-TV in the dark.

“We pay better than most boxing and MMA promotions, unless you get to the high high level, we don't have the kind of spend to pay the big big names,” said Feldman. “For our prelim into our main card fighters, every one of those fighters are making more than they would at the same level in the other two sports.”

Financial compensation aside, in BKFC, due to its shallower talent pool and roster, he was given a chance in a 50-50 fight, and came out on top in a fight aired on internet pay-per-view.

“In a larger boxing promotion, you have to be kind of well-known to advance. I've promoted plenty of boxing shows and plenty of MMA shows in which I could make a fight and say this guy is going to win with 99% certainty. In bare-knuckle I can't do that,” said Feldman. “When you get a guy like Hernandez who comes in with a very upside-down record, and he comes in and I match him up evenly, he has a great fight and actually gets the nod in that fight.”

On Thursday, the BKFC 14 co-feature bout between former 130-pound contender Dat Nguyen and Reggie Barnett Jr., which was to be for an interim BKFC title, fell through, but is expected to be rescheduled. Nguyen represents another class of fighters that have started to find the bareknuckle realm appealing. Those whose careers have stalled out, and for whom the financial compensation they believe they deserve based on their experience and achievements is not being offered to them in pro boxing at the moment.

After a FS1-televised 2017 win over Miguel Flores, who was 22-0 at the time, Nguyen says he never got another call for a significant fight. He has not fought since in pro boxing, while Flores went on to face Leo Santa Cruz for a world title not long after their bout.

“Dat moves over to bareknuckle, now everybody knows him. His followers have tripled. We have 250-300 bare knuckle fighters fighting in the world. In boxing and MMA, there's 100,000 fighters. So where do you have a chance to stick out faster and get bigger quicker? In our sport, because we don't have as many fighters. It's simple math,” said Feldman. “I do think that if Dat wins this championship, it's going to bring a lot more boxers to the table.”

Nguyen’s rapid success may very well have motivated two of BKFC’s other boxing acquisitions to make the leap. On Friday, Cuban-born light heavyweight Ulysses Diaz, who is 12-1 as a pro boxer, will fight sans gloves for the second time, and former world champion DeMarcus “Chop Chop” Corley, who actually drove from Las Vegas to Kansas to participate in an open BKFC tryout, awaits his starting date as well.

“If you want to make the kind of money that you deserve to make, and you're willing to come in and fight your ass off, and you want to make better money and get better notoriety, then you have to fight bare knuckle,” boasted Feldman. “If you don't mind getting cut, and you're willing to fight your ass off and get paid what your worth, let us blow you up and make you a star.”

There's less interest in the Bogus Kentucky Fried Chicken (BKFC) league than both MMA and boxing. How is he planning on paying pro boxers more than they are getting on cards with more viewership and promotional power? He's just blowing…

Come get your teeth knocked out for a generous $15K...sounds like a plan.

Calling out the female commentator “you’re [I]f[/I]uckin next” and so she steps into the ring for a face off. Women’s boxing can really learn a thing or two from these gals.

One thing I really like about BKFC is you see female stoppages. They don’t slow the card down with their boring decisions. And the women tend to be hotter than in boxing.