LAS VEGAS – Dmitry Bivol doesn’t have a gut feeling regarding whether Sergey Kovalev will box again.

Whatever Kovalev decides to do, Bivol believes Kovalev has firmly established his legacy among boxing fans in his native Russia. Bivol, a Russian citizen who was born in Kyrgyzstan, commended Kovalev for his performance against Canelo Alvarez and for what the three-time light heavyweight champion accomplished in his 10-year pro career.

“I don’t know what he will do,” Bivol, the WBA light heavyweight champion, told BoxingScene.com. “But he’s still the champion for Russian people, because he achieved a lot. All people respect him. He showed us a lot of good, great fights. Maybe – he has a family, yeah? He earned enough money. Maybe it’s good, better way to enjoy the family now. But boxing, it’s like a drug.” 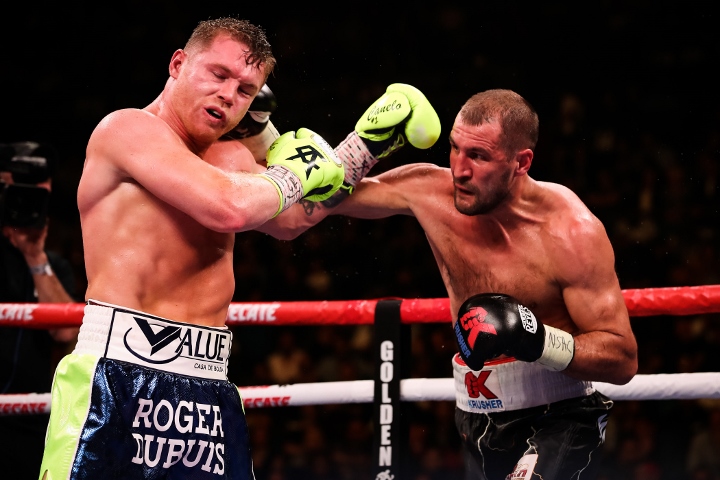 The 36-year-old Kovalev (34-4-1, 29 KOs) has lost by knockout or technical knockout three times since June 2017 and, at the very least, will take an extended break from boxing. The former WBO light heavyweight champion fought three times within a nine-month span this year.

Eleven weeks before Alvarez knocked him unconscious in the 11th round Saturday night at MGM Grand Garden Arena, he won what turned into a physically grueling fight against Anthony Yarde (18-1, 17 KOs) by 11th-round knockout August 24 in Chelyabinsk, Russia.

Kovalev acknowledged after losing to Alvarez that the quick turnaround between his victory over England’s Yarde and the start of training camp for his showdown with Alvarez adversely affected him. He went to a local hospital after Alvarez (53-1-2, 36 KOs) knocked him out Saturday night, but he checked out fine.

Kovalev is contractually committed to DAZN for two more fights as part of his deal for the Alvarez fight, which paid his side $12.5 million. The second of those two fights for Kovalev could come against the 28-year-old Bivol (17-0, 11 KOs), who wants to fight Alvarez next, either in a light heavyweight title unification fight or at the super middleweight limit of 168 pounds.

“Politically, we have the least problems in fighting any of these guys,” Vadim Kornilov, Bivol’s manager, told BoxingScene.com. “So, I don’t see a problem making any of the fights.”

Kovalev's best win was a washed up Bernard Hopkins. He lost to fighters he should've beat. Why should he go to the hall?

He is going to the hall. 3 time champ, only lost to the best, beat Ward the first time according to most observers, very competitive in all his loses. Better career and better boxer than Golovkin. Best LHW champ of…

[QUOTE=Boxfan83;20172039]Orlando Salido had a lot of love by Mexicans and that dude had like 12 losses. Marquez retired with 7 losses. Morales had 9 losses. Barrera had 7. All beloved.[/QUOTE] Good point. Ali, Foreman, Ray Leonard, Ray Robinson, Gatti, Pacquiao,…

[QUOTE=whatismyname;20172017]Thats boxing fans in general no?[/QUOTE] Real boxing fans do not expect perfection. They understand that in all sports there are good days and bad days and that skills decline with age. Casuals are another matter. They are quick to…

Wow....what a stellar role model for the Russians....