Bivol: If Canelo Faced Kovalev of 4 Years Ago - It's A Different Fight

Fatigue was the big factor in Saturday's fight between Sergey Kovalev and Saul "Canelo" Alvarez.

Canelo moved up in weight by two full divisions and scored an eleventh round knockout over Kovalev to capture the WBO light heavyweight title at the MGM Grand in Las Vegas.

After the fight, Kovalev admitted that he was tired after the conclusion of the sixth round. 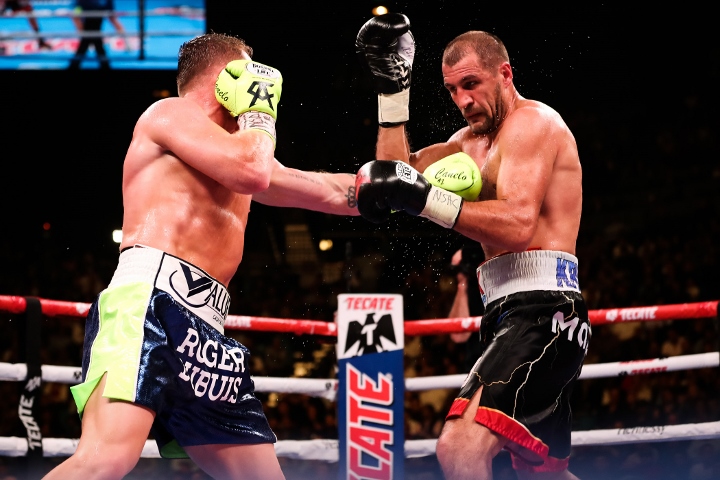 At 36-years-old, Kovalev was unable to keep up a very active pace against the much younger man.

He felt Kovalev was no longer the same fighter of years back.

“If Kovalev would have met the same Alvarez four years ago - everything could have been different. Now it was clear that Sergey was fatigued. He boxed not that long ago, and he's not the same as he was years ago,” Bivol said to tass.

Bivol's co-promoter, Andrei Ryabinsky of World of Boxing, was proud of Kovalev's performance.

"Everyone saw the fight, Canelo boxed very well, Sergey lost, but I still think that Sergey is an excellent boxer and one of the best in the world,” Ryabinsky said.

“It was just that Canelo in this case was stronger and there were a lot of things [in his favor], right from the start of the fight. It's not a coincidence, they are both awesome boxers, but Canelo is now one of the best regardless of the weight category. And to lose to such an opponent is nothing to be ashamed of."

Obviously, Canelo would have gotten a beating

This was a great opportunity for Canelo, he chose Kovalev because the Russian was/is in the "twilight" of his career. Kovalev's battled mileage body was quite noticeable, and at 36, his best days were gone. This is Boxing, and it…

If Kovalev would have met the same Alvarez four years ago..... If frogs had wings.....

Matchmaking 101, fight stylistically disadvantaged & names on the way out. Occasionally fight a bigger guy with a serious handicap and proclaim to be #1. Wash, rinse repeat.

Of course we all know that! But also you must understand iron head that Canelo 4 years ago was fighting at 154! This is the most stupidest comment I have seen so far.