Billy Joe Saunders: I Can Beat Callum Smith, Anyone Else at 168!

Billy Joe Saunders has insisted that he has the beating of Callum Smith.

The WBO super-middleweight world champion signed a new promotional deal earlier this week, with Eddie Hearn and Matchroom Boxing, after severing his ties with Frank Warren and ending a long-time working relationship.

Saunders, 29, previously held the WBO middleweight title from 2015 to 2018 and when he was asked about facing the Liverpudlian in a unification showdown up at 168lbs, the Hatfield ace –– whose last outing was against Shefat Isufi at the Lamex Stadium in Stevenage –– said that he has the beating of the consensus division number one.

“I think Callum is a brilliant fighter,” said Saunders, who has a record of 28-0 with 13 quick finishes since turning professional. “He’s done very, very well in his career, he’s a good puncher, a good boxer, he’s got all the attributes you need to be a world champion, but if you put me in the ring with someone who is of the same level as me or a level above and I’ll rise. That’s the reason why I want these big fights –– it’s sink or swim –– to see whether I can raise my game to where I think I can because if I can then I know I’ve got the beating of all of them.” 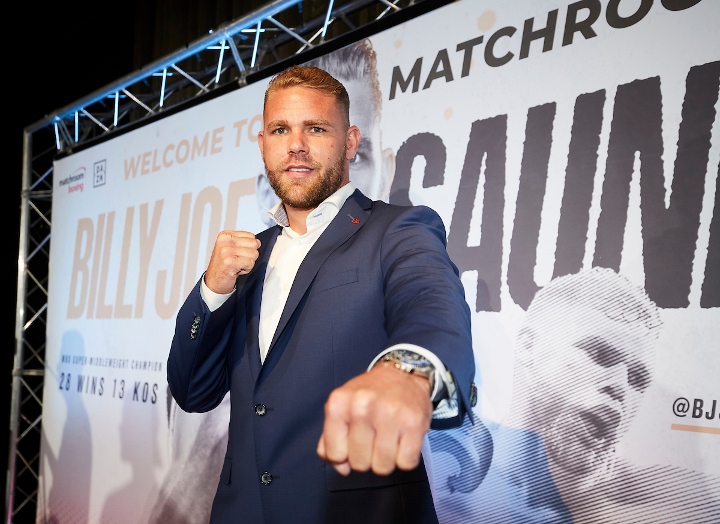 Smith claimed the status as the best in the world at the weight when he dethroned George Groves last September, knocking him out inside seven rounds at the King Abdullah Sports City Stadium in Jeddah, Saudi Arabia to win the World Boxing Super Series tournament and, at the same time, pick up the WBA Super title and Ring Magazine belts to add to his WBC Diamond bauble.

“People look at Callum and he would be favourite going into the fight [against me], he’s a great fighter and I’ve got a lot of respect for him and his family, but I genuinely believe I’ve got the beating of Callum Smith and any other super-middleweight in the division.”

Smith is understood to be gearing towards a return next month, while Saunders’ next fight will be revealed next week.

He said: "This move is going to benefit me massively. Eddie Hearn and Matchroom Boxing can put me right out on the branch for those big fights.

“I'm on Golovkin and Canelo’s turf. I've made this move to make them fights because I’m sick of hearing their bulls**t excuses. Those fights make financial sense and they make sense because we’re on the same network.

Hearn, Saunders’ new promoter, has also had his say on the fights that can be made for his latest recruit.

"This is a huge signing for us and the perfect place for Billy to be,” he said. “Everyone in boxing knows how good Billy is and now he is going to get the chance to prove it against the elite. He holds a world title at 168lbs but can also make 160lbs comfortably and when you look at the fighters we work with across our platforms, this was an obvious link-up."

Nasal Spray Belt of the year on tbe line

Oh, he'll get the beating of him alright. Smith KTFO6 BJS.