The British Boxing Board of Control have moved swiftly and decisively by handing Billy Joe Saunders (26-0, 12 KOs) a £100,000 fine only a week after charging him with misconduct after a video surfaced in which he mocked a drug addict and tricked her into hitting a passer-by.

Saunders and his friends offered a woman “£150 of crack” in exchange for performing a sex act before starting that they had changed their mind and wanted her to hit a nearby man instead.  They falsely labelled the man as a “paedophile” as the 29-year-old WBO middleweight titlist tried to goad her into hitting him.

The woman hit the passer-by before apologising to the man when Saunders revealed it had all been a joke.  Despite issuing an apology, Saunders was ordered before the Board as well as being told that the local police could bring a number of charges against him, including the offer to supply Class A drugs, aiding and abetting an assault, assault and public order offences. 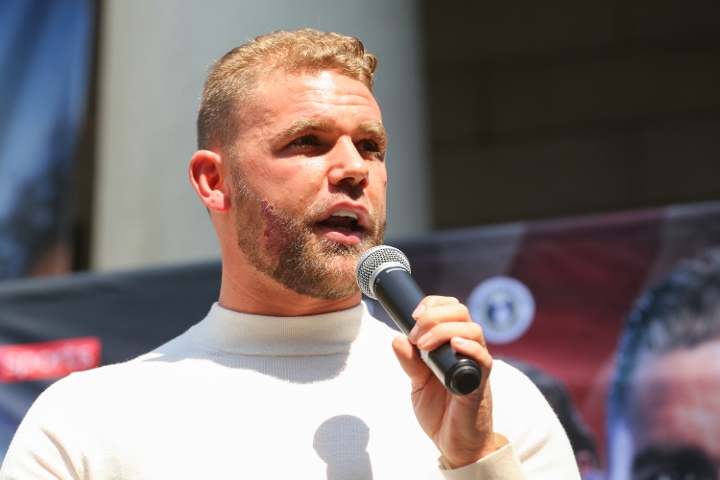 At a hearing earlier today, the Board ruled against Saunders and hit him with a hefty fine, stating: ‘Billy Joe Saunders appeared before the Stewards of the British Boxing Board of Control today under a misconduct charge following his recent behaviour shown on social media.

‘The Stewards have found Mr. Saunders guilty of bringing the sport of Boxing into disrepute and have fined him the sum of £100,000 and issued a severe reprimand as to his future conduct.  All monies will go to the BBBofC charity to assist ex-boxers and ex-license holders who have fallen on hard times.’

Saunders won his title via a points victory over Andy Lee in December 2015 and has since overcome Artur Akavov, Willie Monroe Jr. and David Lemieux, all decision wins.  He fights Demetrius Andrade in a mandatory defence in Boston on October 20 after Eddie Hearn of Matchroom won the right to stage the contest as part of his DAZN deal.

[QUOTE=Sid-Knee;19157258]You don't know that Saunders had signed up to fight Gennady TWICE do you? It Was Gennady who went instead and fought Canelo. which is fair enough because it was the bigger fight. So that wasn't Saunders fault. He was…

[QUOTE=Sweet_Science2;19152052]Got fined for being a dumb ass!! Mean he does dumb shyt. We will see how fast he fights Charlo when that fight becomes mando. He is a pussie end of story. Ducked fights, pulled out all that shyt.[/QUOTE] Saunders…

[QUOTE=Sweet_Science2;19152040]billy hoe ducked GGG as a champion said GGG would beat him. Was fighting scrubs. Pulls out of fights left and right. Based on that he would duck Charlo dude is pussie. It's all good Andrade should get rid of…

[QUOTE=Sid-Knee;19151590]Saunders got fined 100,000 by the BBBofC? And? What is the point you're trying to make? When could he face Charlo? There has never been a time he could face him you idiot. Lemieux and Andrade are mandatories, how many…

[QUOTE=Sid-Knee;19151586]Saunders didn't fail a test for anything illegal though. Not according to UKAD and WADA. I think they know a lot more than you. If you duck a fight you simpleton, you don't have a fight scheduled. That's the whole…