Billy Joe Saunders cruised through his WBO super middleweight title defence against Martin Murray at the SSE Arena, Wembley, winning a landslide unanimous points decision, while giving the impression he had plenty more to give.

At times, Saunders boxed brilliantly, making good angles and opening Murray up to uppercuts. But at times it was messy and at some points Saunders looked happy to fiddle his way through.  At 38, it was not prime Murray. He was game, but struggled to close the range and was often open to Saunders’s flurries.

Two judges, Steve Gray and Bob Williams, did not give Murray a round, scoring it 120-109. Marcus McDonnell gave Murray two, having it 118-110. It was not a performance to pit any fear into the division’s top lights, however.

“It’s like boxing in a cemetery,” Saunders said of boxing behind closed doors. “I like to perform for the crowd and get up for it. Tonight I tried to set a rhythm, but he is a cunning old fox and he knew how to tie you up well.

“It’s not a performance I am going to be shouting for people’s names about because I have been out a year. I probably needed the rounds going into next year. He got through it and fair play to him and I hop he has a good Christmas.

“The main thing is I am 30-0 and I guess I am getting luckier every fight. Let’s see if I can make a big fight, get up for it and put a shift in.

“It is very important to stay in the gym, I’m not getting any younger. I’ve just turned 31, I feel like I am in my prime. Tonight was strange because the stamina was there, but the timing was a little bit off. There was a bit of rng rust and everyone knows I need a rhythm for my boxing skills to come.

“Let’s get the big names out there. Obviously, Canelo and Smith are fighting. Andrade is out there. I need a big fight to get up for it.

“Any super-middleweight out there, let’s get it on. People can criticise me all they want but I am here to fight. It has to be a big fight.” 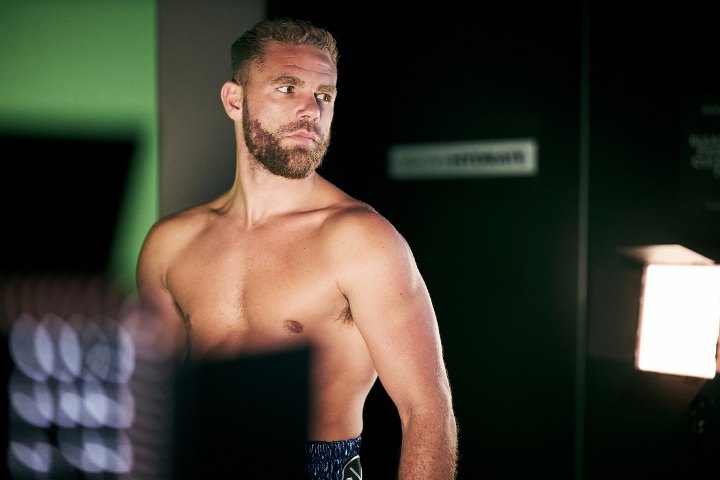 Saunders controlled the early stages, leading off as Murray looked content to ease his way into the fight. But the champion stepped things up in the third round, landing a cracking uppercut with either hand.

By the fourth round, Saunders was in total control, prodding that statuesque Murray with the jab and then opening up with one-twos. Near the end of the round, Murray was on the floor, having stumbled forward after shipping two hard lefts on the ropes, although referee Phil Edwards did not rule it a knockdown.

“It was definitely a knockdown,” Saunders said. “If that had been called a knockdown I would have adjusted and might have ot the finish is there were 30-40 seconds left. Maybe that could have changed the complete fight.”

At the end of the round, Jamie Moore, Murray’s trainer, was already warning him that he might pulling him out unless he started getting closer.

Murray did better in the fifth, closing the gap and trying to match Saunders punch for punch.

As the rounds wore on, the action got messier and the tempers were raised. Edwards twice warned the boxers to clean it up, while the pair talked to each other constantly and Saunders was warned for a blatant low blow in the eighth round.

In the ninth round, Saunders put his foot on the pedal, bullying Murray around the ring, but Mark Tibbs, Saunders’s trainer, implored him to take a round off in the tenth, as Saunders went back to simply boxing. After that, a stoppage never seemed likely as Murray seemed content to last the distance.

Eddie Hearn said it was up to Saunders to stay in training over Christmas, revealing that he had blown up in weight during the lockdown.

“When a fighter is in his prime we can’t waste the opportunity to find out how good he really is,” Hearn said. “We are not seeing it because he is not mixing with the elite of the elite – Golovkin, Canelo, Callum Smith, Demetrius Andrade.

It must be one of them next because otherwise we are wasting our time, he is wasting his career.

“People talk about Billy Joe Saunders as potentially best pound-for-pound fighter in Britain, but we can never call him that unless he is mixing with that level of opposition.”

Murray said he was likely to retire after the defeat.

"People have been wanting me to retire for years," he said. "I was going to retire two years ago, but I knew there was a big fight left in me, so I did it for the enjoyment.

"I've always had that bit of hope, I've always believed and I truly believed I could best him tonight. It had taken a lot of wear and tear on my body. I am ready for a good rest now."

[QUOTE=JakeTheBoxer;20929121]Saunders -Andrade please. they both claim others duck them, so..[/QUOTE] I suppose it makes sense for both guys, but, but what a dreadful borefest that fight has the potential to be. Forget putting people to sleep, that fight might actually…

Nothing was more predictable than this fight. BJS fighting a faded fighter. BJS wasting his career still.

Bjs has good natural talent & looked like a world beater year's ago against lemew. He belongs at 160 & in his personality he has wasted to many year's waiting for & i think still just wants that big cash…

[QUOTE=kiaba360;20928954]As much as that match-up needs to happen for both of them, IDK if I could stomach watching it. I didn't even watch BJS/Murray. I find BJS to be repelling, and his style doesn't mesh well with Andrade's at all.…

Saunders -Andrade please. they both claim others duck them, so..