Billy Joe Saunders has made his prediction on the heavyweight clash between Tyson Fury and Deontay Wilder this weekend – and he’s holding nothing back.

Fury faces the American on Saturday in just his third fight back since a 924-day exile from the sport and numerous well-publicised battles with drink and drugs. 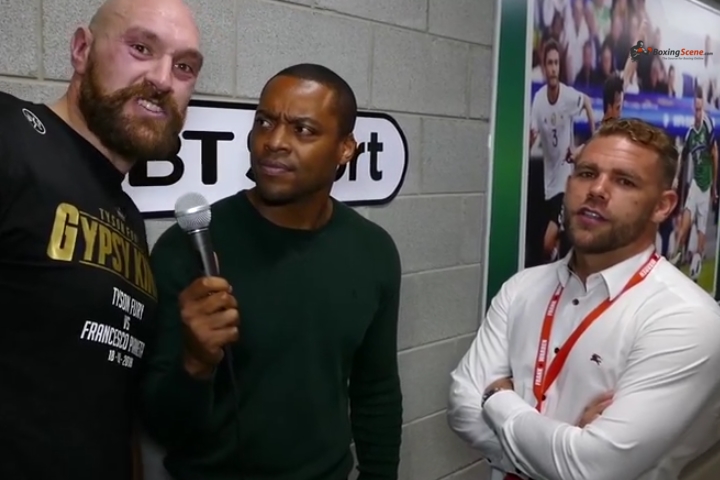 And ex-WBO middleweight king Saunders, who voluntarily relinquished his title in the wake of a controversial failed drugs test in the build-up to his ill-fated fight against Demetrius Andrade back in April, is backing his fellow traveller to dethrone the man with 40 wins and 39 knockouts.

Saunders has a betting slip in his hand with some hefty figures in his latest Instagram video.

And the Brit says: “Tyson Fury, ready to rock and roll.”

The former British, Commonwealth and European champion then shows another betting slip for the same odds but with £50,000. making a total bet of £70,000.

If ‘Gypsy King’ Fury wins, Saunders promised one of the staff members a drink.

Damn, seems like he is quite confident. Not a small bet... Doesn't Floyd also bet ridiculous amount even in some bit more obscure matches? Not just boxing but other sports too. I have a picture like that in my mind…

That settles it, I now want Wilder to win. I wasn't too fussed before as long as the fight doesn't turn out to be a snooze-fest, but watching that clowns face as he realized 70 grand has gone down the…

Big bet for someone who in the last few months has lost a GGG payday, a world title match payday, and his world title...

better off just giving that to charity

[QUOTE=Dr_Calvin;19304022]You bet $200k on Fury? actual cash dollars, not the worthless forum bets?[/QUOTE] Real money. Sports betting is legal in NJ. I'm a little concerned about the drugs, drinking and the layoff. If it weren't for that, I'd have bet…