And boxer has apologized for the second time in two weeks, for another joke gone wrong.

A video emerged on social media, which appeared to show Saunders teaching men how to hit their female partners if tensions erupt while on lockdown during the ongoing coronavirus pandemic. 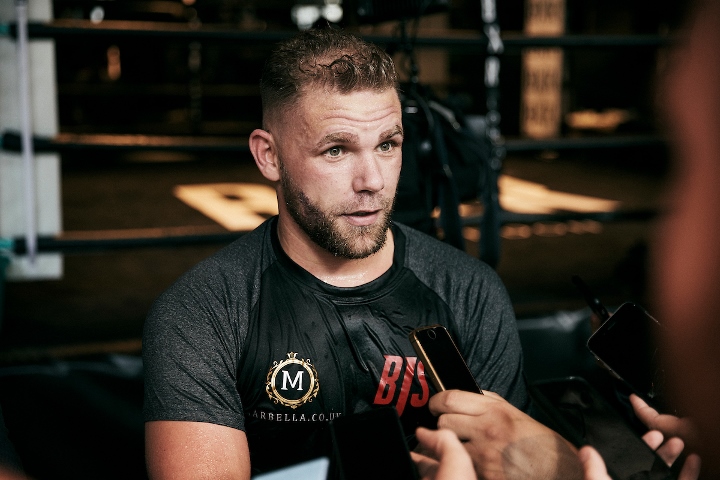 In the video, Saunders is hitting a punching bag in his barn, while explaining how to land the right shots on a female partner.

"I just want to make a little video for all you dads, husbands, if you've got girlfriends etc. Obviously this Covid-19 thing is getting quite serious and we are isolated in tight spaces," Saunders stated.

"If your old woman is giving you mouth and you try to be patient, you try to be calm, but after the seventh day or sixth you're about to explode. All of a sudden, she's coming at you, spitting a bit of venom in your face... I don't know what you've done but you've upset her.

"As she's coming in at you and you've lost it, just keep it safe with the hands. So as she comes in, she's just about to say something and you explode and hit her on the chin. At this time she may flash and see white... she's in a state of horror. All of a sudden you dip with that knee and finish her off, that should do the trick."

After some backlash began to trickle down, Saunders took to social media to apologize for the video.

"I would never condone domestic violence and if I saw a man touch a woman I would smash him to pieces myself. I have a Daughter and if a man laid a finger on her it would be end well. Apologies if I offended any women, stay blessed," Saunders stated.

Saunders is still in line to fight Mexican superstar Saul 'Canelo' Alvarez in a showdown in Las Vegas, but that contest may not come off if the planned date is pushed too far back into the summer. It was initially planned for May 2, and then postponed due to the pandemic.

[QUOTE=revelated;20486909]You miss the point. Billy Juice is NOT that great of a fighter. He's fought limited opposition that made him look elite. And the one guy who really came close to testing him was shocked by the bright lights and…

[QUOTE=pittapatta66;20486907]Well clearly your judgement is clouded with hate for BJS (I dislike him too) or you DKSAB. In no universe does Ann Wolfe beat BJS, that's just silly. Beyond silly. Worse than thinking McGregor or Ronda beats Mayweather silly.[/QUOTE] You…

[QUOTE=revelated;20486302]Not when you're a professional fighter. It was not cool for him to say that to/about someone who was brave enough to get in the ring and get punched in the face for a living. They deserve respect, and prime…

[QUOTE=Ray*;20486343]He is a gypsy, he doesn’t need a PR team. Most of them are hated here. He is always trying this s hit on, he has zero class. The issue here is people see what he does and say and…

[QUOTE=MulaKO;20486147]Fugh me but doesn’t he have pr people to advise him This is totally going the wrong way If he wants to portray the heel character there are other ways about it This is just stupid imo[/QUOTE] He is a…