Once Hopkins, a partner in Golden Boy Promotions, admitted to him that the company’s emerging star, Ryan Garcia, mentioned his son’s name last while rattling off upcoming opponents because Devin Haney is the best boxer in that group, Haney’s father and trainer made a declaration in front of several videographers.

Hopkins reminded Haney that his son could drop back down from 140 pounds to 135 when the time is right to fight Garcia. 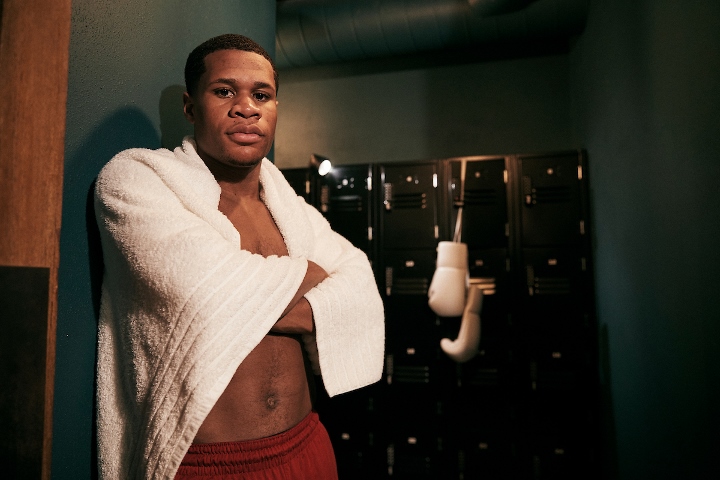 Mikey Garcia (39-1, 30 KOs) is preparing for his second straight welterweight bout, a 147-pound fight versus Jessie Vargas (29-2-2, 11 KOs) on February 29 in Frisco, Texas. Nevertheless, Mikey Garcia, a former IBF 140-pound champion, also has expressed a willingness to return to the junior welterweight division for the right fight.

DAZN – the streaming service with which Haney’s promoter, Eddie Hearn, works – will stream the Garcia-Vargas fight from Ford Center at The Star, the Dallas Cowboys’ training facility. Las Vegas’ Haney (24-0, 15 KOs), the WBC’s lightweight champion in recess, isn’t expected to fight again until sometime in the summer because he is recovering from shoulder surgery.

The younger Haney confronted Ryan Garcia (20-0, 17 KOs) in the ring following the 21-year-old lightweight contender’s one-punch, first-round knockout of Nicaragua’s Francisco Fonseca (25-3-2, 19 KOs) on Friday night at Honda Center in Anaheim, California. Haney challenged Ryan Garcia to fight him next, but Garcia is expected to face former WBA and WBC lightweight champ Jorge Linares in his next bout.

Venezuela’s Linares (47-5, 29 KOs) knocked out Mexican veteran Carlos Morales (19-5-4, 8 KOs) in the fourth round on the Garcia-Fonseca undercard Friday night to set up the Garcia-Linares bout for some point this summer at Staples Center in Los Angeles.

“Nah, nah, nah, nah,” Ryan Garcia said when asked by BoxingScene.com if he would consider facing Haney next. “Like I already proclaimed it last year – I’m gonna get Linares next. Then I’m gonna get Luke Campbell. Then I’m gonna beat down ‘Tank’ [Gervonta Davis]. And then, 2021, we can see where Devin’s at. I wanna see what Devin [does], because I’m putting up the performances. Where’s yours? You know, you’re a f--king champ, so like, you’re calling me out. What does that mean? I’m the real f--king champ. I’m the champ. If you’re calling me out, I’m the f--king champ.

“You ain’t the champ, and I told him to his face, ‘If you’re a champ, I’m a champ.’ And I turned up on him. He knows it. I have respect for him, though. He’s a talented fighter – fast jab, good boxing skills. Didn’t have a good performance [in his last fight against Alfredo Santiago]. Maybe he needs to assess himself a little bit. But I want him to be great, so we could have a great fight.”

Who da fook is that guy?(Conor McGregors voice) rather fight that little girl victoria at 147 then this young character named kevin chaney or whatever his name is.

[QUOTE=Input1914;20419088]This is a real shame as there are fights to be made at 135. This era of boxing has got to be one of the worst in terms of matchups. There have been way too misses[/QUOTE] Green Karma Point for…