Bilal Akkawy was already preparing to be part of boxing’s biggest weekend of the year. The upgrade he’s about to receive is all the proof you need that it’s always better to stay ready than to have to get ready.

BoxingScene.com has learned that the unbeaten super middleweight from Australia has agreed to face England’s John Ryder in an interim World Boxing Association (WBA) 168-pound title fight. Their bout will take place May 4 at T-Mobile Arena in Las Vegas, Nev., in supporting capacity to the World middleweight championship between Saul ‘Canelo’ Alvarez and Daniel Jacobs, with the show to stream live on DAZN-USA.

“That’s the plan, it has been approved by the WBA and the Nevada State Athletic Commission,” Roberto Diaz, executive matchmaker for Golden Boy Promotions confirmed to BoxingScene.com on Monday. 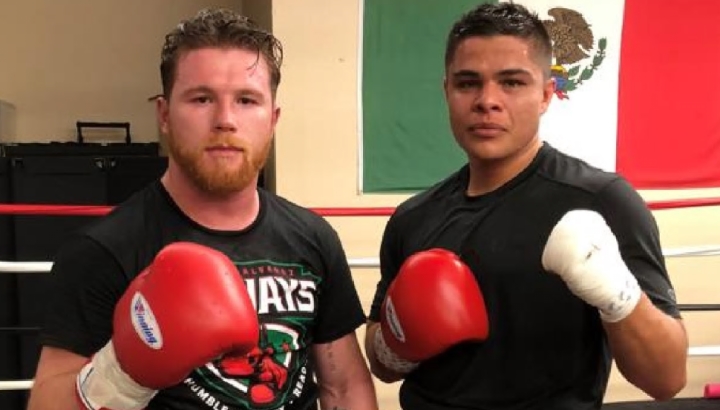 Akkawy (20-0-1, 16KOs) replaces former middleweight titlist David Lemieux, who suffered an injury during training camp and was forced to withdraw from the show. The unbeaten boxer—who turns 26 in May—was already in training with Alvarez’s camp in San Diego for a showcase fight on a May 2 card in Las Vegas, but willingly stepped up to accept the late assignment and what will serve as the biggest opportunity of his young career.

His name came up as a potential replacement in efforts to keep Ryder (27-4, 15KOs)—the current mandatory challenger to WBA 168-pound champ Callum Smith—on the card and in an interim title fight.

The Lemieux-Ryder pairing was originally designated as the evening’s chief support. This matchup hasn’t been branded such honors, as event handlers are sifting through the full lineup to determine the final running order.

The winner will be in line for a title consolidation bout with Smith, who will appear on the June 1 undercard of Anthony Joshua’s U.S. debut at New York City’s Madison Square Garden. The venue also served as the home for Akkawy’s most recent stateside appearance, scoring a 7th round knockout of Victor Fonseca last December.

Akkawy’s appearance on the show came in support of his stablemate Alvarez, who made his MSG and DAZN-USA debut that evening in a 3rd round knockout of Rocky Fielding. The win netted the Mexican superstar the WBA “Regular” title—a belt which he still possesses but is unlikely to ever defend given his full plate at middleweight where he reigns as lineal champ.

The bout will be Akkawy’s third in the United States, all coming in the span of his past four fights. His stateside debut came last September, on a Thursday night show in Las Vegas preceding the rematch between Alvarez and Gennady Golovkin later that weekend.

Akkawy was prepared to play a similar role this weekend until being presented with the opportunity to fight for his first major title.  It leaves a void on a May 2 show that also includes another candidate to have landed the opportunity versus Ryder, Canada’s Steven Butler who was ready to take the fight but whom has never fought above middleweight.

A Ryder-Akkawy pairing makes far more sense, even from a sanctioning body standpoint. Ryder is the mandatory challenger, while Akkawy is presently ranked number four by the WBA.

Officials for the bout will be selected during the next Nevada monthly commission agenda hearing, which will take place Wednesday morning at NSAC headquarters in Las Vegas.

Good test for the Akkawy kid

Thought this was a possibility, Ryder should win

[QUOTE=ELHITMAN606;19682464]I genuinely hope they're paying you[/QUOTE] I own a tattoo parlor. I have a state of the art chimp who was an extra in the Lawnmower Man. He is so intelligent. Unfortunately the only customers we have are satanic black…