The Russian knockout artist stopped Gvozdyk in the second round of a 2009 amateur match in Istanbul, Turkey. Beterbiev views that triumph as ancient history, however, and realizes that he’ll encounter a much more formidable fighter when they square off for two 175-pound championships October 18 in Philadelphia.

“The past is the past,” Beterbiev told BoxingScene.com recently. “That happened a long time ago. He’s a different fighter now because 10 years have passed. It’s a different story. I can’t go in there thinking that will happen again because it happened then.” 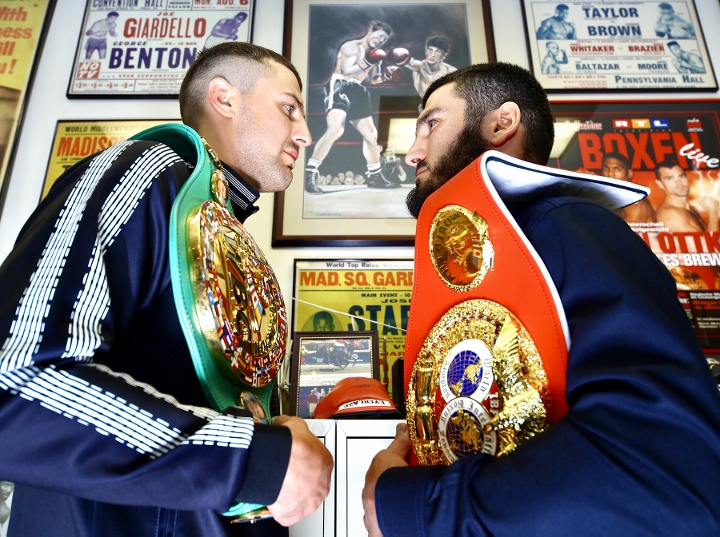 Beterbiev, 34, has knocked out each of his professional opponents. He still refrained from predicting the same fate for the undefeated Gvozdyk.

“I prepare and train for 12 hard rounds,” Beterbiev said. “Whatever it will be, it will be.”

Gvozdyk also downplayed Beterbiev beating him in the amateurs during a recent interview with Alexander Pavlov.

“I went into that fight with a broken nose,” Gvozdyk recalled. “For me, this was the first trip with the national team, and Beterbiev was already a great amateur champion. But that was 10 years ago. Today, both of us are different boxers. We’ll see.”

Gvozdyk likened his previous experience with Beterbiev to throwing him “in there like a victim into a tiger’s cage.”

The 32-year-old Gvozdyk (17-0, 14 KOs) is a slight favorite over Beterbiev (14-0, 14 KOs), despite Beterbiev’s vaunted power and the outcome of their amateur match. The Ukrainian champion changed the course of his career by knocking out long-reigning WBC light heavyweight champion Adonis Stevenson (29-2-1, 24 KOs) two fights ago.

Stevenson suffered serious brain injuries from that 11th-round knockout defeat December 1 in Quebec City, Canada, but he is on the road to recovery.

Beterbiev and Gvozdyk will fight for Beterbiev’s IBF 175-pound championship and Gvozdyk’s WBC crown. ESPN will televise their scheduled 12-rounder as the main event of a telecast from Temple University’s Liacouras Center.

[QUOTE=ShoulderRoll;20131092]:crying::crying: My America runs this sport. Don't ever forget it. That's why these two are getting good money to fight in an American city on American tv.[/QUOTE] Of course America runs the sport, that's why it is all a confused…

[QUOTE=Angeljuice;20130922][B][/B] And what boxing would be like if loud mouthed Americans weren't involved. I don't know why they bother, they all say the same things and it never pans out. Just say nothing we already know what you're going to…

[B][/B][QUOTE=tophat1;20130600]These two seem really respectful going into this, top level unification , no fake drama. This is what boxing should be all about[/QUOTE] And what boxing would be like if loud mouthed Americans weren't involved. I don't know why they…