Beterbiev: Right Now, Gvozdyk is Only One I Need To Worry About

Artur Beterbiev means it when he insists that all of his attention and focus is squarely placed on his own task at hand.

The two-time Russian Olympian and reigning light heavyweight titlist remains locked in for his unification bout with World (lineal) 175-pound champion Oleksandr Gvozdyk. The pair of unbeaten title claimants collide live on ESPN this Friday from the Liacouras Center on Temple University campus in Philadelphia, Pennsylvania.

While highlighted among the most notable fights amidst a loaded fall boxing schedule, it also lands squarely in between two other relevant divisional title fights—although it’s apparently news to the 34-year old knockout artist.

“When I fight, I truly block out everything else,” Beterbiev (14-0, 14KOs) insisted to BoxingScene.com. “I’m always focused on just my fight when I train. I know (Gvozdyk) is a champion because he is who I’m fighting next. I don’t even remember (fellow titlists Dmitry Bivol and Sergey Kovalev) until their names are mentioned to me.” 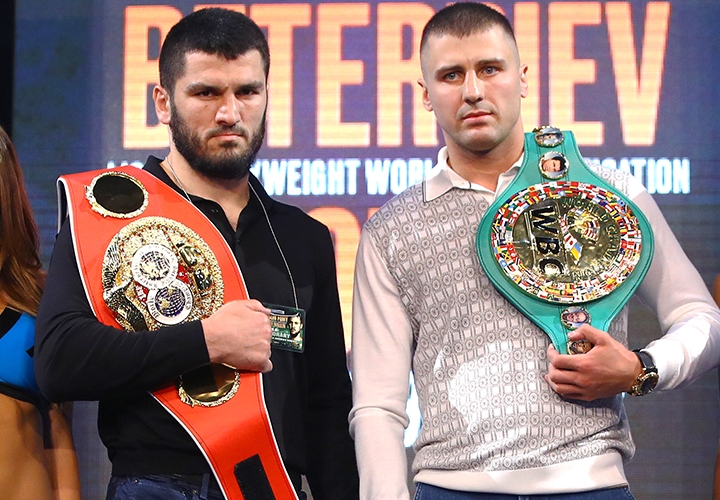 Bivol (17-0, 11KOs) didn’t do himself any favors in having Beterbiev or any other divisional peer remember his name in his most recent outing. The unbeaten light heavyweight title lodged his sixth successful defense in a lopsided 12-round decision over Lenin Castillo last Saturday in Chicago, Illinois. The DAZN-streamed bout came in supporting capacity to Oleksandr Usyk’s heavyweight debut and was largely forgotten by the end of the night.

Still, it remains relevant to the light heavyweight picture, as does this weekend’s unification bout along with the Nov. 2 clash between three-time and defending titlist Sergey Kovalev (34-3-1, 29KOs) and World middleweight champion Saul ‘Canelo’ Alvarez (52-1-2, 35KOs).

The latter bout—which will air live on DAZN—will perhaps greater resonate with Beterbiev once he's done with Friday’s affair.

[QUOTE=MDPopescu] ... that's the dilemma in this fight: will be Gvozdyk capable to stay at the distance and keep Beterbiev off him?...[/QUOTE] [QUOTE=Superbee;20125167]I doubt Gvozdyk will go full Koelling and put his gloves up all night just trying to weather…

[QUOTE=Squ□redCircle34;20123625]Ahh at last the fight we’ve been waiting for![/QUOTE]Me too, I'm really looking forward to this match up. If Beterbiev's boxing skills have NOT been underestimated, I think Gvozdyk takes it, UD.

[QUOTE=MDPopescu;20123826]... that's the dilemma in this fight: will be Gvozdyk capable to stay at the distance and keep Beterbiev off him?... (an "organized" German -- i.e. Koelling -- managed to resist nearly 12 rounds vs Beterbiev)...[/QUOTE] I doubt Gvozdyk will…

Gvozdyk by UD. Beter definitely is a KO artist with crazy power in his gloves so Gvozdyk should bet everything on the footwork and outpoint Beter without getting into scraps with him

[QUOTE=CasperUK;20123814]Johnson was also a big puncher and also had excellent short range power. [B]Gvozdyk fights taller and needs more space to generate his power[/B]. If this is a close-up brawl then Beterbiev will really hurt him. If OG can keep…