Beterbiev-Deines To Be Rescheduled For Dec. 11 in Moscow, Without Vlasov-Salamov

Unified light heavyweight world champion Artur Beterbiev’s title defense against Adam Deines will be rescheduled with the probable date being Dec. 11 at the 14,000-seat CSKA Arena in Moscow, a source with knowledge of the plans told BoxingScene.com.

The fight will be shown on either ESPN or ESPN+ in the United States.

The fight was supposed to take place on Oct. 23 in Moscow but Beterbiev suffered a rib injury during his training camp and the entire card was postponed. 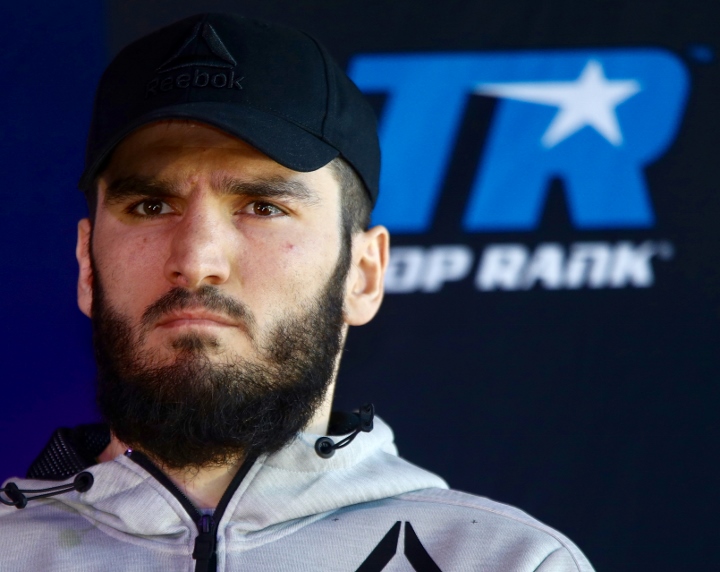 While the Beterbiev-Deines bout will move into December, the light heavyweight world title elimination fight between Russian countrymen Maxim Vlasov (45-3, 26 KOs) and Umar Salamov (25-1, 19 KOs), which was supposed to be the co-feature, will no longer be on the card. Instead, according to the source, that bout will take place on another card on a date to be determined prior to Dec. 11.

Winner of the Vlasov-Salamov eliminator is due to square off with Joe Smith Jr. (26-3, 21 KOs) for the 175-pound world title vacated by Canelo Alvarez.

Smith knocked out former world titlist Eleider “Storm” Alvarez in the ninth round on Aug. 22 in Las Vegas in their semifinal eliminator to earn the title shot against the Vlasov-Salamov victor.

The Montreal-based Russia native Beterbiev (15-0, 15 KOs), 35, has not fought since he knocked out Oleksandr Gvozdyk to unify a pair of 175-pound world titles and send him into retirement last October in Philadelphia because of various postponements plus a change of opponents.

Beterbiev’s first fight after unifying the belts was supposed to headline a Top Rank on ESPN card on March 28 in Quebec City, Canada against mandatory challenger Meng Fanlong (16-0, 10 KOs), a 2012 Olympian from China, but the card was scrapped due to the coronavirus pandemic.

The fight was eventually rescheduled for Sept. 25 in Ekaterinburg, Russia, but Meng dropped out due to visa issues and was replaced by Deines. The fight was then moved to Oct. 23 in Moscow to pair it with Vladov-Salmov. Top Rank originally wanted Vlasov-Salamov take place in the U.S. but because of travel issues related to the coronavirus pandemic, Top Rank’s Russian partners on the bout decided to stage it in Russia.

When Beterbiev, a two-time Russian Olympian, finally gets into the ring he will be making his fourth title defense. He will also be fighting for the first time as a professional in Russia. All of his bouts have taken place either in Canada or the U.S.

Deines (19-1-1, 10 KOs), 29, a Russia native fighting out of Germany, suffered his only loss by unanimous decision to Meng in a title elimination bout in June 2019, but he has won two in a row since. He has been idle since last September.

Have them on the Berchelt vs Valdez undercard!