Teofimo Lopez has officially reached the level Frank Sinatra used to sing about.

He’s made it anywhere.

And now it he ought to get a shot to make it there.

The chatty 23-year-old took his trash-talking act to the Las Vegas bubble last weekend and emerged as the sport’s newest superstar after outpointing triple-crown champion Vasily Lomachenko to add two more belts to the IBF share of the 135-pound title he’d won 10 months ago.

“I see a Duran-like willingness to box, pressure and slug it out,” gushed Randy Gordon, whose resume includes ESPN, Ring Magazine, the New York State Athletic Commission and SiriusXM Radio. “He can step on the gas or bide his time. Plus, his charisma and being bilingual is going to transcend the sport.”

Indeed, Lomachenko, who’d not lost since his second pro fight – six years and nine pounds ago – was a daunting task. And the sublimely skilled Ukrainian had some success, particularly in a second-half surge which had Lopez reeling as he began showing wear from the 32-year-old’s mounting onslaught.

But when the 12th round arrived, the youngster proved he belonged.

Lopez vaporized any scorecard drama with a mouthpiece-chomping last stand, stalling his pursuer with a withering body attack and landing the session’s most telling shot in the form of a right hand to the head that left the unified champ as rattled as he’d been in the initial 33 minutes.

Game. Set. No need for a rematch.

“Good fighter, terrific puncher,” ex-lightweight champ Ray Mancini said. “Kept his composure when he needed to, which was a big factor.”

Unbeaten in 16 fights—including two for world titles—Lopez was quick to forecast the future.

“It's the takeover,” he said on ESPN. “It's time for the new generation to come up.” 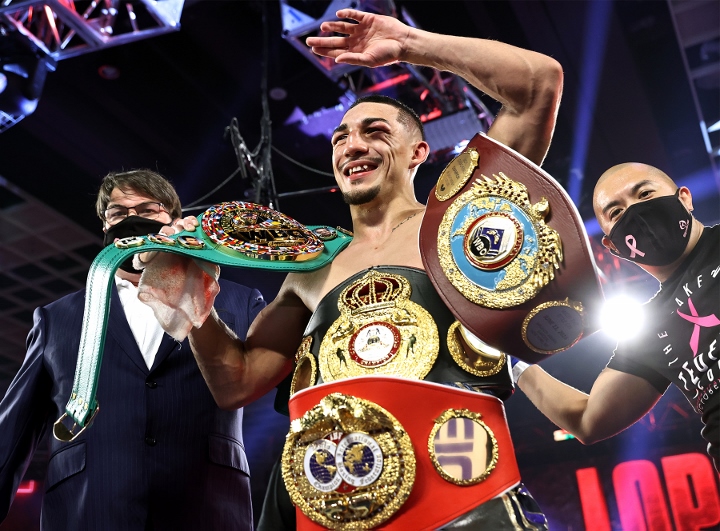 Of course, given the promotional handwringing that’s become a signature element of modern boxing, it’s always something of a crapshoot to predict what a guy will do going forward.

But regardless of how the politics fall out, there’s no question Lopez has got options aplenty.

None, though, are more attractive than a guard-changing duel with Manny Pacquiao.

Now less than two months shy of 42, the Filipino has been on the shelf since a relevance-restoring 2019 double play that consisted of decisive beatings of Adrien Broner and Keith Thurman.

The back half of that twin-killing yielded the WBA’s top-tier belt at welterweight, though the veteran’s team has long argued that his best fighting form comes a few pounds south of 147 pounds.

In fact, Pacquiao hasn’t maxed out at the division’s upper end since back-to-back losses to Timothy Bradley and Juan Manuel Marquez in 2012, dipping as low as 143¾ for a rout of Chris Algieri in 2014 and ticking up to 145½ for the aforementioned downing of a then-unbeaten Thurman 15 months ago.

Lopez, meanwhile, is 4-for-4 in the instances he’s gone a hair past lightweight, scoring two KOs and two wide decisions across 10 months in 2017-18.

The new lightweight king presciently referred to Pacquiao during a pre-Lomachenko conference call, suggesting Bob Arum would soon affix a heady label to his rising stock – and foreshadowing the sort of mega-fight in which an aging legend could put him over as the next big thing.

“I look forward to taking more things and moving along,” Lopez said.

“Maybe I’ll move up to 140 after. Who knows. Who knows what my future holds. I know one thing, Bob is gonna call me the next Manny Pacquiao when I take over and stuff like that.”

It’s the sort of legend vs. upstart script that writes itself.

And where better to stage it than New York?

Lopez has played midtown Manhattan five more times since arriving there for his third pro fight in 2017, while Pacquiao is a natural for a Madison Square Garden premiere after spending most of his domestic career selling out casino arenas Las Vegas or filling a cavernous football stadium in Texas.

“That would be a huge fight and a great fight,” the promoter said a few years back, regarding a would-be Pac-Crawford match. “If you really think you have a great fighter with superstar qualities, you move him that way; you don't protect him. You move a superstar into the biggest fights you can make for him, and that's what we are going to do.”

That one obviously never happened.

And it’d be a shame to make the same mistake with a different generational talent.

So here’s a suggestion, Bob… Don’t.

“Pac is a great place to start.”

Fitzbitz says: Moloney’s a tough, rugged kid with some pop and a lot of heart. But Inoue is on another level, has proven it against better fighters and will beat on him for as long as he lasts. Inoue in 7 (99/1)

Fitzbitz says: Everything tells me to pick Davis because he’s stronger and more powerful, and Santa Cruz doesn’t KO fighters at heavier weights. But I just feel like Leo finds a way. Santa Cruz by decision (51/49)

Why it’s garbage: Same old, same old. The WBA has a super champ, a world champ and a gold champ at 140, not to mention an interim champ. If you recognize anyone other than Josh Taylor, you’re a chump.