The Smoke was put out for good last week.

He was a cult hero, known for his mesmerizingly violent battles with Evander Holyfield, Michael Moorer and Ray Mercer, among many others. He once boasted to me of the job he did on Mercer’s broken jaw that it looked like the 1988 Olympian was holding a grapefruit in his mouth.

‘Smokin’’ Bert was good, but he was not as good as he could have been. This is not another tired ‘he could’ve been a contender’ spiel. Bert was really bloody good. He was a warrior when he wanted to be but there was a psychological fragility that sometimes meant if the going got tough, he went walking. He bailed against George Foreman when whacked hard to the body, he opted not to continue against Carl Williams, Nate Miller and Darrol Wilson. Maybe that’s hard for Copper-ites to swallow, it is even hard to write given the fantastic brawls he more than held his own in. But you cannot deny someone’s past, you must accept good and bad. It speaks volumes about the type of battles he was involved in that so often it’s skimmed over what he didn’t do rather than what he did.

And of course, Bert had his reasons.

He might have downed tools if he hadn’t been treated right by a promoter, if he didn’t like his spot on the B-side or if he felt he had been worthy of a higher pay packet.

There were times when he just didn’t want to go to work because he’d been distracted. Cooper had countless stories that would run for hours of women, pimps, cocaine and drug-fuelled binges that would last for several days during training camps that were cut short while he went missing. Sometimes he returned, sometimes he did not. Sometimes he would disappear back to his mansion, his old ghetto or wherever took his fancy.

Because the Cooper story did once involve wealth – if only for a while. He told me of his old Westchester estate, one with a swimming pool, tennis court , a Porsche 944 Turbo on the driveway and the BMW he’d brought for ‘a girl’.

Unfortunately, when Bert could no longer give there was no one around to help him receive. It’s a weary old tale, how the sport turns its back on those who need its help the most. Yet with no ruling body charged with assisting old fighters, the only person with a duty to look out to Bert was Bert. 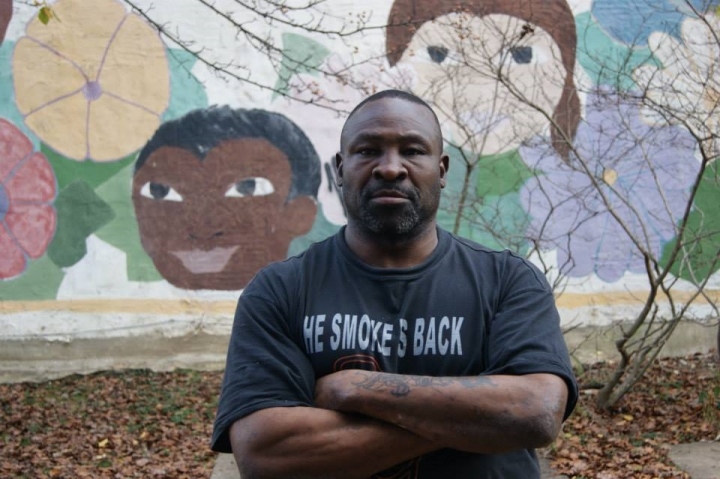 It took the longest time for him to realise he no longer had it, that he would have to focus on making a living another way – away from the ring.

That is why he fought on so long, that and the fact that he had a few more drops of blood to spill, a few more prospects to annihilate and a couple more harsh lessons to learn.

When we first met, when Bert was 46, he was grabbing odd jobs as a painter and decorator. We borrowed his boss’s office for the day. “Are you good at it?” I asked, expecting the typical overconfident boxer’s reply.

He looked at me and leaned closer so his line-manager couldn’t hear. “I wouldn’t say good,” he grinned.

That was a stop-gap for Bert. He was still trying to fight and had not accepted it was all over.

He was approaching 50, smeared in a paint-splattered jump suit from work. He was trying to carry the flames from his career forwards. He wore a grey sweater over the top that said ‘WBF world champion – Smokin’ Bert Cooper’ with his picture on, and underneath he had a black T-shirt threatening his next move in the ring. ‘The smoke is back’ was emblazoned across the front. “I will fight until the commissions stop giving me a licence,” he grizzled. “What else is there for me to do? I work a little bit here and there, but it is what it is. I’ve still got some fight in me. I want to go out right.”

He said doctors were happy with his overall health, cholesterol levels and blood pressure.

He was eating oatmeal for breakfast, took vitamins and was running each morning. He was training amateurs, too, and was a member of his Christian Church.

When we met in Canastota in upstate New York last year, the mantra was similar.

“I have early-part dementia. I was diagnosed in Vegas by neurologists. Symptoms are I’m good but sometimes I get tripped up on my words, I can’t think and my equilibrium is off a little bit.

“It [the dementia] makes you slobber, your mind goes, your speech goes. My speech is pretty good, it ain’t bad.

“I eat good, I eat healthy, I eat nuts, almonds, oatmeal with honey or blueberries and strawberries, you know what I’m saying? I eat healthy now. I’m having vitamins.”

But it’s not where he was, it’s where he’d been.

I asked what he was hooked on, women, drink or drugs.

“All three,” he said candidly, before another story about alcohol, late nights, ladies and smoking crack before saying that it had cost him “pretty much everything.”

“Hundreds of thousands,” he said. Then he added, “I could say millions.”

So what if he’d been completely clean for his big fight, a short notice attempt against world heavyweight champion Evander Holyfield.

“Bam,” he was gone, he said of the shot that had Holyfield rocking and rolling, slamming his right fist into his left hand. Bert was hoping for a rematch nearly 25 years on.

“I would have walked right through him,” he smiled.

Cooper cleaned himself up in 2007, found God, became bored of partying and he was tired of it all. He rolled the boxing dice again but an up and coming Luis Ortiz hammered him.

When we met in Canastota last year, he was in decent health despite confirming he had been diagnosed in Las Vegas with an early form of dementia, courtesy of the sport.

“Do you still want to fight?” I asked.

“No, it’s over. My time has gone,” he admitted, and he was at peace with that.

He spoke of a healthy lifestyle, one he’d started when we met in 2012, and he looked forward to growing old as gracefully as a bruised old warrior can.

With relatives who had lived into old age, Bert was ready for the long haul.

So it was a terrible shock when news spread of his passing last week.

We had only recently been in touch about him being a guest on my Boxing Life Stories podcast.

He said he would do it, then, about 10 minutes after we began he changed his mind.

Cooper then talked about how he would make a fortunate, selling the rights to his life story, earning riches that would last him to the end. You hear the same thing time and again. Everyone thinks they’re the next LaMotta or the next Hurricane, but they’re not. The truth is, so many fighters are film worthy but you just cannot turn each one into a lucrative blockbuster.

Cooper’s dream was of the ‘pipe’ variety, sadly.

I felt for him. I really did.

The penultimate time we spoke he was in hospital overnight. He said it was just for a check-up, that he was in good health and that we would speak at length soon. Then, when next talked, I promised I would meet him in Pennsylvania and we would do the podcast. He happily agreed.

That was the last time I spoke to Smokin’ Bert Cooper, Joe Frazier’s once ‘Smokin’ protege. The man was an enigma and remained one even in retirement. He was a tortured soul, tortured by boxing, by drugs, by alcohol and by losing it all. But he was a good man.

He was a kind, deep man who had straightened himself out and who had said he had turned his life around. Typical Bert, though. It was too little, too late. One of boxing’s last heavyweight action heroes was gone for good.

Man, this death shocked me. Bert was a real likable guy. But it's sad to see boxers go through these ups and downs (whether by his own faults or someone else's) that in the end, they only have themselves to…

When Bert was on his game, he was tough as nails, tough to beat. His wins over Joe Hipp, Henry Tillman and Willie de Wit were epic. R.I.P. Champ.

[QUOTE=BIGPOPPAPUMP;19738963]By Tris Dixon - The Smoke was put out for good last week. Sharon Hill, Pennsylvania heavyweight thrillseeker in the 1990s Smokin' Bert Cooper succumbed to pancreatic cancer. He was a cult hero, known for his mesmerizingly violent battles with…

Touching article. Nice to see a forgotten man get a nod. Rest In Peace, Bert.

Jesus man, this one hurts. What a great action fighter, man. I hate when people die without getting their due. There's just something so unfair about it. But I never will understand how people who spend their whole lives struggling…