Bernard Hopkins: Ryan Garcia Is At The Door Of Making History

Bernard Hopkins will be officially inducted into the International Boxing Hall of Fame later this year.

Hopkins, a partner in Golden Boy Promotions, believes the stable’s touted 21-year-old prospect in Ryan Garcia is headed on the same path to greatness.

“Ryan Garcia is at the door of history,” Hopkings told BoxingScene.com in an interview. “We see the progress faster than any young fighter who started at his age. It’s amazing.” 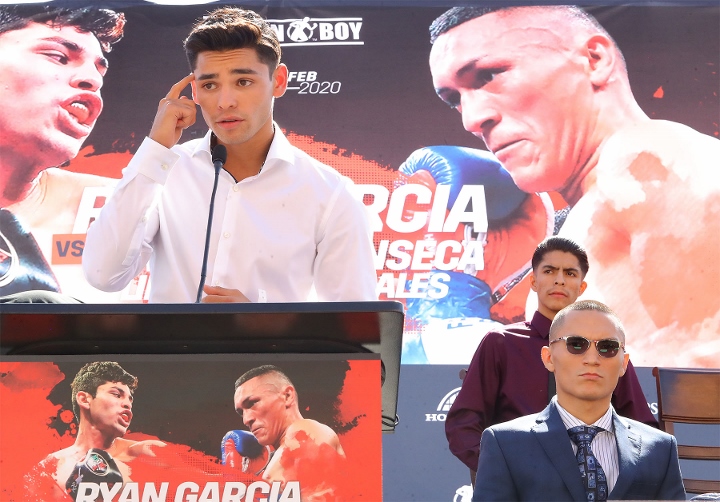 Hopkins believes much of the flak that Garcia receives, most of which is misguided criticism, is still making the 21-year-old stronger mentally.

“Some criticism is good. If you don’t have criticism and just have praise, then you might not turn out to be successful. What Ryan is experiencing is all a part of the growth. Can he take it mentally … when someone says he’s a Hollywood-Instagram fighter?” said Hopkins. “I heard a lot of things. But he’s heard it also. How does he channel that and use it as a positive rather than a negative?”

Garcia is already calling for significant fights, and he’s viewing 2020 as a boom or bust year. He’s already talking a big game as well, calling out the likes of Gervonta Davis.”

“When you’re handsome and have a nice core to you and a responsive attitude, and you can fight on top of that, you’re going to get the naysayers. He has the skills and the smarts. You’re definitely going to get some jealousy, and I’m sure it’s more men than women who are jealous. He’s the modern day Oscar De La Hoya.”

I loved watching B-hops career. A man of discipline which gave him longevity. Very impressive! Some of his youtube interviews are long and very boring. But, there are a few that are gems.

[QUOTE=Curtis2;20390143]Golden Boy wants Tank fight bad...Hell no Floyd ain't making this fight...he knows Tank's trash, Floyd pissed off and totally embarrassed with Gamboa fight...Garcia would toy with Tank, TKO finish![/QUOTE] I'm not so sure that Garcia would "toy" with Davis…

I just dont think he can take a punch.Hes yet to be really tested.But he looks decent.

[QUOTE=tokon;20389990]If Garcia comes through this wejends fight in style and continues calling Gervonta out, it will a bad look for Mayweather not to make that fight this year.[/QUOTE] Golden Boy wants Tank fight bad...Hell no Floyd ain't making this fight...he…