There is a certain faction of the industry who would love to see Edgar Berlanga keep alive his current streak of 1st round knockout wins.

Then there are those who would like to see another level to his game and for an opponent make him work over the long haul. You can count the Brooklyn-bred Boricua knockout artist among that group.

“The one thing fans are missing is me going rounds and really being able to see my boxing skills,” Berlanga (14-0, 14KOs) told BoxingScene.com of the downside of the explosive start to his pro career. “I feel like my skills, the boxing skills I have are on another level right now.

“But nobody’s really getting to see it because all they see are the knockouts. A lot of people are calling me the Puerto Rican Mike Tyson, just a one-punch power hitter. They don’t even know I have boxing skills.” 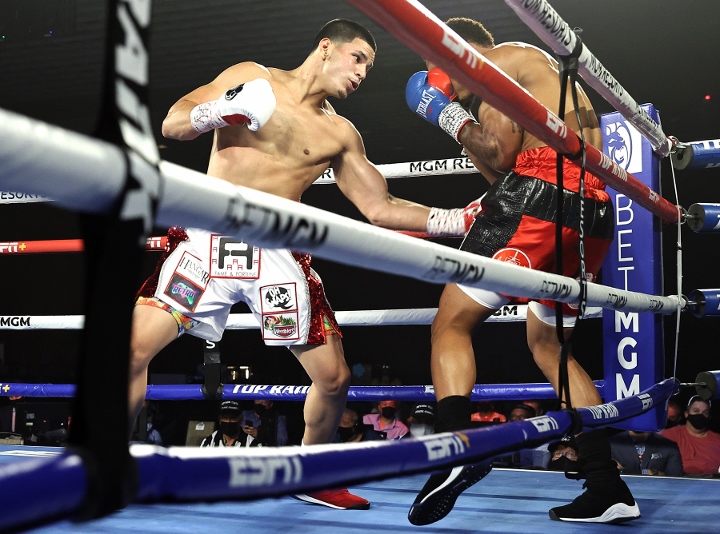 The deepest that the 23-year old has been extended to date came in the final fight of his 2019 campaign. Just four months after needing 2:24 to rid the ring of Gregory Trenel last August, Cesar Nuñez threatened to force Berlanga to see round two of their middleweight clash last December at Madison Square Garden. The Spaniard boxer fell 0:15 short of that dream, as Berlanga scored two knockdowns to force the stoppage and make it 13 in a row inside the first round.

Eric Moon (11-3, 6KOs) became the 14th victim, as a right hand from Berlanga produced the ending at just 1:02 into the 1st round of their ESPN-televised fight this past July live from The Bubble at MGM Grand in Las Vegas. Berlanga returns to that very venue this weekend, as he faces veteran Lanell Bellows (20-5-3, 13KOs).

The bout opens a three-fight tripleheader on ESPN (Saturday, 10:00 p.m.), in supporting capacity to the World lightweight championship between Vasiliy Lomachenko (14-1, 10KOs) and Teofimo Lopez (15-0, 12KOs). Bellows has never been officially stopped in a fight, though what was a 3rd round knockout loss to Mike Snider in June 2017 was changed to a No-Contest after Snider came up dirty for a banned substance. The locally-based 34-year old journeyman has been down before but can generally take a punch—and more importantly, recover from one as well.

“He has a lot of fights, he’s a veteran. He’s been a lot of rounds,” notes Berlanga. “He’s been dropped so he knows what it’s like to get up and finish a fight. What’s interesting for me is that when I hit guys, they don’t get back up. So it’s up in the air.

“I’m working hard, doing all the things I need to do to be ready. We have a game plan, we’re going to follow it. So it’s going to be up to him to make it a fight.”

Here to join all the other guys saying Tyson had skills too. And he isn't Puerto Rican. He is of PR descent. Dude was born and raised in NY. That said, he has looked solid so far destroying no-hopers. Need…

So this is the guy everyone has been telling me about??? Gonna have to make sure keep an eye on him.