Berchelt: I Want To Unify, Become a PPV Fighter Like Chavez

After an unexpected loss about four and a half years ago, Miguel Berchelt has ascended to become one of, if not, the best fighters at 130 pounds.

Berchelt brims confidence, but he maintains a balance of humility and hunger to push forward in his pro career.

Berchelt will need that and much more when he defends his WBC world title belt tonight against Miguel ‘Mickey’ Roman at the Don Haskins Convention Center in El Paso, Texas. 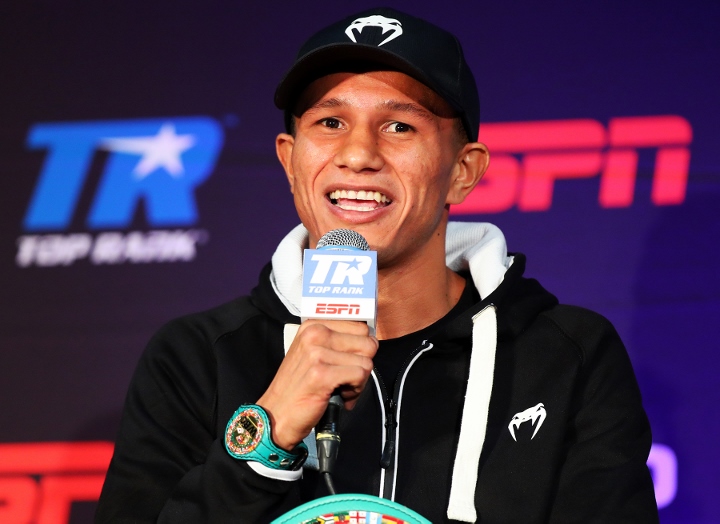 Berchelt (34-1, 30 knockouts) will be making the fourth defense of the WBC title tonight. In his last bout on June 23, Berchelt stopped Jonathan Barros of Argentina in the third round.

Promoter Bob Arum has stated during fight week Berchelt-Roman could be a candidate for fight-of-the-year, given the styles of both fighters that like to come forward and throw a lot of devastating punches.

“It is always a great show when two Mexicans fight in a ring,” Berchelt told BoxingScene.com in a recent interview. “This could be a like a (Marco Antonio) Barrera versus Erik Morales or even Rafael Marquez against Israel Vazquez. My fight against Roman won’t be an exception.”

A large amount of people will travel from Ciudad Juarez to watch Roman fight in person. Other world titleholders may think twice about defending their title in front of their opponent’s hometown or near it, but that does not both Berchelt.

“I didn’t have a problem fighting near his hometown,” said Berchelt, who is promoted by Zanfer Promotions of Mexico. “As a young fighter, even as an amateur, I would fight in different cities and towns in Mexico and abroad. I feel much comfortable fighting as the visitor. I know the crowd will be on his side because he lives close by and in his hometown of Ciudad Juarez, but when the fight is over, the crowd will very happy to see a Mexican with a belt.”

Berchelt may feel just as comfortable wanting to face the top fighters in the division. The 130-pound weight class has become one of the more competitive divisions in boxing.

Berchelt is eager to face any of the world titleholders at 130 pounds in an attempt to unify the division.

“I believe I’m one of the best fighters at 130 pounds. I don’t believe I’m the best. I’m not the fastest or most-technically sound fighter, but I’m a great champion. I’ve demonstrated that against Francisco Vargas and Takashi Miura. I’m a very versatile fighter. I can measure a fighter from distance or from the inside. I have two styles. It’s the most important detail, fighting forwards or backwards.”

“The most important thing is to defeat Mickey Roman. I would like to unify the belts after the fight. Those are the fights with the biggest purses. The people would like to see me face the other world titleholders in the division. I’ll be listening to all offers.”

Berchelt is originally from Cancun, but now resides in Merida. The area is long been known for their lush beaches, pyramids, and sight-seeing.

The area is not known for boxing in Mexico, like Mexico City, Guadalajara, Los Mochis, or Monterrey. But Berchelt believes there has always been talent, especially from those fighters who held world title belts.

“We’ve had great champions from the area where I am from. There’s a lot of talent in the southeastern part of the country. Miguel Canto, Guty Espadas, ‘Chato’ Castillo, Guadalupe Madera, etc. Miguel Berchelt is right there with them. There are great champions, but I’m creating my own path. I’ve won my last 13 fights. I think I’m doing well. Maybe I could even fight on pay-per-view.”

After establishing himself as an elite fighter in a competitive weight class, Berchelt would like to receive significant purses on a premium network, like Showtime, or on ESPN and DAZN.

With the continued success he is going to likely have at 130 pounds, Berchelt is not going to change anything in his life that has gotten him where he is at.

“I’ve never lost the hunger or the humility. It’s very important. My only loss did affect me because it was by knockout. I learned from that fight. I learned a lot about myself. I prepare myself to the best of my ability during training camps. I’m young and I want to be a pay-per-view fighter like (Julio Cesar) Chavez, (Marco Antonio), Barrera, etc. I want my kids to be proud of me.”

NOT even Canelo is PPV star. He is DAZN star.

So he wants to fight for COKE money???