Benavidez: Yildirim Fight Is Next; He'll Have Extremely Tough Time With Me

Benavidez couldn’t do that because he already had a contract for an optional defense of his WBC super middleweight championship versus Alexis Angulo. Colombia’s Angulo agreed to challenge Benavidez on April 18 in Benavidez’s hometown of Phoenix after Yildirim reportedly suffered a shoulder injury earlier this year that delayed his title shot.

The Benavidez-Angulo fight was postponed nearly four months due to the COVID-19 pandemic. If the heavily favored Benavidez beats Angulo in Showtime’s main event at Mohegan Sun Arena in Uncasville, Connecticut, the WBC has ruled that he must fight Turkey’s Yildirim next.

“That’s the mandatory fight,” Benavidez told BoxingScene.com. “The reason why it didn’t happen this time is because I was supposed to fight in April in Phoenix, Arizona, and Yildirim got hurt. He got hurt or something happened, and Angulo stepped up to the plate. The contract was already signed, so I feel like since he was the one to step up to the plate, I have to grant him that fight. You know what I mean? He was there and the contract was signed already. But if everything goes good [Saturday night], yes, Yildirim is next.” 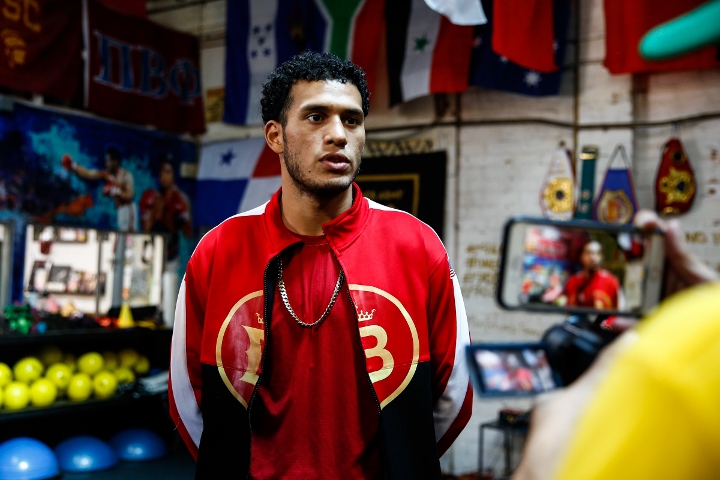 If Benavidez (22-0, 19 KOs) wins against Angulo (26-1, 22 KOs) and comes out of the ring relatively unscathed, he would want to face Yildirim either late this year or early in 2021. Benavidez’s long-range plans include a title unification fight with IBF champ Caleb Plant (20-0, 12 KOs) and eventually a very lucrative showdown with Mexican superstar Canelo Alvarez (53-1-2, 36 KOs).

“I wanna get back in the ring as soon as possible,” Benavidez said. “My momentum was rolling when I won the belt [from Anthony Dirrell], and then all this happened [with COVID-19]. I’ve almost been out of the ring for a year. I wanna fight at least three times a year, so if I can fight Yildirim by December or January, then that’s what we’re gonna do.”

Dirrell defeated Yildirim (21-2, 12 KOs) for the then-vacant WBC belt by technical split decision in February 2019 at The Armory in Minneapolis. A cut Dirrell sustained over his left eye during the seventh round prompted a ringside doctor to stop their scheduled 12-round, 168-pound championship match in the 10th round.

Two judges had Dirrell ahead by the same score, 96-94, when that fight was stopped. Dirrell was behind 98-92 on the other scorecard.

They went to the scorecards because Dirrell’s cut was caused by an accidental clash of heads.

Dirrell won the title that was stripped from Benavidez because he tested positive for cocaine in August 2018.

Benavidez – who knocked out a battered, bloodied Dirrell in the ninth round September 28 at Staples Center in Los Angeles – is confident Yildirim won’t be nearly as effective versus him as Yildirim was with Dirrell (33-2-1, 24 KOs). Yildirim hasn’t fought in the 17 months since Dirrell defeated him.

“I feel like Yildirim is the type of fighter who just has one type of style,” Benavidez said. “I feel like he’s gonna try to do the exact, same thing to me [that he did to Dirrell]. But he’s not gonna have the same type of success he had with Dirrell, you know, because Dirrell wasn’t doing nothing to keep Yildirim off of him. Dirrell had no jab. He was just trying to punch with him.

“Me, I have a jab, I have great body shots. You know, so I don’t feel he’ll be able to take the shots that I give him. I’m a way different fighter from Dirrell. I feel like I’m way stronger than Dirrell. So, I feel like he’s gonna have an extremely tough time when he gets in the ring with me.”

[QUOTE=theface07;20706225]Canelo vs Benavidez is the second best fight in boxing? You must be on crack.[B][SIZE="3"] Benavidez [/SIZE][/B]hasn't beaten anyone of note other than Dirrell. What's he gonna do against Canelo?[/QUOTE] he is better/tougher than Golovkin, and would beat him and…

[QUOTE=aboutfkntime;20704257]Benavidez is gonna body Angulo, and then body Yildirim I don't like the negative talk about Plant, people are sleeping on him... but who knows where the hate for Plant came from, because... he has never done anything to earn…

[QUOTE=BlackR0bbb;20703893]Get off David's nuts. Benavidez has been running his mouth for more than a year about fighting Plant. If he really wanted that fight, he'd step to Al and have it made. All the empty talk about wanting the big…

wow, disappointing for Benavidez maybe he needs to join SNAC, I dunno