Benavidez: Mark My Words, I'll Beat The F*** Out Of Crawford!

The unbeaten Benavidez is convinced he’ll pull off what would be boxing’s biggest upset of 2018 on Saturday night in Crawford’s hometown.

“He’s talking a lot of sh*t,” Benavidez told ESPN’s Mark Kriegel for a segment set to air on the network. “I’m gonna talk sh*t, too. It is what it is. I’m gonna beat his ass.” 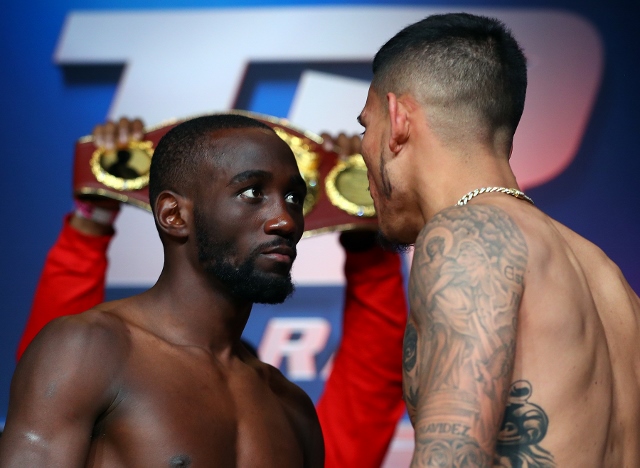 Internet sports books have consistently listed Crawford as at least a 25-1 favorite over Benavidez (27-0, 18 KOs), who won the WBA’s interim world super lightweight title before moving up to welterweight. Crawford typically has punished opponents that have excessively talked trash to him and he is certain the same fate awaits Benavidez when they square off for Crawford’s WBO 147-pound championship at CHI Health Center in Omaha, Nebraska (ESPN; 10:30 p.m. ET/7:30 p.m. PT).

“There ain’t nothing to think about,” Crawford said. “I’m gonna knock him out. That’s it. That’s all.”

The 31-year-old Crawford (33-0, 24 KOs) will make the first defense of the WBO welterweight title he won when he stopped Australia’s Jeff Horn (18-1-1, 12 KOs) in the ninth round of their June 9 bout at MGM Grand Garden Arena in Las Vegas. The 26-year-old Benavidez basically talked his way into this 12-round title bout by confronting Crawford at a weigh-in the day before Benavidez’s eighth-round technical knockout of Matthew Strode on February 3 in Corpus Christi, Texas.

Benavidez is 2-0, including two knockouts, since the Phoenix native resumed his career following an unsolved shooting in August 2016 that left him with a career-threatening leg injury. He knocked out previously unbeaten Venezuelan contender Frank Rojas (23-1, 22 KOs) in the first round on the Crawford-Horn undercard to help set up his shot at Crawford.

At 6-feet-2, Benavidez is six inches taller than the 5-feet-8 Crawford, yet will take a significant step up in competition against a two-division champion commonly considered one of the top two boxers, pound-for-pound, in the sport.

“It’s funny how he’s saying he’s gonna knock me out,” Benavidez said. “I want him to have that same energy that night. And mark my words, I’m gonna beat the f*** out of him.”

"Mark my words"....... Has Benavidez learned English lessons fom Tony Bellew? Wait for "no shadow of a doubt" next.The games really given away if he starts calling himself a "fat, mouthy scouser" though, lol

[QUOTE=kidbazooka;19190266]What you trying to say Crawford is more “thug “ cuz heeeee blaaaack???[/QUOTE] Why don’t you just answer you dumb troll. Jose is the one pushing people. Can’t control his emotions

Definitely numbers increase due to Benevides bravado. Bud can't sell and Top Tank will tank him soon. Maybe this is sleazy Bob's plan for tonight's fight.

Had he connected all that Omaha money to be made would be lost with no fight. All those racist Omaha Bud fans be shytting burritos and chicken. Just maybe Buds moms shuts her big mouth with this. Yet bud calls…

[QUOTE=BufordTannen;19190262]Lol if tc is a wannabe thug then what is Jose?[/QUOTE] What you trying to say Crawford is more “thug “ cuz heeeee blaaaack???