Benavidez: Whenever It Happens, I Will Knock Caleb Plant Out!

LAS VEGAS – Caleb Plant knocked out a bigger opponent easily Saturday night, but David Benavidez believes he’d be too big and too strong for the unbeaten IBF super middleweight champion.

Benavidez is focused now on regaining his WBC 168-pound championship from Anthony Dirrell on September 28 in Los Angeles. If Benavidez defeats Dirrell, though, he hopes a super middleweight title unification fight with Plant is next for him.

“That is a fight I want,” Benavidez said. “I don’t really see eye-to-eye with nobody. You know, so it’s personal with everybody. But I will knock Caleb Plant out. Whether it’s the next fight or the fight after that, it don’t matter what it is. It’s gonna be the same outcome every time. I will knock him out.” 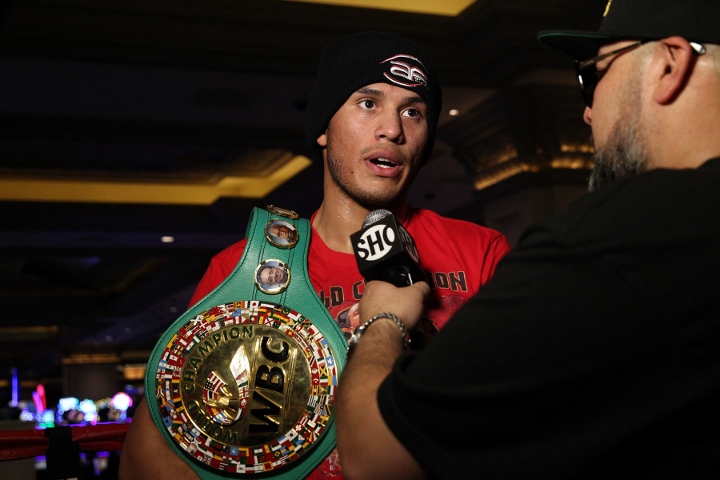 Plant (19-0, 11 KOs), of Ashland City, Tennessee, floored Mike Lee three times on his way to a third-round knockout earlier this month on the Manny Pacquiao-Keith Thurman undercard at MGM Grand Garden Arena. Lee (21-1, 11 KOs), of Wheaton, Illinois, moved down from light heavyweight to challenge Plant, yet took a steep step up in competition in their one-sided fight.

The unbeaten Benavidez will attempt to win back the WBC super middleweight championship that was stripped from him once he tested positive for cocaine late last summer. He knocked out veteran J’Leon Love (24-3-1, 13 KOs, 1 NC) in the second round of his last fight, March 16 at AT&T Stadium in Arlington, Texas.

The bout between Phoenix’s Benavidez (21-0, 18 KOs) and Dirrell (33-1-1, 24 KOs), of Flint, Michigan, will be part of the Errol Spence Jr.-Shawn Porter FOX Sports Pay-Per-View show from Staples Center. Benavidez is eager to showcase his power and boxing ability on that platform.

“I feel like I can be that next star because, you know, I’m bringing that old-school boxing back,” Benavidez said. “You know, I’m knocking people out. And if I’m not knocking them out, I’m beating them up the whole fight. And Anthony Dirrell’s a tough fighter. These are the kinds of fighters I wanna go up against – not only show it to my fans, but to myself that I’m the best super middleweight now in the world today. There’s so much good fights to be made in my weight division.

“Like, you’ve got Caleb Plant, Anthony Dirrell, Callum Smith. You know, maybe in the future, we can do something with Canelo. There’s just a lot of opportunities in front of me right now, so I’m just gonna take advantage of all of these opportunities. I’m gonna work hard and I’m gonna show everybody, all my fans and all my people, that I am the best super middleweight in the world.”

[QUOTE=skinnystev;19947536]notice he don't talk that crap to or at BJS. Benavidez can barely speak the language anyway functional illiterate[/QUOTE] Speak what ?? BJS speaks with that stupid accent that nobody understands and is also bilingual. Brits are overrated and look…

[QUOTE=skinnystev;19947536]notice he don't talk that crap to or at BJS. Benavidez can barely speak the language anyway functional illiterate[/QUOTE] I mean, he would be if he didn't speak his native language or read it, ????? Are you one because you…

I wanna see it. Honestly I favor Plant. The guy's slick as oil. Benavidez is kind of plodding at times.

Okay, so I take back what I said about nobody at 168 mentioning Benavidez. I didn't know Plant had "expressed interest" in fighting DB. We'll see who is still running their mouth after the Dirrell fight. I know people like…