Benavidez To Dirrell: PBC Saved You Against Yildirim!

LOS ANGELES – David Benavidez believes Anthony Dirrell was winning his fight against Avni Yildirim when it was stopped seven months ago.

Benavidez isn’t convinced, though, that Dirrell would’ve won had their fight lasted all 12 rounds. The former WBC super middleweight champion claimed during a press conference Wednesday that Dirrell had some in help in winning that title, which was vacant because the WBC stripped it from Benavidez for testing positive for cocaine a year ago.

“What’d Yildirim do to you?,” Benavidez asked Dirrell, his opponent Saturday night at Staples Center. “They had to save you. That’s why PBC had to save you and stop the fight, so this fight could happen.” 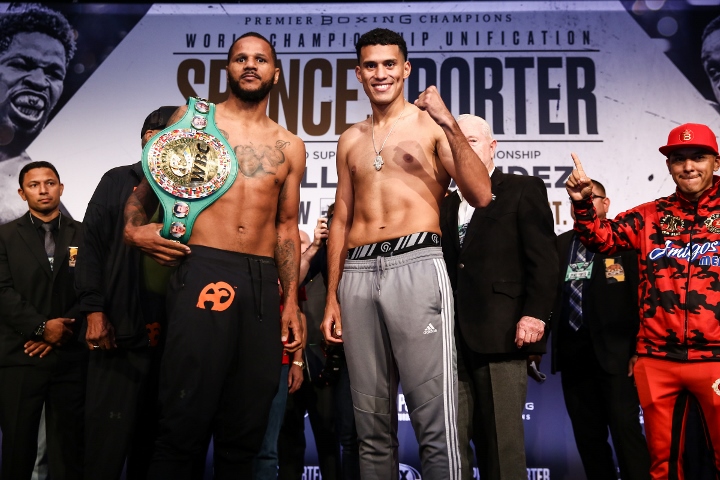 Dirrell (33-1-1, 24 KOs), of Flint, Michigan, defeated Turkey’s Yildirim (21-2, 12 KOs) by technical decision February 23 at The Armory in Minneapolis. A ringside physician instructed referee Mark Nelson to stop a fantastic, back-and-forth fight in the 10th round due to a cut above Dirrell’s left eye.

That cut was caused by an accidental head-butt during the ninth round. By PBC, Benavidez referred to Al Haymon’s Premier Boxing Champions, the organization with which Dirrell and Benavidez are affiliated.

Dirrell was ahead by the same score, 96-94, on two scorecards when that fight was stopped. He was behind, 98-92, on the third card.

A disbelieving Dirrell disputed Benavidez’s version of what happened when he beat Yildirim.

“Save me? Stop the fight?,” Dirrell yelled at Benavidez. “Man, it was a cut. I didn’t want the fight stopped. You know that. Wait. Wait, wait, wait, wait! You’re contradicting yourself again, man. You just told the world on FOX “Face To Face,” that I won the fight, beat him convincingly. What is it? Come on, man. Tell the truth! You know I was beating that boy! You know I was beating him!”

The 22-year-old Benavidez is regularly listed as a 10-1 favorite over Dirrell in advance of their 12-round, 168-pound championship match. FOX Sports will air it as the co-featured bout before welterweight champions Errol Spence Jr. and Shawn Porter meet in their pay-per-view main event.

Benavidez reiterated toward the end of the press conference at the Intercontinental Los Angeles Downtown hotel that he’ll knock out Dirrell. The defending champion has lost only a 12-round majority decision to Badou Jack in April 2015.

“I’m just looking to make a statement and I wanna steal the show,” Benavidez said, “and that’s exactly what we’re gonna do.”

Yeah.. This is fire! I'm loving it! I love this game! Boxing fans win tonight!!!

Benavidez is gonna batter Dirrell.He's too fast,hits too hard and Dirrell doesn't bring the smoke.He's a part-time fighter as it is.It'll be over when Ben puts the heavy smoke on him. Six to eight rounds at the very best.

Funny how both Benevitez and Spence down play their opponents during the whole build up. They basically telling us the outcome Benevitez literally said PBC is feeding you to me. Spence is saying porter is a strong street fighter and…