Benavidez: That Was A Bitch Punch Crawford Threw At Weigh-In

OMAHA, Nebraska – By inciting Terence Crawford to throw a punch at him after they weighed in Friday, Jose Benavidez Jr. senses he has an advantage over Crawford entering their fight Saturday night.

Crawford threw a right hook that missed Benavidez, who moved backward on the stage. Benavidez pushed Crawford first, though, as they came face-to-face. 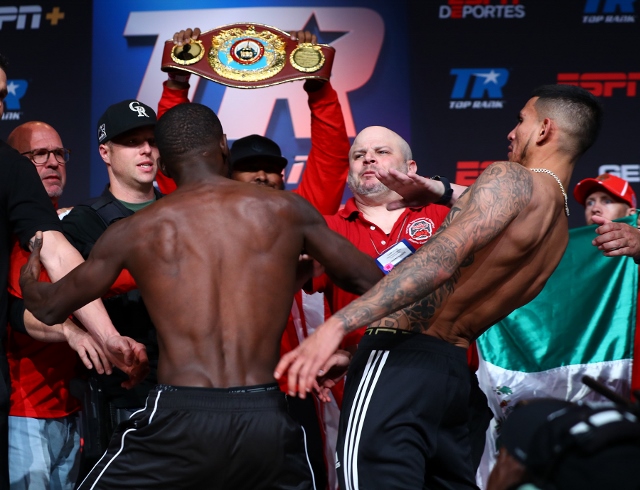 “They’ve been telling me to be cool all week,” Crawford said. “I’ve been cool and I’ve been keeping it professional. And he pushed me.”

Security personnel and employees for promoter Bob Arum’s Top Rank Inc. quickly got between Crawford and Benavidez. Both boxers were ushered off the stage and headed in different directions before the situation worsened.

The 31-year-old Crawford (33-0, 24 KOs) is listed by most Internet sports books as at least a 25-1 favorite over the unbeaten Benavidez. Phoenix’s Benavidez (27-0, 18 KOs) contends he’ll prove the three-division champion is overrated by pulling off what would be boxing’s biggest upset of 2018 in Crawford’s hometown.

“I’m ready for anything that comes my way,” Benavidez said. “I’m ready. I’m not gonna let their team get in my head, you know? I’ve got a game plan. I know what I’m gonna do and I’m gonna take him out tomorrow.”

The 26-year-old Benavidez reiterated that he doesn’t consider Crawford the elite fighter the Omaha native is commonly considered.

“I don’t see anything special in him,” Benavidez said. “It’s not overconfidence. You know, I have confidence in myself and I’m gonna do what I have to do tomorrow and I’m gonna be victorious tomorrow.”

Crawford promised that Benavidez will leave the ring Saturday night more impressed by him than when he enters it.

[QUOTE=Jab jab boom;19189026]so just to clarify what you wrote, you're rooting for benavidez because you (probably as a Mexican) want another Mexican to win and find benavidez to be a better looking guy than Crawford? Ok, that's fine but as…

When they get close enough that they are touching noses or foreheads then they have gotten too close. There should always be a promoter or security to make sure a faceoff doesn't come to punches. Come on guys, get it…

[QUOTE=1hourRun;19189051]Errol was talking about #strapseason last year, now its '' Hes on the other side of street doe! '':chomp:[/QUOTE] Come on dude!! That's not fair to say we don't know all the details. Lol Are you implying Spence is ducking…

Jose was it a b***h punch, Really?? Would you be saying that had he connected?? 😂

[QUOTE=mathed;19189036]After Bud picks Benevidez to pieces Spence is gonna start talking big about that 154 move, lol. :haha:[/QUOTE] Errol was talking about #strapseason last year, now its '' Hes on the other side of street doe! '':chomp: