Oleksandr Usyk was even better then Tony Bellew expected.

Bellew knew he would encounter one of the best boxers in the sport Saturday night in Manchester, England. The former WBC world cruiserweight champion was prepared well enough for that type of challenge to keep their scheduled 12-round fight very competitive through seven rounds.

Ukraine’s Usyk ultimately overwhelmed him and punctuated an impressive victory by whacking Bellew with a left hand that knocked him out in the eighth round. England’s Bellew was ahead on two scorecards (68-65, 67-66, 67-67) when referee Terry O’Connor stopped their fight exactly two minutes into that eighth round at Manchester Arena.

“I tried my best, but I’m just not – I’m a world-class fighter,” Bellew told Sky Sports. “That’s the difference between world class and elite level. It’s heartbreaking, man, because I gave this everything I possibly had. That’s the way it goes, so Oleksandr, I only wish you well. You are a great, great champion.” 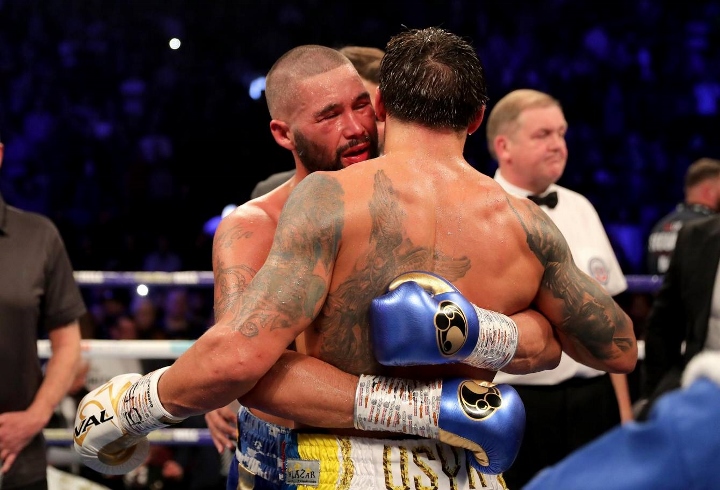 Usyk, 31, remained unbeaten (16-0, 12 KOs) and retained his IBF, WBA, WBC and WBO cruiserweight titles. Bellew, 35, reiterated that this loss will mark the end of his 11-year professional career.

Bellew basically was retired following his second technical-knockout win over David Haye when Usyk called him out July 21. Once Usyk mentioned Bellew’s name following his dominant win against Murat Gassiev in the World Boxing Super Series cruiserweight final, Bellew was determined to prove he could defeat one of the world’s best boxers.

Bellew acknowledged after just the second knockout loss of his career that he was wrong.

“I fought the very, very best,” said Bellew, who suffered his previous losses to Nathan Cleverly and Adonis Stevenson. “He’s just better than me. Just accept it, man. You come up against great people in life, and sometimes you lose – you’ve just gotta accept it. Oleksandr Usyk is pound-for-pound material. Man, I’ve got nothing but great things to say about him. He’s the best I’ve ever fought. He’s slick, he’s strong and he’s exceptional. And I give him his credit.”

Usyk could move up to heavyweight for his next fight and is expected to pursue a shot at British superstar Anthony Joshua, the IBF/IBO/WBA/WBO heavyweight champ. Bellew (30-3-1, 20 KOs) knows that the 6-feet-3 technician will be a difficult foe for even huge heavyweights like the 6-feet-6, 245-pound Joshua (22-0, 21 KOs).

“Fair play, man,” Bellew said. “He’s an exceptional champion. I’ve got nothing but respect for him. Anyone who faces him has got a lot of trouble. Only the very best and only the very biggest will find a way to beat him. He’s great.”

So this is the next UK Hope, who just beat a bum who got glorified for beating another washed up faded bum in David Haye, stop it

[QUOTE=ShoulderRoll;19264788]Adonis Stevenson knocked out Bellew faster than Usyk did. Just sayin'.[/QUOTE] shhhhh they dont want to be reminded about the truth. let them believe in their dreams :boxing:

[QUOTE=H-Tok;19264639]Usyk is not beating Joshua, Wilder, Fury, Ortiz, i give him a chance against Povetkin tho[/QUOTE] How big of a chance? :friday::beerchug:

[QUOTE=ShoulderRoll;19264788]Adonis Stevenson knocked out Bellew faster than Usyk did. Just sayin'.[/QUOTE] Exactly, you’d think he knocked out Joshua the way these Fanboys are taking already. It’s so comical !