Bellew: I'd Deal With Fury Swiftly, Viciously Like I Did Haye

Tony Bellew is very confident that he would do a real number on Tyson Fury - despite the size difference.

Bellew, who previously captured a WBC cruiserweight title, made his heavyweight debut in March 2017 with a stoppage win over former heavyweight champion Davie Haye in eleven rounds.

In their May rematch, Bellew stopped Haye even quicker and in more brutal fashion, when the contest was waved off in the fifth round. 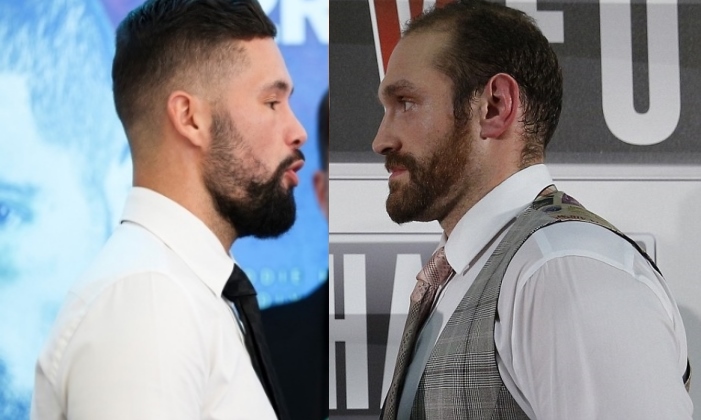 Fury made his anticipated return earlier this month, when he stopped Sefer Serefi in four rounds in Manchester.

The contest was the first for Fury since stunning Wladimir Klitschko in November of 2015.

He is scheduled to fight again on August 18th in Belfast, as part of the Frampton vs. Jackson undercard. The opponent has yet to be set,

Fury, at 6'9, believes that he's too big and too strong for the much smaller Bellew.

The Liverpool star believes the opposite - predicting a vicious end to Fury's comeback.

"I think Tyson looked at me when he was on his way back and thought 'yeah that's a nice, easy fight', and then he's just seen what I've done to David Haye and he's thought, you know what, I've got to take this guy seriously.

"No one has ever done to David Haye what I've just done to him. I bullied him, I beat him up, and I stopped him in emphatic fashion. No one's ever done that.

"People will say 'Tony didn't beat the proper David Haye'. I gave you that the first time round. The second time I showed you the real me, the real man who's got used to fighting at over 14st 4[lbs].

"If I fight Tyson Fury, I will deal with him swiftly and viciously, the exact same way I dealt with David Haye in the rematch."

[QUOTE=hugh grant;18882279]Lennox Lewis will be the first to tell you holyfieldls was best he fought. And Lennox was big. Belle w has a chance as guys 6foot 9 can't fight. There comes a time when your too big[/QUOTE] Fury can…

[QUOTE=SuperHanz;18882150]Holyfield wasn't facing giants like Fury, Wilder, Klitschko etc. Evander is my guy but the division has changed.[/QUOTE] Lennox Lewis will be the first to tell you holyfieldls was best he fought. And Lennox was big. Belle w has a…

[QUOTE=hugh grant;18877940]Belle w could best fury. How many times does a cw have to beat a hw before people can accept it can happen and often. If holy field can become one of the greatest ever. To find out who'd…

Truly, boxing needs someone to send Fury to the laboratory just that he fulfills his dreams and quickly