Barrios: Mikey Garcia Would Be A Great Option For My Next Fight

However much of a longshot he would be to land such a fight, Mario Barrios is willing to throw his name in the hat of foes looking to challenge Mikey Garcia.

The unbeaten San Antonio native holds a secondary version of the junior welterweight crown, a division which Garcia chose to leave behind in his pursuit of a welterweight title. The former four-division titlist—who has previously held the lineal championship at 140—has insisted that with the major belts at the weight being tied up, that his best option was to pursue bigger game at welterweight.

Should he ever change his mind, there will be at least one titleholder ready to welcome him with open arms.

“Mikey Garcia would be a great option,” Barrios (25-0, 16KOs) noted when asked about such a fight during a live chat on the Premier Boxing Champions (PBC) Facebook page. “I feel like he’s made a tremendous name for himself and getting close to that legend status for all that he’s accomplished, multi-division world champion.” 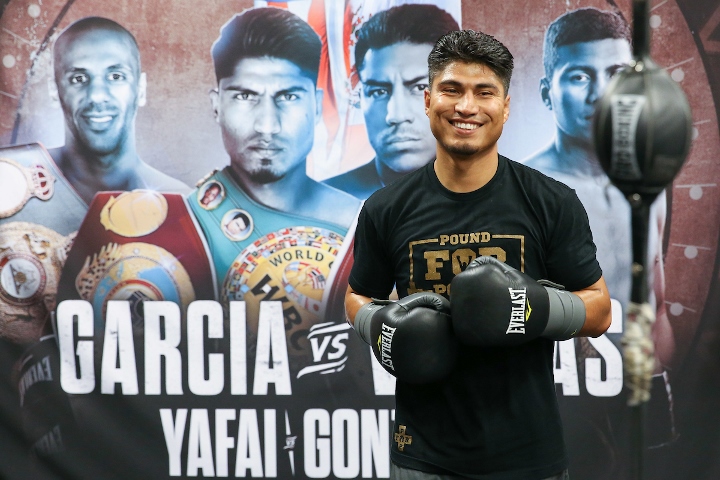 Barrios has been out of the ring since his hard-fought 12-round split decision win over Batyr Akhmedov (7-1, 6KOs) last September in Los Angeles, California. The bout was competitive enough to where a rematch was ordered by the World Boxing Association (WBA), whose secondary title was at stake. The fight couldn’t take place until at least this past March, though, given the injuries suffered by Barrios in their all-out war.

An official update on when they were due to rematch never surfaced, due to the ongoing coronavirus disease (COVID-19) pandemic which has all but shut down the sport. Steps are being taken to try to get boxers back in the ring once the world is a safer and healthier place, with Garcia (40-1, 30KOs) already calling out all of the top welterweights.

Left off of his list were the pair of unbeaten and unified titlists in Josh Taylor (16-0, 12KOs) and Jose Carlos Ramirez (25-0, 17KOs), both of whom are tied up with mandatory challenger obligations and keen on eventually facing each other. In the way of active and available titlists, that leaves Barrios as the best shot at trying to bring the California native back down to a weight division more befitting his frame.

“I trained with him a little bit when he was out there in the Bay Area getting ready for the Spence fight,” Barrios notes of his personal relationship with Garcia, though not to the point in standing in the way of a fight. “Great gut to be around, very uplifting, very encouraging.

[QUOTE=daggum;20551608]you can give a fighter a 10-8 round without him scoring a knockdown. in fact it should be done more for dominant rounds where you hurt your opponent and more even rounds should be scored when neither guy clearly wins…

[QUOTE=richardt;20551190]Boxing needs to fix a fatal scoring flaw!: No way should a fighter get two points for a flash knockdown while the other guy who beats him pillar to post only gets a 1 point round!! Simple, who dished out…

Boxing needs to fix a fatal scoring flaw!: No way should a fighter get two points for a flash knockdown while the other guy who beats him pillar to post only gets a 1 point round!! Simple, who dished out…

barrios stepped up in competition his last fight. received a good beating, but still got the nod. back to the gym and tighten up some more kid,. you have time.

I forgot they robbed the other dude in my mind Barrios had an L already, i think Barrios would adjust and now really win the fight, I think Mikey KOs him