Barrios: I'm Ready To Give Akhmedov Any Kind Of Fight He Wants

It’s not that Mario Barrios doesn’t care about the deep amateur pedigree his next opponent, Batyr Akhmedov brings to the table.

Well, actually he doesn’t—at least not the way of it being a concern ahead of their upcoming fight.

The pair of unbeaten 140-pound contenders collide for a vacant secondary title on Sept. 28 at Staples Center in Los Angeles, Calif. Their Fox Sports Pay-Per-View preliminary bout comes in supporting capacity to a welterweight title unification clash between Errol Spence and Shawn Porter, but the winner of this contest will become the latest player in a rapidly growing field of talent in the super lightweight division.

“It's definitely sunk in, which is why we really made sure we’ve done everything in training camp in preparation for this fight.,” Barrios (24-0, 16KOs) said of the moment that awaits him. during a recent media conference to discuss the event. “I'm well aware of the opportunity. I’m well aware of the guy I’m going to be facing come fight night.

“It’s been a lot of motivation, no pressure at all. I’ve been well aware for a long time of the opportunity in front of me. Nothing will get in the way of that.” 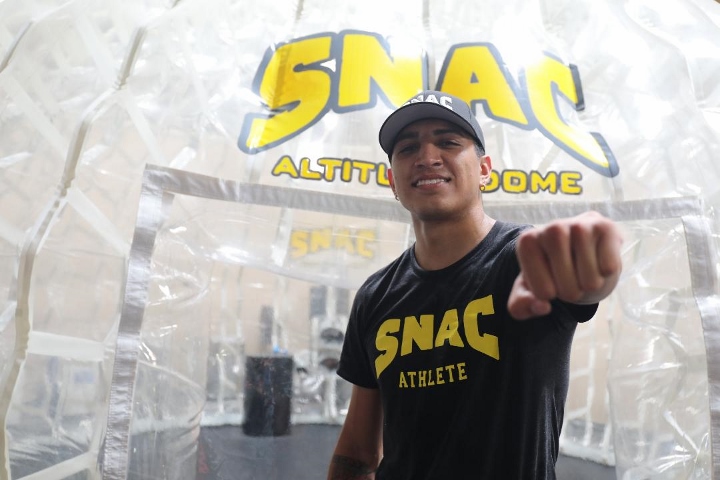 The 24-year old San Antonio (Texas) native carries an eight-fight win streak into the fight, a run which is one bout longer than the entirety of his opponent’s pro career. Akhmedov (7-0, 6KOs)—an Uzbekistan-born southpaw who lives in Russia—enters the biggest fight of his career with all of 31 months of pro experience, though boasting a rich amateur career which includes having represented Turkey in the 2016 Rio Olympics.

The 28-year old went 10 rounds in his third pro bout and survived his lone career knockdown in his 5th pro fight, a 9th round stoppage of former interim titlist Ismael Barrosso last August.

“Akhmedov has an impressive amateur resume. He has experience coming in with him. But one of the first times going into a fight, I’m actually the veteran. The pros and amateurs and the pros are two different ball games. I’m going to use everything that I’ve learned in my 24 pro fights and put everything to use.”

Barrios has offered the full arsenal over his entire run at super lightweight since moving up in weight for good in late 2016. He enters riding an eight-fight win streak, all inside the distance and coming in a variety of ways including a two-round blitzing of Juan Jose Velasco this past May live in primetime on Fox.

It’s safe to say that each contender represents the best the other has faced to date. The difference could very well be which of the two is the most aware of what lies ahead.

“I'm not saying at al that I'm overlooking Akhmedov. I'm expecting the best version of him that possibly ever shows up,” insists Barrios. “But I've had a great camp for this fight. I know I’m ready to give him any kind of fight that he wants.”

Barrios may not be a Haney, but Batyr is worse than that last guy. At least he had 11 fights. Akhmedov is C class getting rushed, he stayed too long fighting kids. Barrios is going to poke him to death.