Mario Barrios and Batyr Akhmedov were ordered more than a month ago by the World Boxing Association (WBA) to negotiate terms for a vacant title fight. Little has since been said about the pairing, but it has resurfaced in a big way.

The evenly matched showdown between unbeaten rising contenders will serve as a preliminary bout to the Sept. 28 welterweight title unification bout between Errol Spence and Shawn Porter, which takes place at Staples Center in Los Angeles, Calif.

The event will air live on Fox Sports Pay-Per-View, with all participants due to meet the press for a late morning session Tuesday in Los Angeles. Also on hand will be Josesito Lopez and John Molina Jr., both of whom collide in what figures to be a wild battle of California-based welterweight gatekeepers. 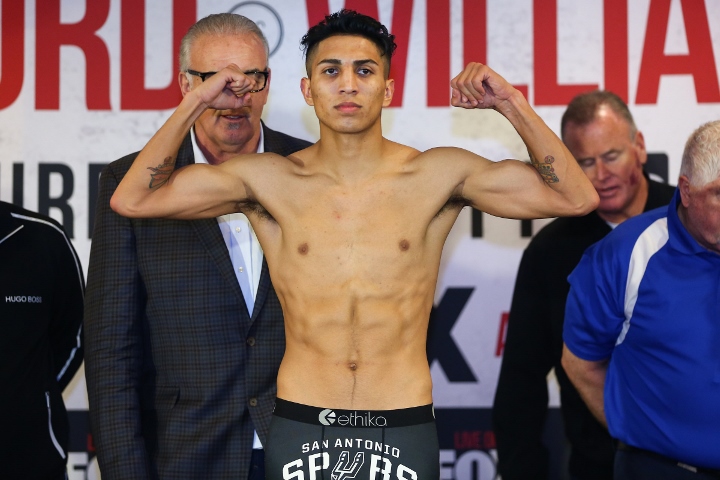 Barrios (24-0, 16KOs) and Akhemedov (7-0, 6KOs) began negotiations in early July for the ordered super lightweight title fight,  both carrying lengthy knockout streaks heading into what is the biggest fight for each to date.

San Antonio’s Barrios racked up his eighth consecutive stoppage with a two-round dismantling of Juan Jose Velasco this past May in Fairfax, Va. The win came two weeks prior to the most recent victory for Akhmedov, a 24-year old southpaw from Russia by way of Kazakhstan who earned a 5th round stoppage of Francisco Piña this past May in Mexico.

The bout will mark just the third stateside appearance for Akhmedov, who is managed by Vadim Kornilov. His most recent fight in the U.S. also doubles as his most notable win to date, scoring a 9th round knockout of former lightweight titlist Ismael Barroso last August.

The winner will claim the WBA “Regular” super lightweight title.

No belt is required to motivate Lopez and Molina Jr. in the ring. Both are in need of a win, and almost never disappoint when it comes to delivering crowd-pleasing bouts.

Lopez (36-8, 19KOs) saw his stock soar in his most recent defeat, giving a comebacking Keith Thurman all that he could handle before falling short in a 12-round majority decision this past January live in primetime on free-to-air Fox. The bout disrupted a three-fight win streak stretched over four years following a stoppage loss to former welterweight titlist Andre Berto in their March 2015 Spike TV-aired thriller.

Molina Jr. (30-8, 24KOs) has been in his own share of thrillers, including a valiant-in-defeat stoppage loss to Lucas Matthysse in April 2014. The bout was hailed as the Fight of the Year by the Boxing Writers Association of America, although also the start of a rough patch which has seen him lose six of his last eight bouts.

It never deterred the 36-year old from taking tough assignments, including a hard-fought loss to then-unbeaten Omar Figueroa Jr. this past February on Fox and what was to be a Fox Sports PPV preliminary clash versus former 140-pound titlist Sergey Lipinets in July. The crossroads bout was to serve in supporting capacity to Manny Pacquiao’s eventual 12-round win over Thurman, only for Molina to suffer a back injury just days before the show and was forced to withdraw.

Apparently, he is all healed up and ready for the latest ‘win-or-go-home’ assignment in his never-die career.

Ahmedov is by way of Uzbekistan, not Kazakhstan

[QUOTE=IRONCHINHAGLER;19983288]Loading the undercard with Hispanic fighters - desperate for Ppv buys bc the main event is not very appealing to Hispanics or casuals. Molina v Lopez is a joke for Ppv though....which one has the most brain cell left?[/QUOTE] Nobody…