Barrera Eyes Kovalev: I've Been Chasing Him My Whole Career

Twice before, Sullivan Barrera was in position for a dream fight before ultimately settling for the next best thing.

“I only want big fights, my goal is four more fights and then retire,” Barrera (22-2, 14KOs) told BoxingScene.com upon his officially signing with Top Rank, which will kick off with a June 8 ESPN-televised clash versus Michael Seals in Reno, Nevada. 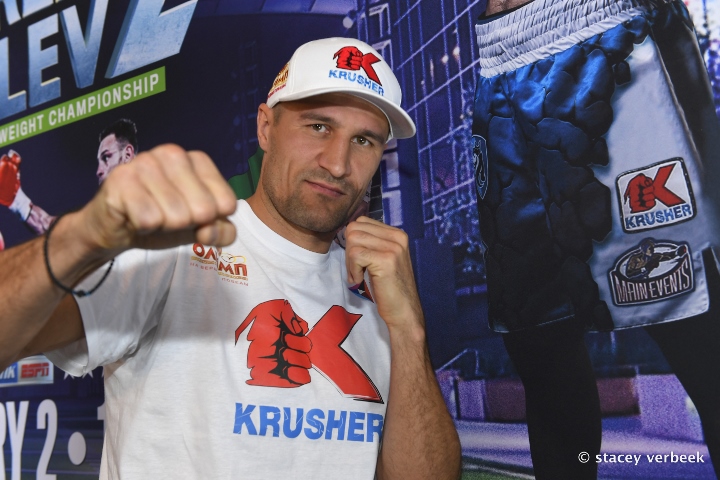 The bout will serve as a re-introduction to the light heavyweight landscape. Top Rank—through its partnership with ESPN—holds most of the relevant pieces to the puzzle, including undefeated World (lineal) 175-pound king Oleksandr Gvozdyk , along with titlists Artur Beterbiev and Sergey Kovalev, the latter whom is aligned through a co-promotional deal with primary promoter Main Events.

Fights with all three are very much on his radar, particularly a clash with Kovalev whom he sought to face during the Russian’s previous two title reigns

“That has always been my dream fight,” admits Barrera. “This is now my wish (with Top Rank), to fight this guy I’ve been chasing my whole career.”

Barrera was in line for a crack at Kovalev in 2016 when he instead agreed to a non-title fight versus unbeaten pound-for-pound king Andre Ward, whom had just moved up from super middleweight. The affair resulted in Barrera’s first career loss, while Ward would go on to twice face and defeat Kovalev before retiring after their June 2017 rematch.

Another chance to face his longtime rival came when Kovalev regained one of his titles in Nov. 2017. Both would appear on a March 2018 featuring the first defense of his second title reign, but Barrera would challenge for a different belt that evening.

It didn’t go as planned, as the Miami-based Cuban boxer was stopped in 12 rounds by unbeaten Dmitry Bivol in a supporting bout to Kovalev’s win over Igor Mikhalkin. It was his lone successful defense, losing the title by knockout to Eleider Alvarez last August before regaining the strap this past February in his aforementioned Top Rank and ESPN debut.

Barrera’s lone bout since his title fight loss to Bivol came last November, outpointing Seanie Monaghan over 10 rounds in what would be his last appearance under Main Events. It ended without being able to land his dream fight, although with such hopes restored now that both are fighting for Top Rank and on ESPN.

“Hopefully, we can get that fight later this year,” Barrera notes.

I'd like to see that fight. I met Sullivan last year. Walked into the gym and he was the only one there and I got to sit next to him & talk to him while we watched a fight. What…

Seals would be his 1st, then Kovalev, 3rd could be Gwozdyk or Beterbiev and final vs some winnable opponent to end the deal

Barrera says he’s got four fights left before retirement This would not be a wise choice on his part , not a fan of Kovi , but I do believe he would finish Barrera off Their would be no 2nd…

would love to see the fight, I got kov for the win tho but who knows

Not interested in this fight, there are better fights for Kovalev.