by Tamas Pradarics at Ringside

Former amateur standout Balazs Bacskai (1-0) made his highly anticipated professional debut a successful one as he won a clean ten-round decision over former amateur teammate Norbert Harcsa (8-1, 1 KO’s) on Saturday night in Hungary.

Harcsa chose to trade with his psychically stronger counterpart in order to wear Bacskai down to the later rounds in front of a jam-packed arena of spectators in Budakalasz.

The latter, however, refused to be the victim of such tactics and fired back at Harcsa. Bacskai was able to maintain his pace down the road and won the vast majority of rounds over a game Harcsa to get a clean decision win after ten fast and entertaining rounds. Scores were 98-92, 98-92, 96-94 for the debutant pugilist who also grabbed the vacant Hungarian Title at middleweight. Bacskai made history in winning the national belt in his very first pro fight. 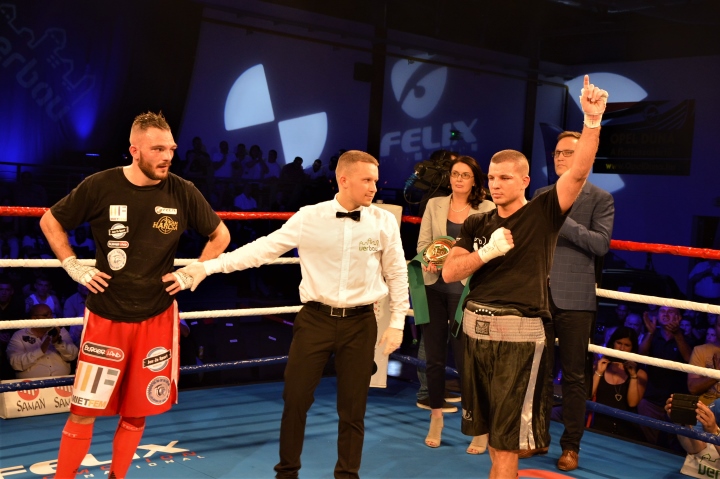 Reigning super featherweight WBO European champion, Zoltan Kovacs (20-5-1, 6 KO’s) showcased his skills yet another time in defeating previously unbeaten Dato Nanava (8-1, 3 KO’s) with a unanimous decision over eight frames. Kovacs started fast to feel out the durability of his Georgian foe and settled his pace from round two. Nanava was gutsy and brave. Kovacs is ranked #8 by the WBO at 130 pounds and he is expected to defend his Euro title in the fall.

Denys Berinchyk (6-0, 3 KO’s) had his first fight outside of his native Ukraine when he faced former world champion Lorenzo Parra (32-11-2, 19 KO’s). Berinchyk was part of the Ukranian Dream Team in the 2012 London Olympics, where he won a silver medal. In this bout, however, he had a tough time to shine as Parra had an awkward, defensive-minded performance to somehow stay in the fight. Berinchyk dropped the former WBA flyweight champion four times en route to an eight-round shutout.

In an upset, journeyman Laszlo Fazekas (31-27-1-1, 18 KO’s) found a way to a decision win over Zoltan Kispal (7-2, 5 KO’s) in a bout for the vacant Hungarian Title at super welterweight. Fazekas was more active and used his movement to confuse Kispal. The latter forgot to settle his offense and was unable to land the big one.

Reigning Hungarian champ Balazs Torteli (13-1, 5 KO’s) won on points in six heats over Bakar Gelenidze (4-2-1, 3 KO’s). Torteli was rocked in round four with a body shot but came back to handle his tough Georgian opponent in the last two rounds. It showed something about the character of the 25-year-old Hungarian fighter.

The card was promoted by Felix Racz’s Felix Promotion and was televised by M4 Sport as well as by a Ukranian TV station.