Badou Jack: This Is Not A Real Or Normal Fight Card, It's More Of An Event

Badou Jack has been on bigger stages than the one on which he will next arrive.

That said, the event will mark a rare time in his established career where he truly won’t know what to expect—in or out of the ring.

“This is not a real fight card, not a normal fight card. It’s more of an event,” Jack notes of his placement on the undercard of Saturday’s exhibition match between ring legends Mike Tyson and Roy Jones Jr. “I get it.

“I’m not used to fighting before a couple of YouTubers but it is what it is. I think of it as donating to my charities.” 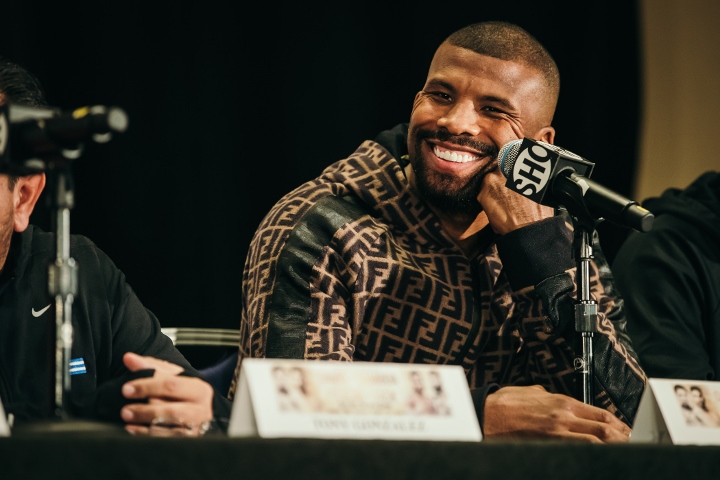 For his part, Jack (22-3-3, 13KOs) will face Sacramento’s Blake McKernan (13-0, 6KOs) in a scheduled eight-round cruiserweight bout at Staples Center in Los Angeles (Saturday, Triller Pay-Per-View, $49.99 SRP). The move up in weight is likely a one-stop trip for Las Vegas’ Jack, a 2008 Swedish Olympian and former two-division titlist who remains in the hunt for a second light heavyweight title reign.

Meanwhile, Jack will bide his time versus McKernan, an unbeaten but unheralded 33-year old cruiserweight prospect who steps well up in class. It’s a significant drop from Jack’s top-shelf run over the past five years, where his last eight fights have all come versus former or current champions and titleholders beginning with a 12-round win over Anthony Dirrell to claim a super middleweight belt in April 2015.

Still, it is means to keep the line moving while waiting for a return to more meaningful fights such as a rematch with Jean Pascal against whom he dropped a disputed 12-round split decision last December.

“Definitely wasn’t familiar and still not familiar with him,” Jack admits of McKernan. “They said it was supposed to be an exhibition at first. I’m not really into exhibitions. Then they said it was a real fight. So, I guess this is the guy they picked.

“It’s just another day the office.”

Strangely, it’s the most significant pure boxing fight of the evening. The event also includes an MMA fight and a boxing matchup between YouTube personality and boxing novice Jake Paul and former NBA star and three-time slam-dunk champion Nate Robinson, who makes his pro debut.

Between that bout and a pair of 50+ year old ring legends coming out of retirement for a heavily-restricted exhibition all on a streaming app, it’s only natural to expect a circus-like atmosphere.

Jack can relate to that part of a night, to a certain degree. His knockout win over Wales' Nathan Cleverly to earn a light heavyweight strap came on the August 2017 undercard of his promoter, Floyd Mayweather’s ring return following a two-year “retirement” as he scored a 10th round knockout of UFC superstar and boxing debutant Conor McGregor. The Showtime PPV event was more spectacle than substance, though still landing as the second best-selling show in boxing history.

Whatever comes of Saturday’s event in Los Angeles, the 37-year old former champ and current philanthropist will continue to make the most of any opportunity which comes his way.

“I’m looking forward to this fight. To me, this is for charity,” admits Jack. “This is for the Badou Jack foundation. All the proceeds go to my foundation to help kids around the world and give them a fighting chance. I’m going to win this fight and then go on to the next one.”

anyone with a link, please in PM if poss

A nice tune up fight for Badou after all the tough opponents he's had. He's not had a tune-up fight since he fought Nathan Cleverley.

Well this a great opportunity to gain more attention and followers.i wouldn't complain