It’s 2020, so if Mike Tyson can return to the ring to face Roy Jones Jr., former two-division champion Badou Jack can also make his first appearance of the year on the undercard against Blake McKernan.

Yeah, “The Ripper” never saw this coming, either.

“I would have never thought that,” he laughed about appearing on the same card as the boxing icons this Saturday in Los Angeles. “I was kind of shocked when Tyson and them called me about this. It's kind of weird, but I've always been a huge fan of Mike and Roy, and both of them are friends, so it's gonna be good.”

It is one for the memory book, something Jack can tell his two kids about, but as far as this being a fight to propel Jack back to the top of the light heavyweight division after a razor-thin split decision loss to Jean Pascal last December, this isn’t exactly it. And Jack knows it, but he does admit that some trash talk from the unbeaten, yet unheralded McKernan has got him a little more fired up than he might have been.

“To be honest, I fight better when I fight a better opponent,” he said. “But with this guy, he's been talking like crazy, so that's been motivating me. All right, I'm gonna hurt him and I want to show him there's levels to boxing. It's kinda like that guy who fought Mike Tyson in his comeback fight, Peter McNeeley. He was a crazy guy that just talked a lot and can't really fight. That's how I see him. He's been talking crazy, even in the press conference. I was laughing, but that's been motivating me to train even harder.”

The bout does serve a couple purposes for Jack. First off, it keeps him busy in a year when he expected to be fighting Pascal a second time in May. That didn’t happen thanks to the COVID-19 pandemic, but he expects to get back in the ring with the WBA champion early next year. Or, if he has his way, sooner than that.

“We're gonna fight in the first quarter of next year, so whenever he's ready,” Jack said of the Pascal rematch. “I could fight him on Sunday, the day after I fight this guy. (Laughs) I'm waiting for him, to be honest. From what I'm hearing, it's that he wants his regular purse or whatever he's got in his contract; he wants to get paid for a tough fight, which I understand and respect. But when there's no fans, you can't get paid the same thing. We're in the pandemic, so it's kind of hard. So they said first quarter of '21, so whenever that is, I'm ready in January, February, March - whenever he's ready, I'm ready.”

“Or if I make quick work of this guy, we can do it that same night.” 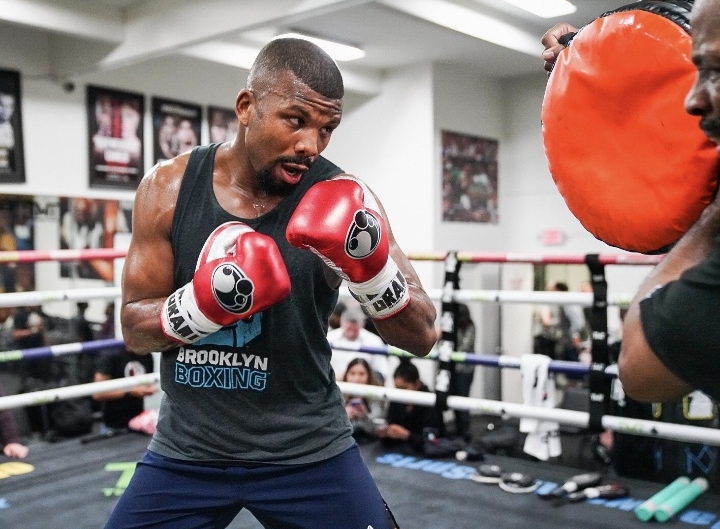 Jack laughs, in good spirits before the fight and feeling ready to throw hands for the first time with Johnathon Banks in his corner. It’s been a good fit thus for the Sweden native, who believes that after a series of close decisions not going his way over the years, including the one with Pascal, he’s going to have to bring the thunder to keep the judges out of the equation. So if you’re wondering, there’s still plenty of stuff in the basement for the 37-year-old.

“I've got that will to win and I want to prove everybody wrong,” Jack said. “I hurt all of them. I hurt Pascal, dropped him. I hurt (Adonis) Stevenson, I dropped (James) DeGale and (George) Groves. So I have the power, I just gotta put it together. And I've got a new trainer, Jonathan Banks, and we've been working a lot on it and I feel great. I'm not gonna say what I'm doing in sparring and stuff, but I feel great and I feel like other than the Marcus Browne fight, which, to be honest, it looked worse than it was and it was a cut, I haven't taken so much punishment in my career. I've been in tough fights, but I haven't been beaten up or anything. The Marcus Browne fight, I was bleeding a lot, but he never hurt me or nothing.”

Suffice to say that when your resume contains the names Anthony Dirrell, Groves, Lucian Bute, DeGale, Nathan Cleverly, Stevenson, Browne and Pascal – in a row, no less – going 0-2-1 in your last three can be excused. Yet despite any negative talk, Jack has never gone down that route. Sure, he’s expressed his feelings about decisions he thought he should have gotten, but he earned that right and he’s always carried himself with class and as an ambassador of the sport. That brings us to the second and most important reason for him stepping between the ropes this weekend, and that’s to raise money for the Badou Jack Foundation. In fact, Jack is donating all his proceeds from the fight with McKernan to his non-profit, which was created to help children around the globe.

“I've got kids myself and the focus is mostly on kids - orphans and refugee kids,” Jack said. “I'm a Muslim, and to serve God, you've got to serve your fellow man, so it feels like it's my duty, especially since I have this platform as a champion, so why not use it for something positive? I've mostly been doing this quietly, but my business manager, Amer Abdallah, he's been on me, saying let's start a foundation and maybe we can help more people. So it's not really about me, it's about the kids.”

That’s not something you hear too often, or ever. But it shows the type of man Jack is.

“There's a lot of eyeballs on this fight, so it's the perfect opportunity,” he said. “Of course, I'm gonna go in there and try to knock this dude out, but this is not really about the fight. The fight is with Pascal, and I'm not overlooking him (McKernan) or anything, but this fight is dedicated to my foundation and whatever we can do to help people. I'm gonna go in there and put on a show, but it's dedicated to the foundation.”

There’s not much to say to follow that up, but I did have one more question for Mr. Jack: In this day and age, is it tough to be a good guy?

“Yeah, it is,” he laughs. “But in the long run, I hope being a good guy will last longer than someone being a bad guy. I never complain about what I get paid or nothing like that, and I already proved myself that I'll fight anybody. I already proved that I've got heart and I can box, so it's time to make the big money fights. I've already had the big fights, but it's time to get paid, especially when you get robbed so many times. But from now on, I can't depend on the judges; the only judges are the left hand and right hand.”

For more information on the Badou Jack Foundation, visit https://badoujackfoundation.org/

I always liked Badou and think he's gotten the short end of the stick on some decisions, but I just think that he's not spectacular enough at anything to get decisions and starts too late.

[QUOTE=57Blues;20908200]Well Jack I was surprised too when I saw that Tyson was fighting or whatever they are calling it today. But just when you think maybe Boxing can move in the better direction these type of cards show up. I…

Well Jack I was surprised too when I saw that Tyson was fighting or whatever they are calling it today. But just when you think maybe Boxing can move in the better direction these type of cards show up. I…