Badou Jack arrived in Toronto as a confident contender Wednesday.

The former two-division champ admits there were times that he wasn’t quite certain he’d actually get his shot at Adonis Stevenson. The Swedish-born boxer feels much more comfortable now that he has crossed the Canadian border for their 12-round, 175-pound title fight Saturday night at Air Canada Centre.

“It’s become more of a reality now that I’m here in Toronto,” Jack said Wednesday. “Now it’s just the countdown to fight night. My focus is making weight and becoming the new world champion. Nothing else matters. The trash talk, the critics, they don’t affect me at all. I’m younger, I’m stronger, I’m faster. I’m the better guy.” 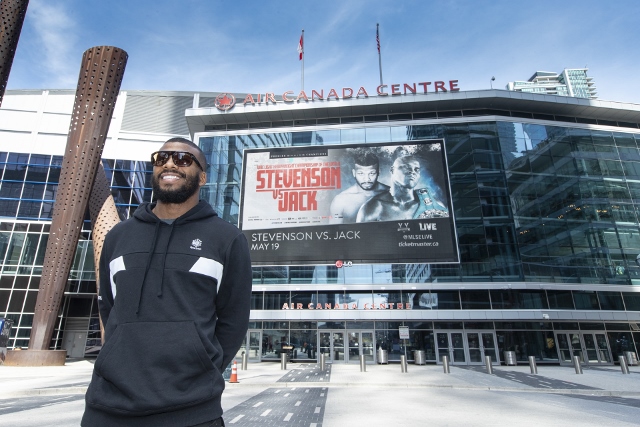 The 34-year-old Jack (22-1-2, 13 KOs) has won world titles at super middleweight and light heavyweight. He is a slight underdog against Stevenson (29-1, 24 KOs), who’ll make the ninth defense of the WBC light heavyweight title he won by surprisingly stopping Chad Dawson in the first round of their June 2013 championship match at Bell Centre in Montreal.

Jack has demonstrated remarkable improvement since Derek Edwards stopped him in the first round four years ago in Verona, New York. Five bouts before he stunned Jack, Edwards suffered a third-round knockout defeat against Stevenson in Montreal.

A rejuvenated Jack is 6-0-1 since Edwards (27-8-1, 14 KOs) upset him, including a controversial draw with Lucian Bute that was changed to a disqualification win for Jack once Bute tested positive for a banned substance following their 12-round fight for Jack’s WBC 168-pound title in April 2016 in Washington, D.C.

Stevenson-Jack, which was supposed to take place at Bell Centre in Montreal, is being billed as the biggest title fight in Toronto since Aaron Pryor beat overmatched Toronto native Nick Furlano to retain his IBF junior welterweight crown in June 1984.

The 40-year-old Stevenson was born in Haiti, but has lived in Quebec since he was 5. He defended his title once in Toronto, where he stopped Tommy Karpency in the third round at Ricoh Coliseum in September 2015.

“To have my fight here in Toronto, and for it to be the biggest fight in the city in 30 years is amazing,” Jack said. “I will become the new WBC light heavyweight champion in his own country, in his backyard.”

The doubleheader will open at 10:05 p.m. ET with a 12-round, 126-pound championship bout between WBC featherweight champ Gary Russell Jr. (28-1, 17 KOs), of Capitol Heights, Maryland, and mandatory challenger Joseph Diaz Jr. (26-0, 14 KOs), of Downey, California. Russell-Diaz will be the main event of a seven-bout card at MGM National Harbor in Oxon Hill, Maryland.

Jack might outbox the Duck but they’ll rob him for sure if it goes to the cards.

I think Jack's susceptible early but that may be offset by Stevenson's rust and lack of even average opposition. I expect Jack to be able to get past the early rounds without being diminished and then he will methodically break…

I'm rooting for him. Stevenson's the worst champion in boxing. Just lazy or scared or whatever. I will say, that I'm not confident in Jack's chin and Stevenson's left hand is as dangerous of a weapon as there is in…

[QUOTE=j.razor;18779113]I like Badou, he has been active in a more comfortable weight & got better, I cant say the same for Stevenson, he has not fought enough.[/QUOTE] True dat. You don't get better by not fighting, and Stevenson's timing won't…

I like Badou, he has been active in a more comfortable weight & got better, I cant say the same for Stevenson, he has not fought enough.