LOS ANGELES—Azat Hovhannisyan is one step closer to another world title opportunity.

The hard-punching and crowd-pleasing Armenian contender defeated Franklin Manzanilla in a one-sided washing via fourth round knockout during a WBA junior featherweight division eliminator on Thursday. The 122-pound fight headlined Golden Boy’s Thursday Night Fights series at the Belasco Theater in Los Angeles.

The 31-year-old Hovhannisyan (18-3, 15 KOs), who is trained by Freddie Roach, stopped Manzanilla two seconds before the fourth stanza with a dominant flurry along the ropes that finished the Colombian once and for all. Hovhannisyan is now riding a four-fight winning streak after losing his first world title shot against WBC champion Rey Vargas last year.

“This was a very easy fight at first,” said Hovhannisyan. “I could have made it a 12-round fight, and he would not have touched me. I wanted to make it a tough fight. I didn’t even feel his punches.”

“This was a great performance by Azat. Terrific,” Roach told BoxingScene.com from the locker room immediately after the fight. “He was too strong tonight with his overhand right hand. Azat’s improvement over the last few fights has been incredible. His boxing; his combinations. He used to be too rugged, and now he has more form. He’s matured so much from the Vargas fight. I would love to have that one back.” 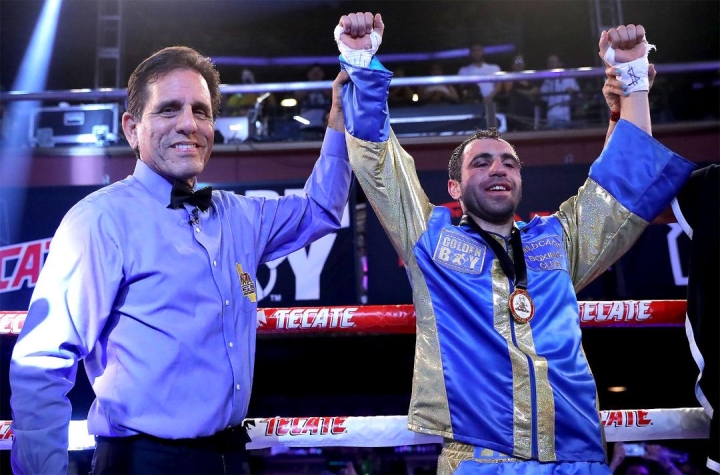 Manzanilla (18-6, 17 KOs), who lost to Vargas as well earlier this year, was dominated throughout the entire fight, and never seemed to show his power to hurt Hovhannisyan like he momentarily did Vargas in his fight with a second round knockdown.

“We knew that Azat Hovhannisyan was a good fighter,” said Manzanilla. “We also knew he was a warrior. But I’m a man who likes to clash too. I tried to box, but I had to fight because that’s what people pay to see. It was the wrong game plan, but either way I’m going to rest and see what opportunities are out there for me.”

A minute into the fight, both fighters started pressing the pace, relentlessly attacking the body. It was clear from the first fist that was thrown that this fight wouldn’t last the full 12 rounds. Hovhannisyan switched from orthdox to southpaw several times and got the better of the exchanges in the opening stanza.

Hovhannisyan momentarily stunned Manzanilla in the second round and delivered a crowd-pleasing onslaught that continued for most of the frame. He even showed some gamesmanship inviting Manzanilla in by waving his glove to his chest. He was confident and connecting with everything he was throwing, even timing a few punches from his hip.

“Crazy A” wanted to continue the clash in ferocious fashion in the third. He seemingly was walking through all of Manzanilla’s punches, never appearing hurt, and again invited his counterpart to mix it up at a higher rate.

Manzanilla shortly showed a better version of himself in the fourth, catching Hovhannisyan with a counter. But it was too little too late, as it apparently woke up Hovhannisyan. He unleashed an attack that eventually ended Manzanilla’s night.

Roman suffered a left shoulder injury during a sparring session on Aug. 17 and was forced to withdraw from his upcoming mandatory title defense versus Murodjon Akhmadaliev (6-0, 5 KOs) on Sept. 13 at the Hulu Theater in New York.

The 29-year-old Roman was diagnosed with tendonitis and will miss four-to-six weeks. It is unclear for now who Roman will face next, and how long he will need to fully heal.

In the co-main event, Edwin Valentin (9-0, 8 KOs) defeated Julio Bassa (21-9, 13 KOs) via unanimous decision in an eight-round lightweight battle by the three scores of 79-73 across all three cards.

“If feel happy. It was a fight that lasted the distance,” said Valentin. “I’m happy with Julio for giving me the opportunity. It was a fight with an experienced warrior. This fight will help on the long run because there’s big things coming.”

“I’m happy with the win. I boxed, and I boxed smart,” said Wilkins. “I fought a veteran, and I feel like I did great. What’s next? Whatever Golden Boy wants for me.”

“I was in there with a veteran,” said Acevedo. “He’s a tough guy, and he’s been in the ring with some great guys.”

“I thought I did great,” said Ousley. “I knew I had a tough opponent, but I wanted to put on a show for all the fans in Los Angeles.”

[QUOTE=BIGPOPPAPUMP;20040641]LOS ANGELES-Azat Hovhannisyan is one step closer to another world title opportunity. The hard-punching and crowd-pleasing Armenian contender defeated Franklin Manzanilla in a one-sided washing via fourth round knockout during a WBA junior featherweight division eliminator on Thursday. The 122-pound…