Azat Hovhannisyan: 'I have a lot riding on the line' vs. Manzanilla

Azat Hovhannisyan and Franklin Manzanilla will walk into the ring Thursday looking to further separate themselves from the pack in the junior featherweight division.

The hard-punching, 122-pound contenders will headline Golden Boy’s Thursday Night Fights in a 12-round WBA eliminator at the Belasco Theater in Los Angeles.

Hovhannisyan (17-3, 14 KOs) will be riding a three-fight winning streak after losing his world title shot against Rey Vargas last year, while Manzanilla (18-5, 17 KOs) will look to bounce back from also losing to Vargas in February.

“This is a very important fight for me. I have a lot riding on the line with a potential world title opportunity in future,” Hovhannisyan told BoxingScene.com. “I’m looking to prove that I can be in the ring with anyone.”

Hovhannisyan, a 31-year-old Armenian who’s trained by Freddie Roach, has been studying Manzanilla’s recent fight with Vargas. In that encounter, Manzanilla dropped the WBC and WBA champion Vargas with a powerful left hook only to lose a wide decision.

“Franklin is a strong fighter, physically. But that’s exactly what he is — a fighter. He’s not a good boxer,” said Hovhannisyan. “It appears that he has very good power, and that’s what makes him dangerous with the different angles that he presents.” 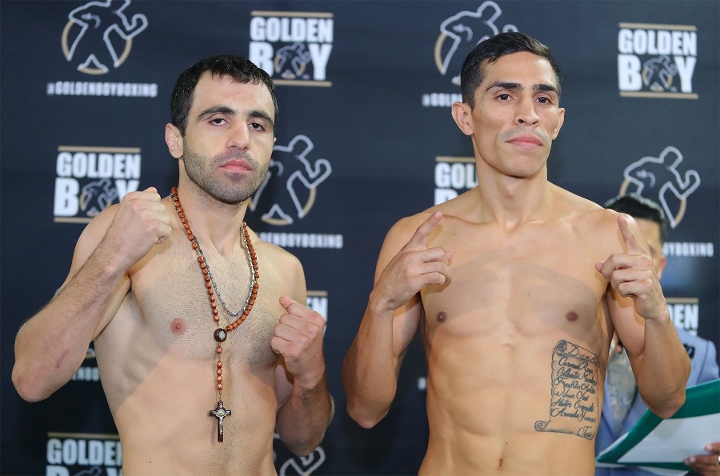 Hovhannisyan reflected back on his competitive decision loss to Vargas. He said that in hindsight, he took the fight too soon without giving his body time to recover. In March of last year, he beat Ronny Rios via sixth-round TKO and 64 days later in May, he was fighting Vargas for a world title.

“I learned in the Vargas fight that I need to be physically ready for 12 rounds. I was a little tired during the Vargas fight having trained without rest for as long as I did. Ideally, I would have liked to have 10-to-15 days to reset after the Rios fight, but I didn’t have that luxury when I was presented the opportunity. On top of that, I should have travelled to New York sooner than I did to better adjust as well. I learned from all of that, and now, I am training to become a world champion.”

Hovhannisyan said that Roach has advised “Crazy A” not to rush and go for the kill from the opening bell, but rather, be better calculated in order to methodically break down Manzanilla. One way the head-hunting Hovhannisyan plans to do that is by bringing a better body attack into his gameplan.

The Colombian upset Julio Ceja last year and will have a 2 ½ reach advantage, but Hovhannisyan envisions winning via knockout no later than the sixth round. He hopes the win catapults himself to a rematch with Vargas, or a chance to face other active champions like Daniel Roman, Emanuel Navarrete or past titlists like TJ Doheny and Tomoki Kameda.

Hovhannisyan-Manzanilla will be streamed live on RingTV.com and on Facebook Watch via the Golden Boy Fight Night Page beginning at 10 p.m. ET.