The hunt continues for a new opponent for Javier Fortuna.

So, too, does a new fight date to go along with the occasion.

A planned August 28 DAZN show featuring the former secondary 130-pound titlist from Dominican Republic will no longer move forward, three sources with intimate knowledge of the development informed BoxingScene.com. Fortuna was due to face former three-division titlist Jorge Linares (47-5, 29KOs), who was forced to withdraw on August 7 after testing positive for COVID-19. The inability to secure a replacement opponent in time prompted the DAZN brass to move off of the date, according to sources. 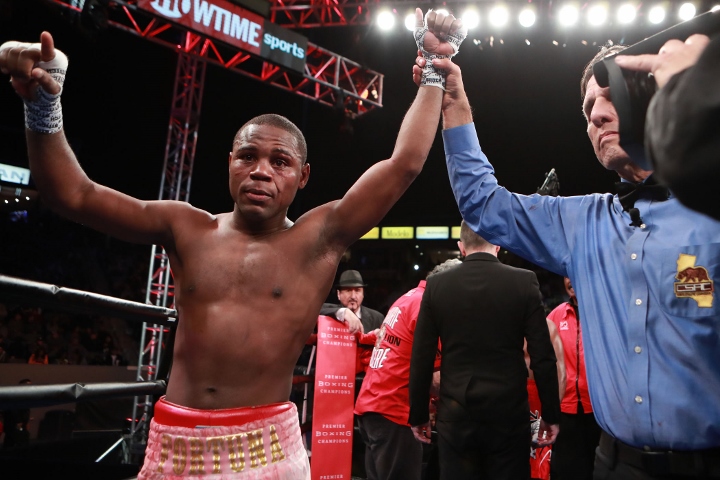 News of the postponement was first reported by ESPN.com’s Steve Kim.

The targeted bout between Fortuna and Linares—which was to have aired live on DAZN from a crowdless Fantasy Springs Resort Casino in Indio, California—was to establish a future title challenger for reigning World Boxing Council (WBC) lightweight titlist Devin Haney (24-0, 15KOs)—who also happens to be without an opponent for a planned voluntary title defense this fall. Fortuna (35-2-1, 24KOs) currently serves as the mandatory challenger, though was willing to risk that position versus Linares while Haney was granted an optional title defense by the sanctioning body for his first fight since recovering from shoulder surgery.

Linares accepted the fight after moving off of a targeted showdown versus unbeaten contender Ryan Garcia (20-0, 17KOs). The two appeared on the same DAZN card this past February in Anaheim, California, scoring knockout wins to set up what was hoped to have been a summer showdown. The ongoing coronavirus pandemic played a role in delaying those plans, although such a fight was never quite far along as was suggested in previous reports.

Garcia will now face England’s Luke Campbell (20-3, 16KOs) for the WBC interim lightweight title, while Fortuna is suddenly left without an opponent or secured fight date. Golden Boy Promotions—who doesn’t promote Fortuna but agreed to keep him on the card in the main event—scrambled to find a new opponent, though the options presented were deemed unacceptable by DAZN, according to sources.

Fortuna has been out of the ring since a 2nd round knockout of Jesus Cuellar last November. He has now seen two separate fight dates fall through due to COVID-related reasons. Pre-pandemic plans called for a vacant title fight versus Campbell on April 17 in Oxon Hill, Maryland, with the entire show canceled due to the initial wave of the ongoing global health crisis.

Sources inform BoxingScene.com of tentative plans to reschedule the August 28 show for mid-to-late September. Such plans, of course, remain dependent on an acceptable main event being in place.

[QUOTE=Get em up;20716576]I've still not figured out why it was Fortuna vs Linares to begin with. Haney vs Fortuna is the fight to be made. Somebody wont let their balls drop and they need to.[/QUOTE]I believe that was something the…

[QUOTE=Eastlos;20716891]Actually, it was Tanaraja’s new manager Rick Mirigian who told Eric Gomez that Hector needs more time to prepare for Fortuna. Which is BS since Tanajara had accepted the fight earlier, that mofo Mirigian did that to protect his own…

[QUOTE=GBP4LIFE;20716862]Supposedly Tanajara said he needs additional time.. Makes no sense..[/QUOTE] Actually, it was Tanaraja’s new manager Rick Mirigian who told Eric Gomez that Hector needs more time to prepare for Fortuna. Which is BS since Tanajara had accepted the fight…